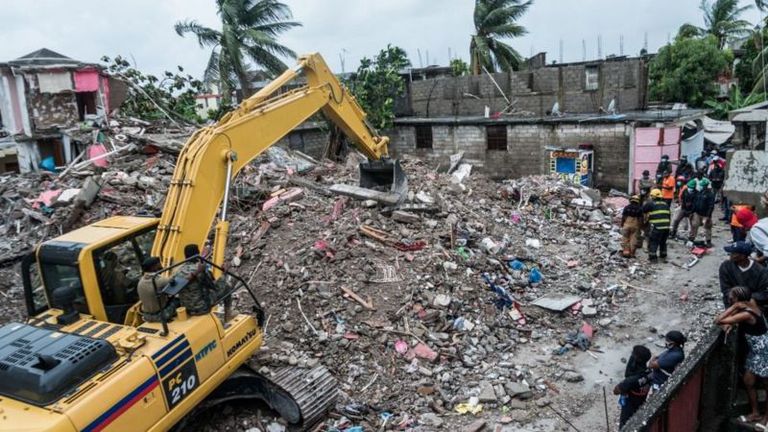 
PORT-AU-PRINCE.- Five consecutive earthquakes terrified the Haitian population this morning. The earthquakes ranged from 5.3 and 4.3 Richter degrees, according to him Iris seismological system of Washington. The movement of the plates passing under the island caused two deaths and destroyed 35 houses in the department of Nippes, to the southwest of the country. According to the Sky system, this earthquake is a replica of August last year that caused thousands of deaths. Today, what caused this disaster is the terror product of an incessant wave of earthquakes that hit the island year after year.

Sylvera Guillame, director of the civil protection agency for Haiti’s southern region, told The Associated Press that local schools have closed and sent children home as a precaution. “People are too afraid to go home”, recounted Yves Bossé, an elected official in the Nippes department.

In Anse-a-Veau, a small seaside town 130 kilometers west of the capital, Prince Port, a man died when a wall collapsed. For its part, in Fond-des-Negres, 20 kilometers further south, the second death was caused by a landslide.

Widespread fear resurfaces especially after the earthquake last year. That 7.2 magnitude earthquake shook Haiti in August 2021, killing more than 2,200 people and destroying or damaging some 137,500 homes. Coincidentally, this earthquake occurred around 8:30 in the morning, just like the one from today, and the one from 2010.

At the time, the prime minister, Ariel Henry, described the situation as “dramatic”, with serious material damage, and decreed the state of emergency for a month. “We are going to take the necessary steps to assist those affected by the earthquake,” he tweeted in the middle of last year.

The watershed of tragedies began on January 12, 2010 with a magnitude 7 earthquake on the Richter scale left Haiti’s capital under rubble, with a balance of 300,000 dead. The infrastructure of the central government and local governments was completely collapsed.

It is difficult to forget that January 12. “I woke up and I didn’t even have time to put my shoes on. We lived through the 2010 earthquake and the only thing I could do was run. Then I remembered that my two children and my mother were still inside. My neighbor went and told them to get out. We ran into the street,” Naomi Werneus, a resident of Port-au-Prince, told the BBC world.

“I saw bodies being pulled out of the rubble, injuries and maybe people killed”Jean Marie Simon, a 39-year-old resident of Les Cayes, told Reuters.

The accumulation of deaths from earthquakes has been impregnated in the lives of Haitians who suffer from disasters that make them increasingly vulnerable. But not only are people, structures and buildings, which have been consecutively resisting earthquakes, they are increasingly sensitive. And it is that the small state has not managed to recover from any of the three earthquakes, each one contributes to a precariousness that seems to settle definitively.

“The real problem was not a fault that moved laterally and will certainly continue to do so in the coming months and years. The catastrophe is the two million people who roam the squares and streets and who live in overcrowded, precarious spaces, with few means of protection against the elements,” Luis Rolando Durán Vargas, risk specialist at the World Bank, said last year.