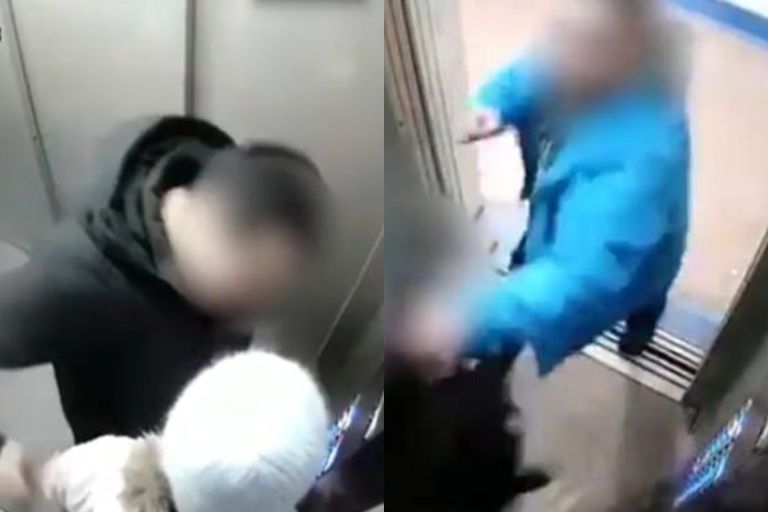 
A video captured the moment when a father ferociously beats a man discovering that he was stalking his daughter in the building where they live.

The scene happened two weeks ago inside an elevator in the city of Surgut, Russia. The video went viral on social media and The reactions Given what happened, they did not take long to arrive.

The incident occurred around 10:15 p.m. on January 2. The clip shows the 27 year old man staring at the young woman in the elevator before talking to her and leaning in for a kiss.

The teenager, on the other hand, she was noticeably uncomfortable about the situation and tried to walk away despite the tiny space they were in.

After a struggle that lasted a few seconds, the young he managed to push the man away and hurried away. Once he reached the floor of his apartment, the father fortunately appeared on the scene and immediately realized the situation.

Thus, he began to brutally beat the suspect in the face, and then drag him out of the elevator by the neck.

According to the local police, the suspect was arrested on January 3. Meanwhile, the authorities opened an investigation case against the subject and consider sentencing him for rape of a minor.

Similar cases of abuse have occurred in Russia over the past year. One of them was that of a man who stabbed to death his friend after discovering that had sexually abused his eight-year-old daughter repeatedly.

It happened in the Samara region, Russia, where the murderer was arrested days later after the discovery of the body. The event generated a strong social and political debate where the majority of the voices were expressed in favor of the release and dismissal of the accused.

According to international media, it all started when Vyacheslav M, 34, was in a bar with his friend two years younger, Oleg Sviridov, who was also the godfather of his daughter. In this context, he discovered cell multiple man images in which he was seen abusing the little girl and other children from the village of Vintai, where they lived.

Vyacheslav found that the sexual assaults on his daughter had occurred in the numerous occasions in which he had left her in the care of his friend and decided to confront him. But nevertheless, Sviridov escaped of the place. Given this situation, the man made the complaint to the Police and began a search by his own means. Shortly after, he managed to locate his friend and stabbed him to death.

After that the man was arrested and the situation created a strong rejection by the locals and some political leaders, who demanded his release. In a climate of great tension, Vyacheslav he was granted house arrest, while the Justice carries out the investigation of the case.