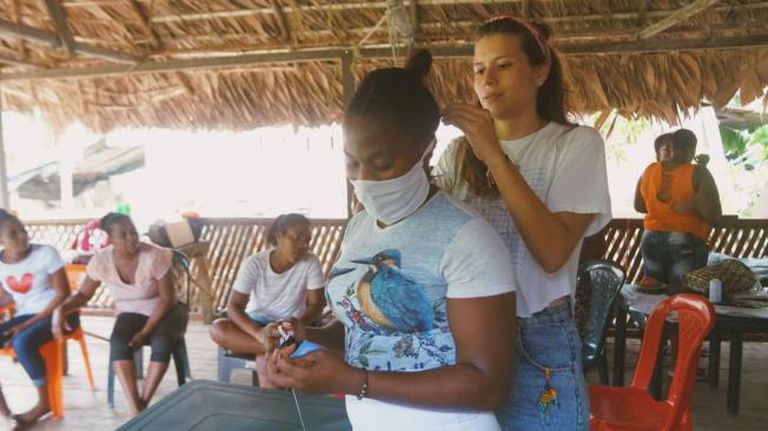 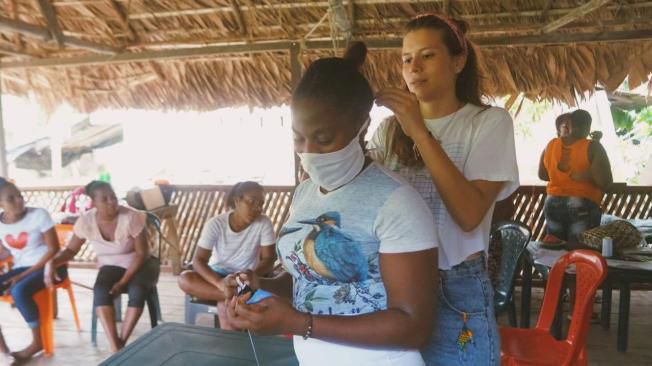 “The Country”. This is what the inhabitants of Coquí say to Alejandra Liévano, a district of Nuquí, Chocó, a Colombian Pacific municipality with no more than 8,300 inhabitants.

Alejandra arrived at the place six years ago to do a university project, when he was barely 19 years old, and from the moment he set foot in Nuquí “he felt the call of the earth”, he says. With her height of more than 1.70, her long brown hair, her white skin and brown eyes, she attracted the attention of the community, but she was not just another tourist who came to see the whales or enjoy the beaches. She traded her apartment, broadband Internet, her outings to eat with friends at a restaurant for daily sunrise in a hidden paradise in the Colombian jungle and from there to work with the community. She was in the third semester of Fashion Design at a private university in Medellin when she decided to inspire the prints of the garments of her final work in the Colombian Pacific.

“I was struck by the amount of benefits that I found in the Pacific, but also everything that was missing, it is a contrast between a natural abundance, but also what is the scarcity of opportunities,” he says.

There he began to investigate more about Chocó and its people. “There I said: ‘I have to go’. In fact, when I presented the collection I couldn’t speak, I just cried, the juries didn’t understand what was happening and I didn’t know why I was crying either, but I felt a very deep call from the territory”, says Liévano.

I knew there was a connection that went beyond a college job, so on his next mid-year vacation he bought a ticket to go to Nuquí without knowing where he was going to arrive or what he was going to do. He had a return date in two weeks. In those two weeks, Alejandra’s life changed. He met María, a midwife from the municipality, who told him about the district where she lived, Coquí, which is located about 30 minutes by boat from the urban area of ​​Nuquí. This small hamlet is part of the eight districts of this municipality. Alejandra returned after three months, she came and went every time she had vacations at the university, but during his visits “he experienced a very deep feeling, from the root”. “When I arrived in Coquí I knew that I didn’t want to leave, that I wanted to live in this place, that was going to be my goal,” he says.

During his vacation stays he took advantage and taught arts classes at the Nuquí school and she sold postcards in an exchange that caught her attention: “I exchange art for love, and with what I sold to tourists I could buy materials for the children’s classes and gave weaving classes to the women,” she says. The suitcase that Alejandra carried with clothes was left all in Nuquí and instead she filled it with rice and panelitas produced by the Nuquiseños, and she sold them in the city and sent them the money collected.

Alejandra graduated in 2018 at the age of 21 and decided to go to other rural communities in Colombia looking for her place. “I traveled from La Guajira to the Amazon and definitely confirmed that this (Nuquí) was the place where I wanted to be,” he says.

She had a brand of bathing suits that sold very well. in the city, he had an apartment in the capital of Antioquia; her friends, her whole life was there, and her family who lives in Bucaramanga, the city where she was born and raised. He sold everything he had in the apartment and packed his life in two suitcases with which he arrived in Coquí to stay permanently. ”I had no idea what I was going to do in this district of 120 inhabitants where they live from tourism, fishing and agriculture. People told me like: what is this girl from Santander doing here, as they told me very out of context, ”says Alejandra with a laugh. From that moment they call her the Paisa, although she is from Santander, that is how she was ‘baptized’ by the inhabitants of the town. For Alejandra’s family and friends it was not easy to understand that she was going to live in the jungle, “They told me why, being able to be anywhere in the world, I would go here, it wasn’t even easy for me, but I knew that I had a mission, which is to promote all the knowledge of the territory, to give visibility, that people fall in love because we don’t know what a treasure we have in the Pacific, a very vulnerable territory,” he explains.

But it was not easy, Alejandra found herself with an abysmal change in cultural material and comforts. He went from living in a capital to living in a town with 120 inhabitants in the middle of the Colombian rain forest. “It’s a giant culture shock. There is no time here, everything works depending on the tide, whether it is high or low tide. The rhythms of the territory move according to that tide. It rains every other day,” says Alejandra. She came to live in a small room that had the only store in town, where she worked at first while she remodeled her house. He ran the grocery store in town and with that he survived. Looking at the ceiling and finding a giant boa or walking jumping the snakes that were on the way became everyday for her.

”Understanding the context was my first task. Here you don’t live but you survive. The first months were very difficult, there was no cell phone signal, I couldn’t communicate with my family and they were very worried because we talked a lot once a week, now there is satellite internet and it’s another story, “he explains. But for Alejandra, there are more positive aspects of living in the jungle than negative ones. ”Arriving here was to grow physically and spiritually, I was able to build a family of 120 people. I live in love with the landscape, the people, the warmth, they have received me with open arms and I thank them every day”.

The keys of the Paisa to survive in the jungle are based on improvisation and adaptability, “I live much happier here than if I had all the comforts of the city, but you have to live improvising in order to adapt, I am the queen of improvisation,” she says with a laugh. Alejandra has stayed in place by running the store, being an online freelance designer and teaching workshops at school. These works have allowed him to build his house with his own hands in Coquí. “There are periods of economic abundance as there are times when there is not, but I have never lacked for anything because when I don’t have anything to eat, a neighbor always shows up with a banana,” he says. The only time Alejandra was outside the community for a long period was the product of leishmaniasis, which is a parasitic disease caused by a mosquito bite infected when he was harvesting cane. He had to go to his parents’ house in Bucaramanga for three months due to a wound that did not heal since in Coquí they do not have a space to care for patients. ”When I was there, many times my mother and grandmother told me not to return, to stay working there; but it is not negotiable, this is the path that I want”, comments Alejandra.

The 120 inhabitants of Coquí became her family and she felt the need to help them and together with her best friend, Camila Curiel, they began to work on materializing a proposal where value the ancestral craft because the value of handicrafts, medicinal plants, agriculture and gastronomy are still well preserved there. Thus was born the Casa Mucura Foundation, a project in which the women of the town are linked, who have been taught to weave and transform the products that are grown in the region so that they can be sold in the cities.

Right now they have two projects assets with Casa Múcura. One is the Nuquí Knowledge Center, which consists of a museum built in an abandoned house where there are five exhibition halls of medicinal plants, handicrafts, agriculture, gastronomy and fishing that can be visited by tourists. The families of the place rotate the administration of the museum every week and thus they can have income from the guided tours. But there are not only the five rooms, there is also a ‘living classroom’ that has become a space where the locals give classes in crafts, cooking, and medicinal baths.

However, the pandemic stopped the arrival of tourists and with it came a new project for the foundation, gulf seamstress. “Here, shipments of donations of disposable face masks arrived and arrived that were going to end up in the sea. So with five women they began to weave face masks by hand,” she says. Alejandra called the mayor and suggested that he buy the masks that they were weaving and they bought 3,000. This figure made Alejandra go from corregimiento to corregimiento to recruit women. “I walked the villages teaching how to weave by hand so that the women who wanted to have a job during the pandemic. We recruited 120 women who joined this work,” she says. This is how El Costurero del Golfo was born, for which they have received donations of industrial machines from friends and designers “who have fallen in love with the project and we have already completed 10,000 masks,” says Alejandra. After this, they got a contract to make disposable diapers, and today this has become a mission to mitigate the use of plastic in the territory.

This is how the Paisa has earned a place in the hearts of Coquiseños, is one of this large family of 120 people, who alternates with her family in Bucaramanga, where she travels at least once a year