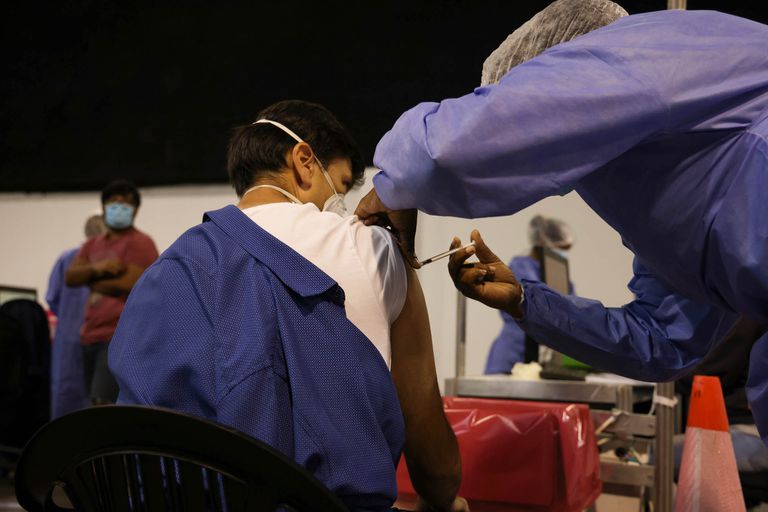 Reinfections: how long after having Covid can we get it again While the omicron variant is being deployed at full speed throughout the territory – a few days ago the barrier of 100,000 cases was crossed in 24 hours – many Argentines have learned in recent weeks that they have been infected with coronavirus. One more time.

The Covid-19 reinfections are expected even if you have the complete vaccination schedulesay the specialists.

“You make antibodies against certain antigens. But by varying these antigens (the omicron variant made many changes due to mutations that make it difficult for the body to recognize it), two doses of the vaccine are no longer enough and it is possible that the vaccinated individual becomes infected again. And not to mention the one who has only one”, says Eduardo López, head of the Department of Medicine at the Ricardo Gutiérrez Children’s Hospital.

“That is why it is so important to apply the third doses. And definitely vaccinate the 5.5 million people who have been vaccinated with just one. One dose does not work for either the omicron variant or the delta variant,” he explains.

For the specialist those reinfected usually have mild illnesses and, when vaccinated, have a shorter period of transmission of the disease.

“I’m fed up,” says Rodrigo Irazábal, a 31-year-old from Buenos Aires who was stranded in Misiones after a positive coronavirus test. Exactly a year ago, last January, he had been infected for the first time. Then her body ached and she lost her taste for a week and her sense of smell for three months. Taking that out, you don’t see much difference between the first and second contagion. “I went through the two diseases very similarly. Only this time I got a fever,” he explains.

He already has his complete double vaccination schedule and was about to take the third dose when he became infected at the end of December. Now you have to wait three more months.

How long does the immunity that vaccines or having passed through the disease last? For Martín Hojman, infectious disease doctor at Rivadavia Hospital and coordinator of the Infectology Network of the City of Buenos Aires, there are still no very clear answers in this regard. “It was established that after the disease the possibility of recontagion in the first three months is very low.. On the other hand, the vaccines studied showed protection ranging from six months to one year. But in no case was cellular immunity measured, which is memory immunity and lasts much longer,” he explains.

The great culprit of the reinfected, specialists agree, is the omicron variant. The positive is that it hardly gives symptoms. “They are not sick: in the vast majority of cases they are carrying the virus and are asymptomatic. That is why we are hardly seeing disease or complications,” says Ricardo Teijeiro, an infectologist at the Pirovano Hospital and a member of the Argentine Society of Infectious Diseases (SADI). “Then there are some who are experiencing a mild condition with few symptoms for the second time with the new variant.”

Alejandro would wish that this were his luck. He had to isolate himself at his home in Palermo. He knew he had coronavirus back as soon as he felt a strong fever. “I was not surprised to be reinfected, despite the fact that I have two doses of Sinopharm, but the level of the symptom was: I had a fever for three days, so much so that they had to inject me with an analgesic to lower it,” explains the 30-year-old.

In March 2020, when he was infected for the first time, he had had exactly the same picture: a very high temperature for three days in a row, but no cough or runny nose, much less loss of smell. At that time, the first cases of coronavirus in the country were just beginning to be diagnosed and the medical management of the cases was very different. So much so that they didn’t even swab him, because he had no respiratory symptoms. Alejandro did not doubt it, but he confirmed that he had had Covid months later, when taking an antibody test.

“I knew that at some point he was going to touch me again,” says resigned Malena, who is 27 years old and lives in Belgrano. He speaks with a completely congested tone of voice from his home isolation. Six months ago, in July 2021, he contracted the coronavirus for the first time. “I had so much vomiting and upset that I ended up on duty treating my dehydration. I also had a fever and was very tired: my arms ached just from shampooing while taking a shower. And I lost the taste”, he explains.

Now she is infected as well as her boyfriend. They both had the same picture of fever —high fever— and runny nose. This time, Malena had two doses of Sinopharm. For her the symptoms of this infection were milder. But the isolation remains the same: they will not be able to leave their home until next Monday. There are a total of seven long days of strict confinement plus another three of special care, according to the latest health definition.