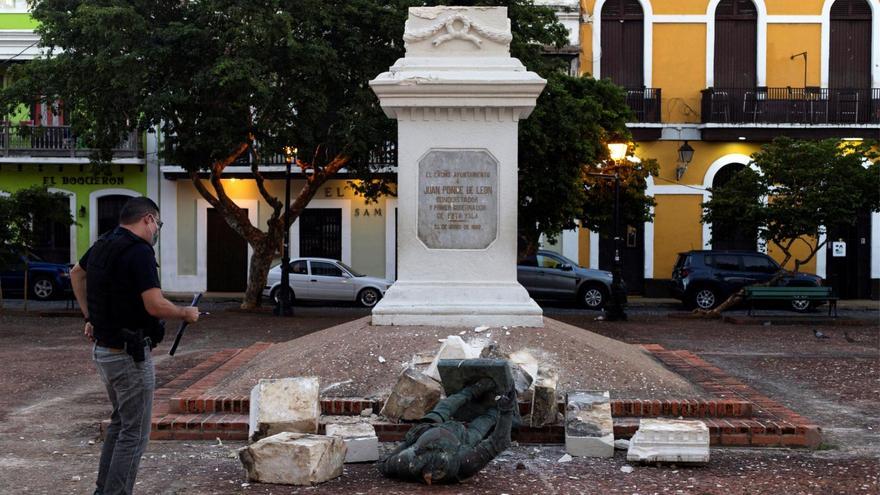 
The statue of the Valladolid Juan Ponce de León, the first governor of Puerto Rico, was collapsed this Monday in Old San Juan, the historic center of the Caribbean capital, which within a few hours rwill receive the arrival of the King of Spain, Felipe VI, to start a brief official visit to the island.

As Efe was able to verify, the statue of the spanish conqueror, Located in Plaza San José, one of the most central in the Puerto Rican capital, it was collapsed and fractured when it fell from the pedestal on which it was located.

The statue, consequence of the fall, was divided into trunk and legs, while part of the pedestal was also fractured into multiple pieces.

This act of vandalism was recorded a few hours before Felipe VI’s arrival in San Juan, who begins an official visit to Puerto Rico this Monday with which he seeks to strengthen bilateral trade and support the legacy of centuries of Spanish presence on the island on the occasion of the 500th anniversary of the founding of the capital.

The police investigate the facts

The San Juan Municipal Police investigate the facts and try to find out who is responsible for the damage to the statue, caused during hours this morning.

The mayor of San Juan, Miguel Romero, lamented the event and said that investigation is underway, which will include the analysis of the cameras near the place in order to identify those responsible.

He said that the first consequences of the act of vandalism will be having to allocate funds to fix it, which will come from the citizens’ taxes. “Now we have to invest public funds to fix that, to make a new sculpture,” he said in statements to local media.

He stressed that it is “product of some bandit”, in addition to ensuring that he does not understand what is the message that the authors of the act of vandalism want to convey.

The mayor of San Juan assured that the collapse of the statue will not affect the visit of Felipe VI. “Maybe the king doesn’t even realize that kind of thing,” he said, after indicating that the “visit is going to be good.” The investigation is being carried out by the Property Division of the Criminal Investigation Corps (CIC) of San Juan.

Felipe VI begins a brief official visit to the island with an agenda that includes a reception at the Casa de España in Old San Juan, near where the collapsed statue is located. The King of Spain makes this visit to the island in response to the invitation of the mayor of San Juan, founded by the Spanish in 1521.

The monarch travels to the island with a view to strengthening cultural ties, but, especially, to balance a trade balance that is very favorable to this Free Associated State with the United States. Juan Ponce de León, born in Santervás de Campos (Valladolid) in April 1460, was the first ruler of Puerto Rico and discoverer of Florida, now the United States. The acts of hostility towards statues of Spanish conquerors scattered throughout the territory of U.S they had not arrived in Puerto Rico, a Commonwealth of the United States.