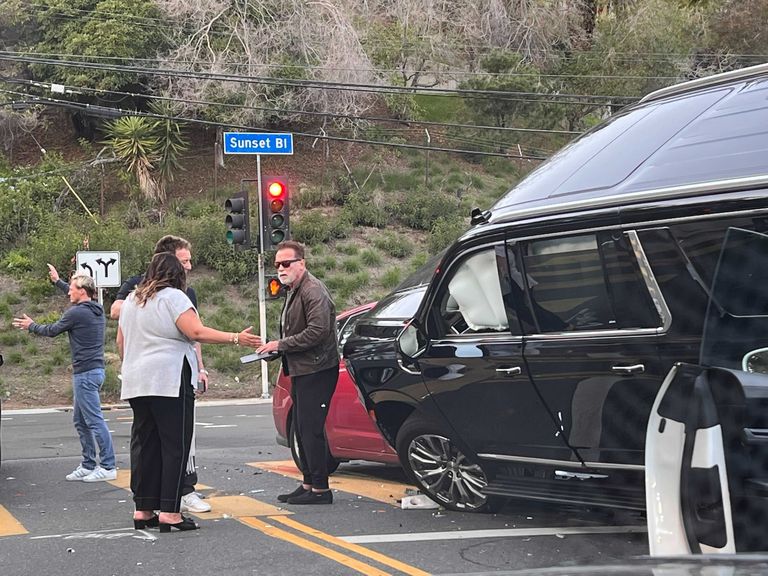 
This weekend, Arnold Schwarzenegger suffered an accident in the Brentwood neighborhood of Los Angeles, California, and although he was uninjured, the woman driving the other vehicle was seriously injured. According to international media reports, the multiple incident was caused by a mistake made by the protagonist of Terminator at a traffic light

At the moment the actor was not fined, and police sources found no indication that Schwarzenegger was under the influence of any substance. “He is fine, his only concern right now is for the woman who was injured.”, maintained his representative hours after the accident.

Meanwhile, as it turned out, the victim was rushed to hospital with a head injury; those who witnessed the event assured that the woman had abundant bleeding in her head. In addition, the sources that were on the scene revealed that the actor never moved from the scene of the accident. In fact, they maintained that he stood by the traffic light and was later seen talking to authorities and witnesses to the incident.

According TMZ, the multiple accident began when Arnold’s GMC Yukon hit another vehicle, a red Prius, and after hitting it, continued to turn and ended up colliding with a third, a Porsche Cayenne. The incident occurred at the intersection of Sunset Boulevard and Allenford Avenue, about two kilometers from the actor’s home.

In the images that circulated of the accident, the actor’s imposing car can be seen on top of the third vehicle, which was completely crushed.

According to police sources, the accident had the actor as the protagonist, since he turned left while the traffic light was still red. According to the aforementioned media, the witnesses assured that It was a very strong impact.

The accident comes at a bittersweet moment in the actor’s life. On the one hand, she is having a great time with her son Joseph Baena, the result of an extramarital affair with his housekeeper. They have been seen publicly together which fueled the rumor that they are finally patching things up. On the other hand, her divorce from Maria Shriver.

The actor and his ex-wife have been separated for almost a decade, after the story of the infidelity committed by the protagonist of Predator. Shriver and the Austrian-born performer were married in 1986 and did not have a prenuptial agreement. They were together for 25 years and had four children: Katherine, Christina, Patrick and Christopher.

Schwarzenegger today has a busy heart: he is in a relationship with physical therapist Heather Milligan, almost 30 years younger than him. Milligan hasn’t separated from the actor since 2013. The couple were first seen together a year after photographers caught them kissing on the streets of Santa Monica. In 2014, Milligan accompanied Schwazenegger to the Oktoberfest party in Germany, thus making the courtship official, which remains stable to this day.