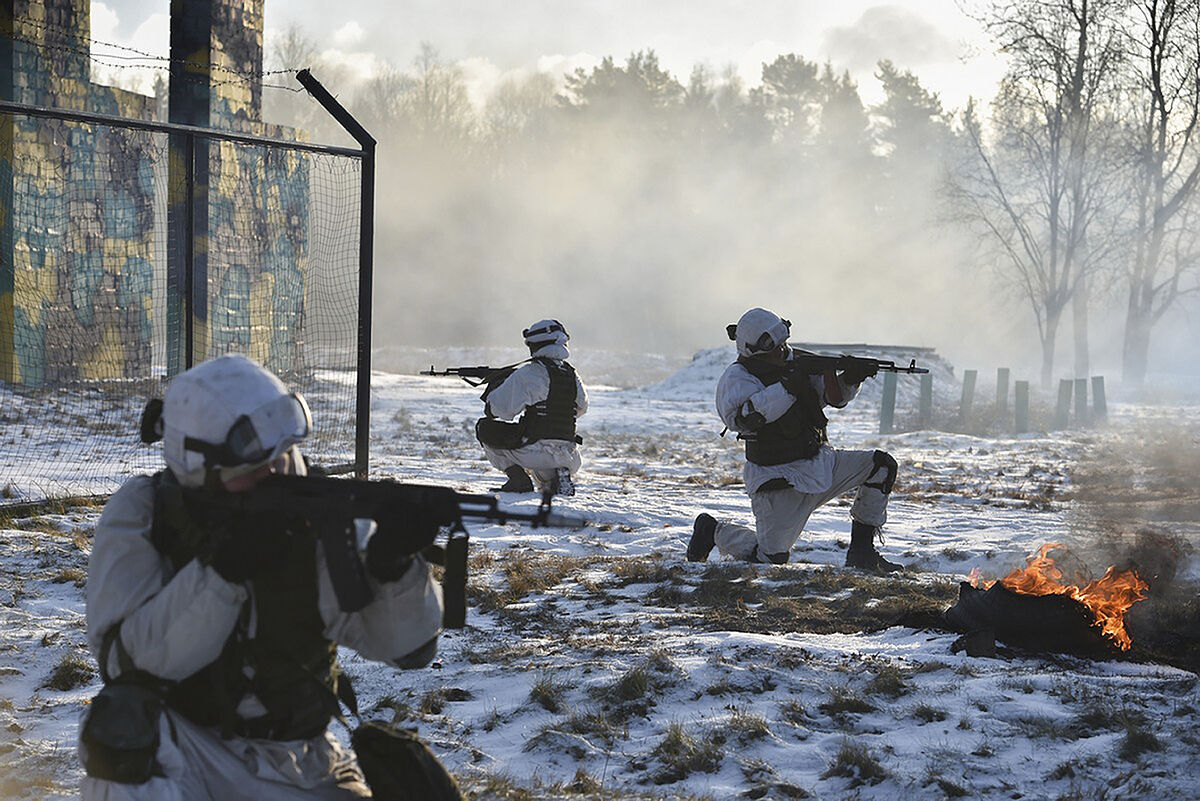 Biden and Putin prepare their soldiers next to the Ukrainian powder

6,000 soldiers, fighter planes and bombers of the Russian Army New maneuvers began on Tuesday near Ukraine and in annexed Crimea as Moscow increases pressure on the West with its security demands. Russia demands to veto Ukraine and Georgia. And that NATO cease its military cooperation with the former Soviet republics. They even call for the withdrawal of NATO troops and missiles to the positions they occupied before 1997. “There is nothing new,” Kremlin spokesman Dimitri Peskov stressed on Tuesday.

The new maneuvers that startled Kiev yesterday are a “joint” operation in which they participate especially “the air and anti-air force, groups of ships of the Black Sea and Caspian fleets“, said the commander of the Russian forces for the south of Russia, Alexander Dvornikov.

Hours before launching these war ‘games’ along the Ukrainian border, Russia had expressed their concern about the US decision to put these 8,500 soldiers on “alert” before an eventual deployment in Eastern Europe. From the Kremlin they spoke of a new “exacerbation of tensions” by Washington.

It has not been disclosed to which countries US troops could be sent. Washington indicated that they could be sent to Eastern Europe. Possible destinations include Poland, Romania, Bulgaria or Hungary. The New York Times reported that the Baltic countries are also candidates.

Mosc is also worried for how Ukraine does not stop arming itself. A US plane carrying military equipment and ammunition landed in Kiev on Tuesday to deliver the third shipment of the so-called “security package” (worth 200 million dollars) to shore up Ukraine’s resistance to a possible Russian military offensive. Since 2014, the US has provided more than $2.5 billion in military aid: including Javelin anti-tank missiles and patrol boats, humvee military vehicles, sniper rifles, reconnaissance drones, radar systems, night vision and radio equipment.

In Moscow, they are still waiting for the US response to the Russian demands, which should arrive this time in writing. The day before yesterday a Russian ambassador warned in Vienna that if the West did not give in, North Americans and Europeans they will suffer the consequences “on their necks”.

“At their current stage, the negotiations have concluded. Before knowing how we are going to continue, we must receive the text [de las respuestas], which we expect this week,” Peskov told reporters.

During a meeting with journalists, the Kremlin spokesman was asked if in the recent telephone conversation between the Russian president, Vladimir Putin, and his Cuban counterpart, Miguel Díaz-Canel, they had spoken of the possibility of placing Russian military infrastructure in Cuba. Peskov answered no. A few days ago members of his government were open to paying the US with their own currency and placing missiles near US borders.

The negotiations can enter a dead end if the president of the USA, Joe Biden, does not adequately respond to the request for security guarantees demanded by Russia.

Surprised by the personal or family evacuations from some embassies (such as the US or Canada) and concerned about the troops that Russia accumulates on the other side of its border, Ukraine appealed to the UN and the EU. They beg to stop the “Russian threat of invasion”

From Kiev they ask to avoid the blackmail of Moscow and the threats. The Ukrainian Parliament has issued a resolution asking the United Nations and the European Union to stop Moscow’s actions. Ukrainian deputies say that go against its “territorial and sovereign integrity”. They demand respect for the “principles and norms recognized by International Law.”

The Kremlin denies that it will invade Ukraine but has refused to comment on Moscow’s possible responses to a US and NATO denial of its demands.

The Parliament has urged to strengthen the defense capabilities of Ukraine, the development of its Armed Forces in accordance with NATO standards. They also ask to recognize their European perspective and determine specific timeframes and modalities for “greater integration” into NATO. In this sense, he has also asked to strengthen the sanctions until Moscow “completely stops its armed aggression and restores the sovereignty and territorial integrity of Ukraine within its internationally recognized state borders,” according to Efe.