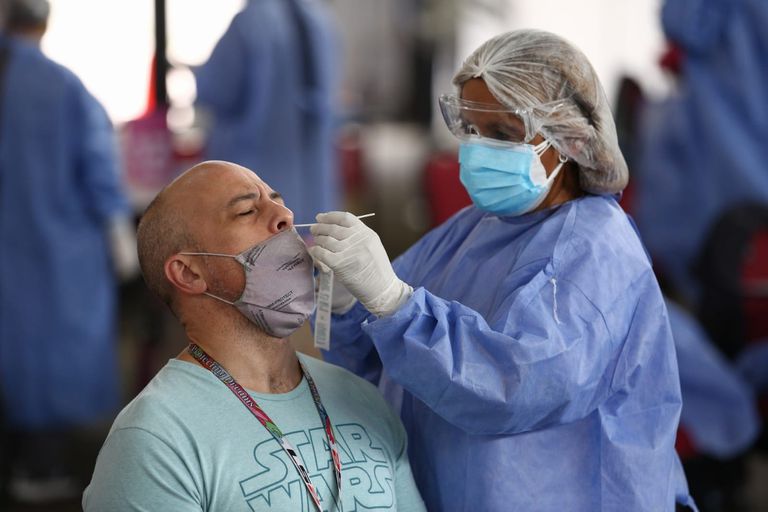 692 days after the first positive case of Covid-19 coronavirus was confirmed in Argentina, on March 3, 2020, the country today exceeded 8 million infected, after more than 100,000 new infections were reported in the last 24 hours. This places Argentina as the 11th country in the world with the most reported cases. And it is the second in the region behind Brazil.

Specifically, the government reported this Tuesday 100,863 new Covid infections, which raised the count national to 8,041,520. of that number, 7,084,885 have already overcome the disease people and 836,932 patients are active cases.

Meanwhile, the health centers in the provinces and the city of Buenos Aires reported 260 deaths, with what the death toll rises to 119,703.

The provinces that reported infections were:

Among the dead admitted to the National Health Surveillance System (SNVS), one person residing in Buenos Aires and another in Río Negro did not present gender data, the rest, 143 were men who lived in:

What’s more, it was reported that 158,767 tests were processed yesterday. Since the beginning of the outbreak, 31,979,973 tests diagnoses for this disease.

On the other hand, Until yesterday, 2,640 people had the disease in Intensive Care Units (ICU). Therapy beds are 48.7% occupied nationally. In the Metropolitan Area of ​​Buenos Aires (AMBA) that number reaches 47.7%.

The Minister of Health, Carla Vizzotti, said today that it is not yet known when the coronavirus infection curve produced by the omicron variant will drop., but expressed confidence that “next March there will be more tranquility” in terms of the number of cases.

“We still do not know when the contagion curve produced by the omicron variant will go down, said the official, although she estimated that “we will have more peace of mind for March.”

In statements to futurockVizzotti added: “We are coping with a wave that has reached 150,000 cases with a lower number of deaths. We hope the descent will be faster and we have another epidemiological situation.”

The Health Minister highlighted also that “the vaccination coverage we have is very encouraging”, since “90% of those older than 3 years began the scheme and 78% completed it”.

On the 150th session of the Executive Council of the World Health Organization (WHO), in which he participated yesterday, considered that “the great powers expressed the need for equitable distribution” of vaccines, although he recalled that “First they stocked up with more vaccines than their own population.”

In his speech in Geneva, Vizzotti warned that “Until all countries have access to the vaccine, we will not turn the page” on the coronavirus pandemic and recalled that “it is not the first time that there is inequity in the distribution” of vaccines and treatments.

“The great powers monopolized the production of 80% of the vaccines. Only when they had leftovers and were close to expiration did they begin to donate”, criticized the official.

In addition, the head of the national health portfolio recalled that the Sputnik and CanSino vaccines that are applied in our country are in the process of being approved by the WHO, and that for these drugs “to enter the emergency list, documents and information have to be presented, something that takes more time for Russia and China because they have different circuits.”

Regarding the distribution of vaccines in Argentina, he stated that they are “regulating the arrival of new doses to play with the stock and the expiration date” in order to have “available vaccines with enough shelf life to distribute in the provinces”.