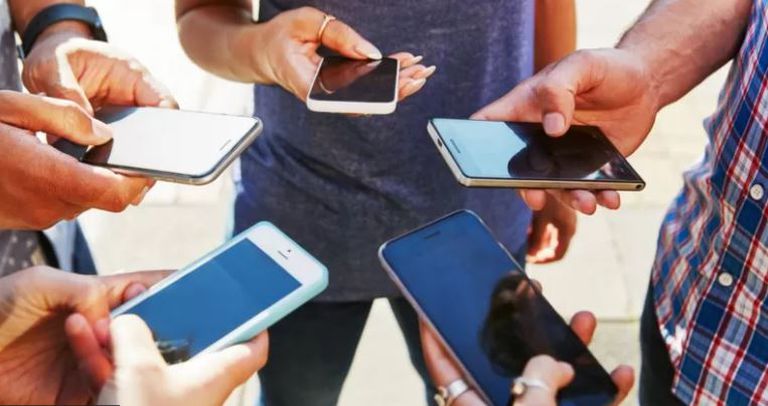 How people who decide to get rid of their smartphone live


In a world where many of us live glued to our smartphones, Dulcie Cowling is a rare breed: she’s gotten rid of hers.

This 36-year-old woman decided at the end of last year that put aside your smartphone It would improve your mental health. At Christmas, he told his family and friends that he was going to trade it in for an old Nokia with which he could only make and receive calls and text messages.

She remembers that one of the crucial moments that led her to make such a decision was a day in the park with her two children, aged three and six. “I was in the park, with the children, staring at my mobile. When I looked up, all the parents – up to 20 – were looking at their phones, continually sliding their fingers across the screen, “he says.

“’When did this happen to us?’ I thought. We’re missing real life. I don’t think on your deathbed you’ll regret not spending more time on Twitter or reading articles on the internet.”

Cowling, who is the creative director of Hell Yeah!, a London-based advertising agency, adds that the idea of ​​abandoning his smartphone developed as the lockdowns progressed due to the Covid-19 pandemic.

“I thought of how much time of my life i spend looking at the phone and what else could i do. Being constantly connected to many services creates many distractions and it’s a lot for the brain to process,” he added. For these reasons, his plan is to use the time gained from putting down his smartphone to read and sleep more.

About nine out of ten people in the UK own a smartphone, a figure widely replicated throughout the developed world. And we’re glued to them: A recent study found that the average person spends four to eight hours a day on their phone.

However, for a small but growing number of people, it has already been more than enough.

Alex Dunedin threw his smartphone in the trash two years ago. “Culturally we have become addicted to these tools,” says this educational researcher and technology expert. And he thinks: “They are weakening cognition and impeding productivity”.

Dunedin admits that he is happier and more productive since he stopped using his smartphone. He hasn’t replaced it with an old cell phone and he doesn’t even have a landline. He can only be contacted through emails that arrive on his home computer.

“My life has improved,” he says. “I have freed my thoughts from being constantly cognitively connected to a machine that I need to feed energy and money. I think that the danger of technologies is that they are draining our lives”.

Lynne Voyce, a 53-year-old teacher and writer from Birmingham, central England, moved in the opposite direction: She started using a smartphone again last August, after a six-year break.

She says she was forced to buy one reluctantly due to having to deal with QR codes in restaurants and so-called (digital) Covid passports, in addition to facilitating contact with one of his daughters who lives in Paris.

But, plan to quit again if you can. “After the pandemic, and when Ella [su hija mayor] you are not living abroad, you could try to leave it again. Sounds like an addiction, doesn’t it?

When Voyce first ditched his smartphone, in 2016, it was to encourage their daughters to reduce the time they spend engrossed in their smartphones. “They were glued to their cell phones. I thought the only way to stop it was to get rid of my own.” And it made the difference. “For example, we would arrive at a restaurant and they would no longer see me pick up the phone,” he recalls.

Not having a smartphone “It took a lot of pressure off me.“, He says. “I no longer felt like I had to respond instantly or be available when I was away.”

However, while some worry about how much time they spend on their phone, for millions of people it is a gift from heaven. “More than ever, access to health care, education, social services, and often our friends and family, is digital. The smartphone is an essential lifeline for people,” says a spokesperson for the Vodafone mobile network in the UK.

“We also create resources to help people get the most out of their technology, as well as stay safe online. This is very important”.

Hilda Burke, psychotherapist and author of The Phone Addiction Workbook (“The Telephone Addiction Handbook”), says that there is a strong link between heavy device use and relationship problems, sleep quality, our ability to disconnect and relax, as well as concentration levels.

“Many people get a constant trickle of requests coming through their device, many with a false sense of urgency“, Explain. And he maintains: “They feel unable to set limits, with the result that they feel compelled to check their emails and messages late at night and first thing in the morning”.

If getting rid of your smartphone sounds like too much, but you’re worried about spending too much time on it, there are other steps you can take to reduce your use. Although it may seem contradictory at first, there are more and more applications to reduce meaningless browsing for them. For example, Freedom it allows you temporarily block apps and websites so you can focus more. Y Off The Grid enables you lock the phone for a certain time.

Burke says it would be helpful if more people kept an eye on how much time they spend on their smartphone. “Begin to realize exactly how much time they waste each day on your phone can be a powerful wake-up call and a catalyst for change.” He also recommends starting by turning off your phone or leaving it at home for a short time, gradually lengthening the time.

Finally, it is advisable to set the cell phone wallpaper a picture or word that represents what you would rather do if you had more time “Considering that most of us check our phones 55 times a day and some of us even 100 times, this is a great visual reminder of a more valuable way to pass the time.”