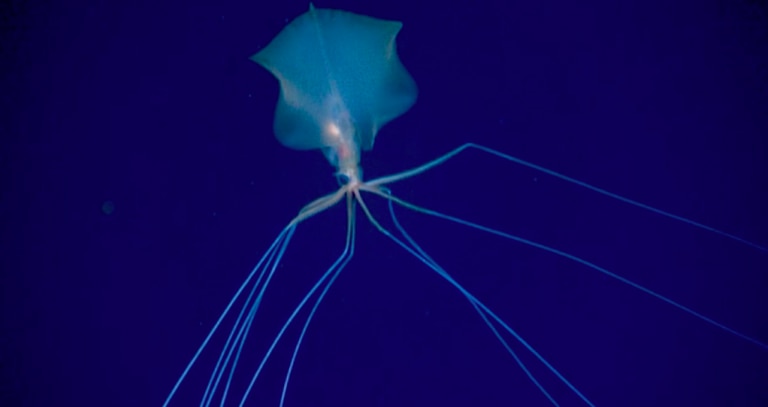 Impressive: a rare species of giant squid was spotted at a depth of 6,000 meters in the Pacific


In 2021, more specifically in the month of April, a group of marine explorers made history by making the deepest dive in search of a shipwreck. The mission, supported by the Caladan Oceanic organization, aimed to find a ship sunk during World War II. The project was not only a success because they found the remains they were looking for but, a year later, they made the news again in this case for report an encounter with something even more surprising.

In 1944, the Leyte Gulf was the scene of one of the fiercest battles of World War II. The United States wanted to invade the Philippine Islands, and when Japan tried to intervene, it deployed all its military force. The countries became involved in a harsh maritime confrontation that ended with the victory of the North Americans and a large number of casualties for both nations. Among all the vessels that succumbed was the destroyer USS Johnston. The sinking of it had a striking appearance because of the area where it occurred.

The shipwreck happened in the vicinity of the island of Samar, very close to a sea canyon known as the Philippine Trench. In this way, the USS Johnston ended up in one of the deepest areas of the geographical feature. After a long preparation, the explorers found him. Days before making the historic discovery, they had tried to descend but without success. Or so they thought since, years later, they saw something incredible in the recordings of that day.

Alan Jamieson, a deep-sea researcher at the University of Western Australia, analyzed the video frame by frame to see if they had missed something. And indeed, at a very distant point he could detect a small speck moving across the screen. The discovery consisted of a couple of seconds of footage that looked very blurry but the expert, to remove any doubts, sent the material to Mike Vecchione, a zoologist at the Smithsonian Institution.

His colleague confirmed the suspicions: it was an individual belonging to the magnapinid family (Magnapinnidae). That is to say, it was a giant squid. According to National Geogrpahic, these animals “are characterized by having eight arms and two thin tentacles with an irregular distribution. Its limbs can reach up to twenty times the size of the rest of its body, with a maximum reported length of 6.4 meters long. According to various studies, they established that it was a very young specimen.

The sighting of the squid caused a stir in the scientific community as It took place at 6,212 meters below sea level, a depth that had never been recorded for this species. Likewise, the approaches with this type of animal are very strange and infrequent.

According to the National Oceanic and Atmospheric Administration (NOAA), in history there were only 12 encounters between giant squid and motorized exploration vehicles. The most recent occurred in the United States during November 2021 when NOAA’s Windows to the Deep 2021 expedition found one in the Gulf of Mexico.