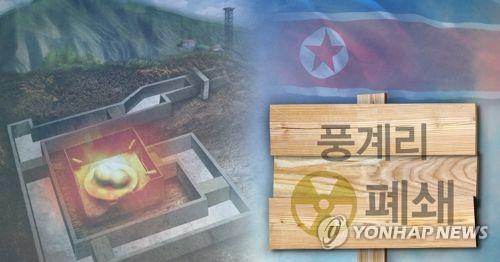 The official’s assessment came after Olli Heinonen, former deputy director general of the International Atomic Energy Agency, told the Voice of America (VOA) earlier this week that the North is holding the site as evidenced by “traces”. of automobiles and snow removal.”

In May 2018, North Korea claimed to have demolished the site in a show of willingness to denuclearize. The following month, he pledged to work toward the “complete denuclearization” of the Korean peninsula at the first summit with the United States in Singapore.

“We have identified reported maintenance activities on part of the facilities there, but have not detected any signs of activities to restore the tunnels,” the official told reporters on condition of anonymity.

Commenting on the VOA report, the Joint Chiefs of Staff (JCS) said South Korean and US intelligence authorities are closely monitoring North Korean activities at the site.

“Since the closure of the nuclear test site at Punggye-ri, we have been paying close attention to related activities there,” a JCS official told reporters on condition of anonymity. “To date, there is no change worth mentioning.”

In the VOA report, Heinonen cited two possible reasons for the North’s activities to maintain the site, including to control any release of radioactivity from the site.

“The other function is that they will probably keep the site so that they make the decision at a later date to continue testing,” he said. “They could use some tunnels, which weren’t destroyed in 2018. So I think it has a dual purpose right now.”

The signs of activity at the Punggye-ri site came after Pyongyang issued an apparent threat to scrap its self-imposed moratorium on nuclear and long-range missile tests amid a prolonged deadlock in nuclear negotiations with Washington.