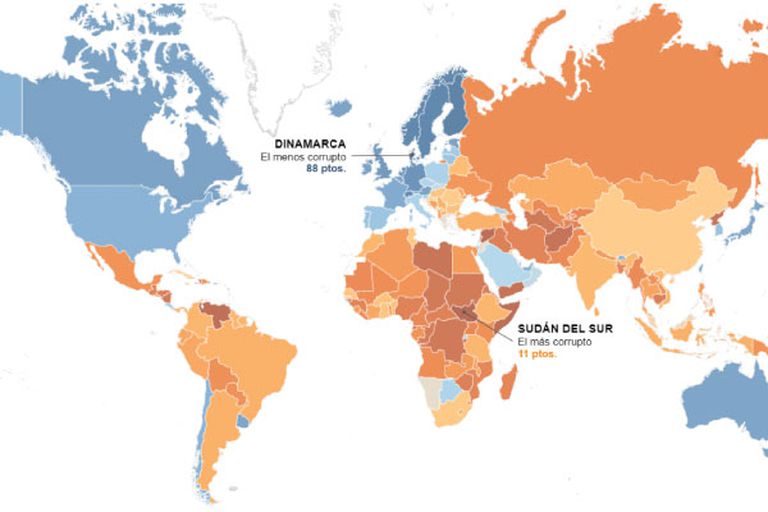 Strong setback of Argentina in a world anti-corruption ranking: the reasons


Argentina fell 18 boxes in the annual anti-corruption index carried out by the NGO Transparency International and was ranked 96th out of 180 countries. In 2020, he had already lost 12 places in the world ranking, which meant a relapse after having climbed in recent years.

The country he got 38 out of a possible 100 points and failed to exceed the average score of the world table: 43 points. Last year he had achieved 42 points and was ranked 78th.

The index, where the best score is 100 and the worst 0, ranks countries according to the level of perception of corruption in the public sector, constructed from data from 13 external sources: surveys and evaluations carried out by various institutions that include specialists in the field, entrepreneurs and consultants.

“The result for Argentina is bad and it is observed that there is a drop in the perception of those consulted about the level of corruption in the public sector in our country”, he stated. Pablo Secchi, executive director of Poder Ciudadano, Argentine chapter of International Transparency.

The president of Transparency International, Delia Ferreira Rubio, considered that there are several factors that explain the deterioration in terms of corruption in Argentina and listed: the situation of those accused of acts of corruption, the Government’s relationship with Justice and the lack of transparency in the purchase of vaccines against Covid-19.

“I would highlight the growing impunity enjoyed by those involved in acts of corruption and the Government’s repeated attempts to colonize the Judiciary, affecting the independence of judges. The seriousness of these attacks reaches the level of the Supreme Court of Justice. Without an independent judiciary, corruption increases,” the Argentine lawyer told THE NATION.

“Another factor that clearly influenced the perception of corruption is the lack of integrity of many public officials that reached scandalous levels with the “VIP vaccination center” and “Olivosgate”, clear examples of abuse of power for personal benefit and that of family and friends, exactly the definition of corruption. The lack of transparency that affected and affects the vaccine purchase contracts It is another aspect that contributes to the perception of corruption, affects the right of access to public information and makes it difficult to control the use of public resources,” he added.

2020, marked by the pandemic, meant a relapse for Argentina after the first year in the Casa Rosada de Alberto Fernandez. In 2019, during his last year, President Mauricio Macri obtained the best rating of his administration: he managed to climb to 66th place and got 45 points.

According to Delia Fernández’s vision, this leap from position 85 was driven by the judicial progress of the bribery notebooks case, revealed by THE NATION. The last big jump had been when Macri came to power and after Cristina Kirchner left the Government, in 2016: the perception of corruption in Argentina had dropped.

If a regional cut is made, Argentina is not among the best countries in America either: it is in position 18 out of 31 states, surpassed, among others, by Uruguay (2nd), Chile (3rd), Cuba (12th) and Columbia (15th). In the worst situation are Brazil (19th), Peru (22nd), Mexico (24th) and Venezuela, which occupies the last place.

As a global reading, the report highlights that the fight against corruption is stalled “in an environment of human rights abuses and deterioration of democracy.” 86% of the countries evaluated did not show any progress in the last ten years and 154 countries have suffered a deterioration or have not advanced substantially.

The world podium is headed by Denmark, Finland and New Zealand: all three achieved 88 points. The data agrees with the report Democracy Index where these three countries are also among the top ten rated. In contrast, the countries perceived as most corrupt were Somalia (13), Syria (13) and South Sudan (11).

With the collaboration of LA NACION Data.