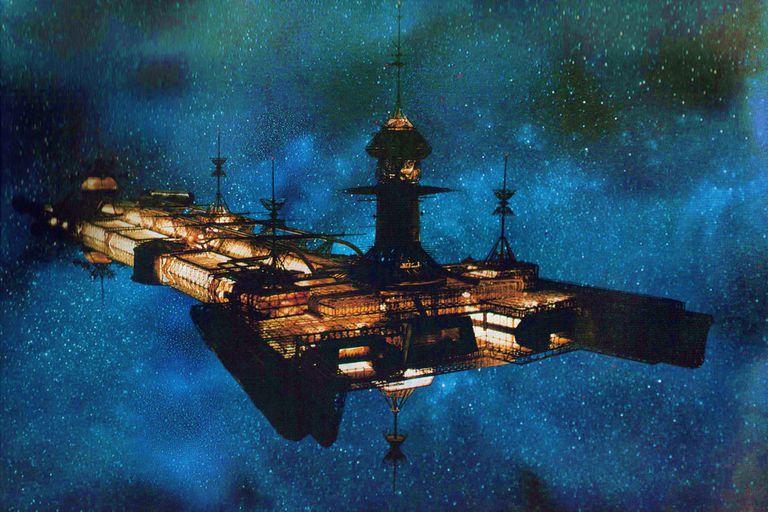 What I see? The black abyss: when Disney thought of competing with Star Wars for the reign of science fiction


There was a time when Disney wanted to go head-to-head with George Lucas. and go out to conquer the same public that filled the cinemas with the dazzling appearance of Star Wars. That happened in 1979, long before Mickey Mouse’s empire will revolutionize the market and pay 4 billion dollars to acquire Lucasfilm in 2012.

From that moment on, the Force has been with Disney, which does not cost anything to be at the forefront of all science fiction audiovisual stories. the universe of Star Wars It continues to multiply and finds a solid correspondence in other studio products (Marvel, without going any further). But in 1979 the reality was different in Hollywood, and the initial explosion caused two years earlier with the premiere of the first film of the saga stimulated the emergence of new ideas around that world.

Disney’s direct response to George Lucas at the time was called the black abyss (The Black Hole). Forgotten for a long time and now recovered thanks to streaming, 43 years after its release, this film It is one of the great rarities of the production of the Disney studios in the last half century. Seeing it now, with everything that happened afterwards, leaves the viewer with a sensation of curiosity and estrangement mixed together.

In today’s eyes, the film works as a model of what usually happens to us when we see a work of science fiction made a long time ago. Much of what seemed novel and surprising at the time, especially in the field of visual effects, is often viewed with a naive smile in retrospect. In this case, our eyes have become so accustomed in recent years to the perfection of digital effects that it is difficult for us to recover the impact of visual resources much closer to the physical and tangible experience such as those proposed The black abyss. But at the time, as will be seen, these visual resources were very attractive. They drew a lot of attention.

The similarities and parallels with the universe of Star Wars they are not the product of chance. In the black abyss there are life-size human figures moving behind armored metal uniforms that function as a strike force (similar to Stormtroopers, but with much more limited movement). You also fight from a distance between opponents who shoot deadly beams of light at each other. And a robot named Vincent (voiced by Roddy McDowall in the original version) who fulfills here a function quite similar to that of R2-D2 (the popular “Arturito”) in the George Lucas universe. Both have a visible family resemblance.

What changes is the story. And also the environment. Ron Miller, then president of Walt Disney Productions, became the great architect of this film. His first decision was to remove the traditional identifying sign of Walt Disney films from the opening credits. I wanted to do something else and I was very clear about it.

Over time, Miller would try other transformations with the aspiration of adapting Disney to a new moment in the industry and in the relationship between cinema and its audiences. always noted that the black abyss It was the first film in history to receive a PG (Parent Guidance) rating in the United States. Until then, no Disney production had received the warning that some themes or images could be inconvenient for children’s sensibilities and therefore required the guidance of parents or responsible adults. Another legacy of Miller, years later, was the creation of Touchstone Pictures, a division of Disney dedicated exclusively to producing films for adult audiences.

Miller was also Walt Disney’s son-in-law. He was married to Diane, the only biological daughter of the creator of Mickey Mouse. It had enough support to face innovative paths and leave behind the exclusivity of traditional formulas that left the studio behind in the face of the transformative impulse that appeared in Hollywood in the second half of the 70s, with the arrival of high-impact films and the beginning of the era of blockbusters, colossal box office successes that extended to other businesses such as the merchandising. Star Wars it was the biggest and most successful example of a trend that Disney at the time watched from afar.

It was precisely the immediate and colossal success of George Lucas’s first galactic adventures that led Miller to personally take on the production of The black abyss. With his team, he dusted off a science fiction project that had been unresolved for years, with several changes and rewrites. Only the starting point was left standing: a spaceship that was beginning to approach a black hole, a strange cosmic formation that seems to have the power to absorb all matter that approaches it, and even light. Carl Sagan was one of the greatest promoters of this idea, born from the studies, theories and research of Albert Einstein and Nathan Rosen. Science fiction, from there, imagined through black holes the possibility of traveling through space and time.

From that impulse emerged the narrative axis of the film. An exploratory ship discovers in the middle of space and very close to those fearsome black holes a strange phantom formation that seems to be drifting. It is actually the Cygnus ship, which for years was thought to be definitively lost, as well as the figure of its commander, a man named Hans Reichardt whom Maximilian Schell he brings all his eloquence and a powerful theatrical presence.

The ship approaching the Cygnus, named the USS Palomino, has a bare-bones crew: a commander (the vigorous Robert Forster, which years later would shine in Jackie Brown, by Quentin Tarantino), a first officer (Joseph Bottoms), Two scientists (Anthony Perkins e Yvette Mimieux) and a veteran journalist (Ernest Borgnine). The woman is the daughter of another space scientist who was traveling with Reichardt on the expedition that was reported missing.

Before that meeting in the middle of the cosmos, the film has a completely atypical start. Instead of the traditional Disney logo, as we said, everything begins with two minutes with a black screen while the overture composed and directed by John Barry, the extraordinary English musician creator of the sound that identifies the James Bond movies. The letters of the initial credits respond to the classic typography of the computers of that time. And the images of space begin to appear, which reach quite a bit of technical perfection, especially in the sense of three-dimensionality.

the black abyss It achieved an Oscar nomination for its visual effects, whose most outstanding feature was the intensive use of matte paints, a resource that is not lacking in almost any major Hollywood production. Before the large-scale use of this resource in its digital expression, matte paintings they had an almost handmade look. Through this technique it is possible to superimpose a series of images, videos and illustrations with the idea of ​​obtaining a visual representation of reality. The result of that combination in El abismo negro, expressed in landscapes and backgrounds, is remarkable. There are at least 150 such paintings in the film.

The other visual highlight of the film is how the lack of gravity is shown inside a spaceship. To achieve this effect, the actors moved with the help of invisible cables and harnesses, the use of which opened up an unexpected problem. The actress originally chosen to play the only woman in the cast was the beautiful Jennifer O’Neill, highly sought after at the time after its consecration appearance in Summer of ’42. But the character required him to part with his long, straight hair. Rather than seek out some artificial resource (a wig, for example), O’Neill underwent lengthy and laborious haircutting sessions, with the help of renowned hairstylist Vidal Sassoon. The experience was so traumatic for the actress that at the end of one of those days she suffered a quite serious car accident and had to leave the project.

His replacement was Yvette Mimieux, already known by the public of science fiction cinema for his participation in the best known version of The time Machine (1960), along with Rod Taylor. the memory of the black abyss grows these days from the memory of Mimieux, whose beauty had European and Latin features thanks to a French father and a Mexican mother, and her appearance in the film with curly hair. The actress passed away at the age of 80 on January 17.

the black abyss It had a demanding shoot (26 weeks in total), which was almost always kept secret to encourage the expectations aroused by an innovative project for Disney’s strategies. Its director, Gary Nelson, was a competent and experienced television producer (he was in charge of several episodes of Gilligan’s Island, super agent 86 and other classic series) and boasted a cast of trusted and prestigious names. The premiere did not go unnoticed and was able to recover at the box office the 20 million dollars invested in its production.

But in the medium term the results were not as expected. The first feature film star travel with the cast of the original series, which cost almost twice as much and was released almost at the same time, he immediately found the certainty of continuity. Meanwhile, nobody dared to say a word about the possibility of making the black abyss 2. Over time, many attributed the disinterest in a potential sequel to the film’s puzzling ending. Nelson himself, several decades later, would admit to The Hollywood Reporter that the story did not have a precise and convincing closure. The director and his team even traveled to Rome and managed, with the express authorization of the Vatican, to record images of the Sistine Chapel with a view to a possible ending that was finally ruled out. The chosen option, of great visual beauty, still fills specialists with confusion.

What Miller could not achieve with the black abyss arrived for Disney in 1982 with Tron, another futuristic fantasy that managed to make its plot known in popular conversation, established itself as a story with its own identity and even achieved continuity decades later. the black abyssInstead, it went down in history as a strange anomaly. A film imagined to fight hand in hand with Star Wars the domain of science fiction in cinema, but condemned to oblivion in the following years. Today, the creation of George Lucas has a dominant, large and own space on Disney +. the black abyssInstead, she sits in a corner of the platform, hoping that someone is willing to discover her.

the black abyss is available on Disney+