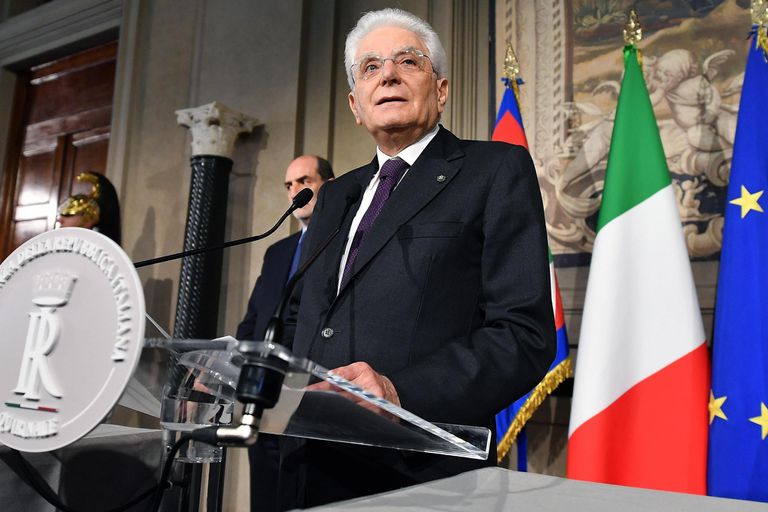 End of psychodrama in Italy: Sergio Mattarella was re-elected president


ROME.- And on the sixth day, there was light. After seven black smokes and incomprehensible chaos for a public opinion overwhelmed by the pandemic and other problems, finally the 1,009 major voters – senators, deputies and regional delegates – in the eighth vote that took place this afternoon reached the “ultima ratio” solution of “Mattarella bis”. That is to say, they re-elected the outgoing president, Sergio Mattarella, whose term expired on February 3.

Mattarella, 80 years old and who had made it known in recent months that he did not want a second term, for the good of the country and in view of the total deadlock in Parliament, fragmented as ever and unable to elect a high-profile figure to replace him since Monday, he finally agreed to sacrifice himself.

Very popular, loved and respected by Italians, Mattarella had been elected for the first time in February 2015 as Giorgio Napolitano’s successor. who, like him, had been forced to a second term that was not seven years, but two. And he was re-elected in a plebiscitary manner, by far exceeding the 505 necessary votes. When that moment arrived, after 20 local, a strong and long applause broke out in the hemicycle.

The only force that voted against him was the right-wing group Brothers of Italy, led by Giorgia Meloni, that does not support the national unity government of Mario Draghi and is in the opposition.

As had happened in the sixth ballot, yesterday, when it had received an avalanche of 336 votes, also in the seventh, in the morning, the momentum in favor of “Mattarella bis” continued to grow until it reached 387 votes, coming from the progressive forces and in the center.

While this scrutiny was taking place, which is secret and therefore very similar to a conclave, After yet another meeting, after noon, the leaders of the main political forces, realizing that they could not delay an archaic process any longer, which in fact paralyzes government activity, announced that they had agreed to play the Mattarella card. A safe move, in which the current president also participated, Mario Draghi, who, seeing the institutional dead end of such an entity and beyond the fact that he would have wanted to be his successor, let him know that it was opportune for him to remain in charge of the presidency “for the good and stability of the country.”

The announcement of an agreement by the “Mattarella bis” meant relief in the country and in many European capitals, that after a week of talks that frightened everyone, they received a sign of continuity and stability.

“Winning team should not be changed”, summed up ex-premier Matteo Renzi, leader of Italia Viva, when celebrating that a white smoke had finally been reached. Renzi was one of the political leaders who, last night, had been the first to come out to reject the supposed agreement that at one point seemed to have been reached so that, for the first time in history, a woman would reach the presidency.

The leader of the League, Matteo Salvini and of the Five Star Movement (M5E), Giuseppe ConteIn effect, in a dramatic blow, they had made it known, with great fanfare, that an agreement had been reached to elect Elisabetta Belloni, a veteran diplomat at the head of the Secret Services. But it wasn’t true. Thus, aside from burning his name, they infuriated the former premier and leader of the Democratic Party (PD), Enrico Letta, a key man in the negotiations to seek a consensus figure, “super parties.” From Letta’s environment, “unspeakable maneuvers” were denounced by Conte and Salvini and an ultimatum came to support the will expressed by the great voters to reconfirm Mattarella.

This morning and after the chancellor, Luigi Di Maio, of the M5E, distanced himself from the “blitz” of Conte and Salvini and endorsed the Mattarella letter -reflecting another intern within his group-, in an umpteenth meeting it was sealed, finally, the agreement to unlock the psychodrama and ask the head of state to stay.

“A part of Parliament does not want to find an agreement, so we ask Mattarella to stay and that way the team stays with Mario Draghi at Palazzo Chigi”, Salvini came out to announce, who according to all analysts was the big loser of the battle by the Quirinale. Yesterday, in effect, his move to run for the current president of the Senate, Elisabetta Casellati, who failed resoundingly by garnering far fewer votes than expected, certified the breakup, in fact, of the center-right coalition. A second failure was having gone out to announce that the election of a female president, Elisabetta Belloni, had been made.

The big winner, instead, was Letta. Although the leader of the PD always stressed that there should not be talk of winners and losers, because with Mattarella “we all win”, the former premier always spoke of the importance of Italy keeping Draghi, who restored credibility to the country. That is why he supported the Draghi option as the new president, but at the same time he maintained that another shift of the outgoing president was “the best option of all”.

In a press conference, Letta thanked the “great generosity” of Mattarella, who, in the afternoon, receiving the caucus leaders of most of the groups, accepted the second term. “He told us that he had other plans for his future, but he told us that, if he served, he was there, when we asked him to stay,” Simona Malpezzi, head of the PD caucus in the Senate, told reporters as she left the Palace. of the Quirinal.

“It is a great day for Italy”, assured Letta, who was also self-critical and stressed that Mattarella’s re-election showed that Italian politics “is blocked and urgently needs to be renewed.” “We regret that it took all this time to resolve a complex situation, we did not give the country a good image – he admitted -, but I am happy that Parliament finally interpreted the general feeling of stability in the country”.