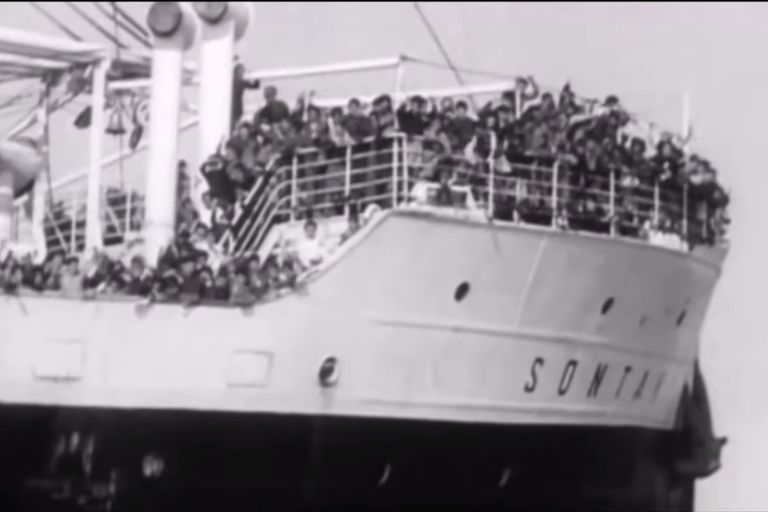 “I see with terror what happens in Ukraine”, the testimony of a “Girl from Russia” evacuated in the Spanish Civil War to the USSR


It is an almost forgotten page of history. In Spain they are known as “The children of Russia” or “The children of the War”, those thousands of boys who in the midst of the Civil War (1936-1939) they were “temporarily” evacuated from the areas under the control of the republican left to the Soviet Union to spare them the horror of the conflict.

But in the USSR, after the first years of warm welcome, they knew a greater horror: the German occupation of World War II and the famine. Thus, the “temporary” lasted about twenty years, and most of them lost all contact with their family. When they returned to Spain, between 1956 and 1957, in the midst of Francisco Franco’s dictatorship, the reception was not as expected, and many began to be discriminated against socially and politically, as potential Soviet spies.

A Trinity Perez -who is now 90 years old and has lived in Argentina for 64 years-, in June 1941 the Nazis’ “Operation Barbarossa”, He surprised her at the age of ten in a boarding school in Kharkov, the second largest city in Ukraine. “The bombings were tremendous. To protect ourselves we had to hide where we could with our gas masks. That is why I am terrified of what is happening now in Ukraine. I don’t give a damn about political interests. But I don’t want to see another war in that country where I lived”, he told LA NACIÓN during a video interview from Mendoza, where he is based.

Gonzalo Barrena, vice president of the Spanish association “Children of Russia”, -son and grandson of the protagonists of that episode- maintained in dialogue with LA NACION from Spain, that the message of this historic event, also looking at the present in the Ukraine conflict , is “Note that wars are always riddled with children, and those who lose the most are always the smallest”.

The organization estimates that of the 37,000 boys who were evacuated by the republicans to different countries in their rescue operation, about 3,000 traveled to the Soviet Union. Last year it was estimated that some 150 “Children of Russia”, including Trinidad Pérez.

At 90 years old, Trinidad – a widow, 2 children, 4 grandchildren – who graduated in the Soviet Union as a technician in Telephony and later as an engineer in Geodesy, she’s a tech fanatic and she is excited that she will soon get a newer computer to pursue one of her favorite hobbies, surfing the net for information and stories.

He accurately remembered dates and names of each of the cities in the different boarding schools that he lived in the Soviet Union. And yet She retains a blurred memory of the day of her departure in 1937, when she was 6 years old and her brother Martín, 8 years old. They were taken from their native Gallarta, near Bilbao, to the port and put on the ship Havana. “I was very small,” he excused himself to justify his lack of precision in his memories. “I have no idea how long the trip was, but there were so many guys on the boat. Many cried and prayed for their parents. Finally, I also missed my brother on board and did not see him again for many years”.

Far from what could be expected, the experience of the “Children of Russia”, in the first times of their stay, was generally very positive. In boarding schools they were given clothing, food, medical care, education and care of the highest level, far superior to what a Russian child could access. They had teachers in Spanish and Russian, with whom they established an affectionate bond. The government of the dictator Stalin risked its prestige before the Spanish republicans and their “revolutionary solidarity”.

“I don’t remember any kind of Marxist indoctrination. Each teacher only concentrated on his subject,” Trinidad said.

Barrena added that the ethics of many teachers who, even being Republicans, they resisted “indoctrinating” children in times of Stalinism, it meant for his grandfather, Professor Nicolás Diez Valbuena, to be imprisoned in a gulag, where he finally died. “In the times of Stalin and Franco, teachers in the Soviet Union were prohibited from saying anything positive about Spain. And the personal enmities translated into political denunciations, which cost my grandfather his life,” recalled Barrena.

Trinidad’s first destination was a boarding school in Leningrad – today Saint Petersburg -, then different cities in the Ukraine and, finally, Moscow.

“The bombing of the Germans surprised us in June 1941 in Kharkov. I perfectly remember when Foreign Minister Viacheslav Molotov announced on the radio: ‘We are at war with Germany’“, he pointed.

“The attacks were tremendous. In boarding school we had been trained to put on our gas masks in three seconds and take cover where we could”. With the war came hunger, cold, disease, and constant transfers from one boarding school to another as the Germans attacked different cities on the Soviet Western Front. Many “Children of Russia” remember boiling their leather belts to remove the fat and have something to eat. Trinity became seriously ill with tuberculosis and, again, his memories of that time become blurred.

When the war ended, he completed his secondary and university studies in Moscow and got a good job in a textile company.

Only in 1946, nine years after leaving Bilbao, did he meet his brother again in a boarding school in Ukraine. For him, surviving the war had been much harder, because he had to resist the terrible siege of Leningrad for more than two years.

Trinidad’s great disappointment was when he returned to his hometown, in the Basque Country, in 1957. His parents had already emigrated to Argentina and he moved in with an aunt. But it was the time of the dictatorship, everyone who arrived from the USSR was suspected of being a spy and was treated with reserve. “Ever since she was little, for years she had dreamed of having a family. And suddenly family life was a nightmare. As we were professional and independent women, in the city we were ‘the russian whores’, and among the neighbors the word spread: ‘Don’t talk to that person who is ‘communist’. I came to grab fist bumps with a cousin.

His emigration to Argentina in 1958 was not happy either. “When I got off the Urbasa ship in the port of Buenos Aires, I finally found my parents after 21 years, and there were three younger brothers whom I did not know. But my parents never expressed affection to me or let me talk to them about what I experienced in the Soviet Union. They cut me short every time I wanted to tell them something.”

Trinidad had already begun investigations to return to Moscow. But the one who was the man of her life crossed her path, whom she married and settled in Mendoza. There he currently lives.

The harsh experience of uprooting and war marked her forever. “I proposed that the fridge is always full for our children, and that they would never go hungry. And the doors of my house are always open to welcome and listen to them.”

“There is only one word that I would like to eradicate from my life: the word ‘war’. But unfortunately politicians come back to it again and again”, he concluded.