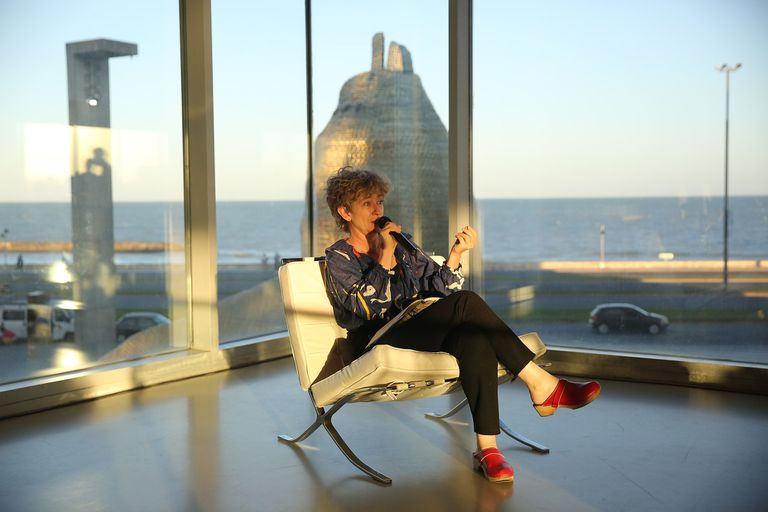 Night of Ideas: philosophy, performance and literature with sea air


MAR DEL PLATA.- Inside, on the top floor of the sea ​​museum, sitting in seats or on the floor, there are more than fifty who follow the presentation of the writer Silvia Hopenhayn. Downstairs, at the same time and on the outer beach, many others are already securing seats in the front rows to follow the talk that they will share an hour later and from a stage Darío Sztajnszrajber and Soledad Barruti. Despite the optimal afternoon for the beach for the early agenda, even though the Mar del Plata night had an expanded program with recitals and shows with the promise of massive audiences, the local scale of La Noche de las Ideas found a fantastic response from the public.

Mar del Plata is another venue for this meeting organized every January by the French Institute of Argentina and Fundación Medifé, this year in a more federal version with simultaneous programming in eight cities throughout the country, with activities united under the theme “(Re) Building the common”.

The Museum of Contemporary Art (MAR) is used to these frequent movements of visitors, now with several exhibitions that include a spectacular presentation of the group’s artists Tripe and works of the third edition of Biennial Al sur, entitled “Destination of the Spa to the Cosmos”. In interior years, there were more extensive programs, with specific art exhibitions. This time he convened from two more than interesting proposals and with recognized exhibitors, who not only limited themselves to presenting their arguments but also opened up to the exchange with those present in a more than colloquial atmosphere.

Hopenhayn, from the best interior corner of the building, with a window with an enormous view of the sea and the phenomenal golden wolf designed by Marta Minujín, captivated with its tour by authors and protagonists of works in the performance that he called “Repair for friendship”.

There he spoke to them about fiction and reality and about the value of those characters whom he called “those born in writing” and who give life to texts, which in the case of the classics he distinguished as “the immortals of literature”. traversed from Don Quijote of La Mancha to the creatures of Roberto Arlt, with several stops at Jorge Luis Borges and a final at Alejandro Dumas. of his novel The Three Musketeers He took the famous phrase “One for all and all for one” to close with a royal toast, glasses in hand, which he shared with his audience when the sun had already gone down.

And already with the night in the making, the second Mar del Plata proposal for this Night of Ideas was opened. The almost one hundred plastic chairs arranged were complete and, around it, hundreds of other attendees settled as they pleased and as they could. They arrived with lounge chairs, blankets or, without any problem, they sat on the somewhat more uncomfortable cobblestone floor.

“What’s the matter? Does the Indian (Solari) play?, joked a neighbor who passed by the place and was surprised by more than half a thousand attendees who covered the entire sector. Even from inside cars parked near the stage. “I could not miss it because it is one of those few that speak to you about difficult things of thought with great clarity and simplicity,” explained Norma, who only took a cushion, thermos and mate to listen to the philosopher.

And although the motto of this edition is “(Re)build the common”, Sztajnszrajber and Barruti advanced from the concepts of deconstruction and a step-by-step journey to work on that term, in particular on some contradictions, regarding what is “common”, who is part and who is left out.

A pleasant meeting from the back and forth with the public. “What comes from…”, Sztajnszrajber played several times, waiting for the audience to accompany him in his repeated references to Latin, which was the origin of many of the words he used as pillars to build his exhibition.

Despite the darkness there were some who, pen and notebook in hand, took notes of phrases and ideas. There was time for photos at the beginning and end of the talk, although several cell phones were held up and turned on in a row to record extended sections of the presentations.