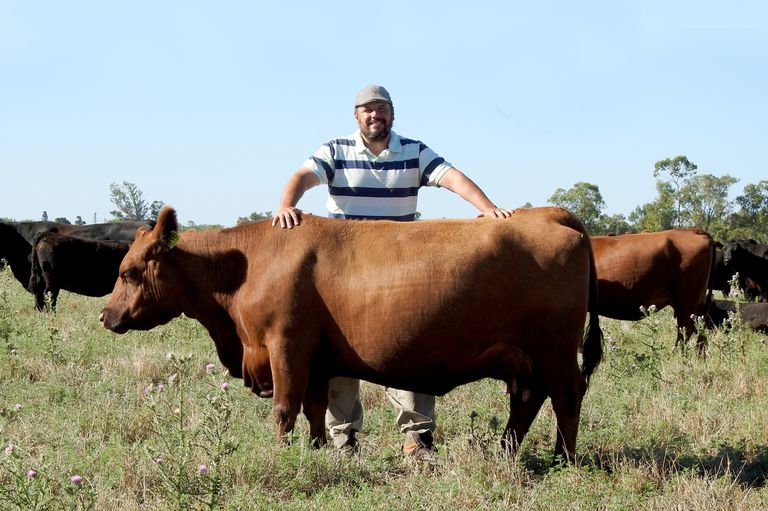 
At age 20, Alejandro Aznar was in charge of a commercial activity in the Buenos Aires suburbs that worked well, he sold canvas pools, but he always liked animals. Then, one day he decided to change his life and, with minimal capital and help from his family, he ventured into livestock farming. After many years of effort and sacrifice, today he is the owner of a herd that produces pedigree bulls demanded by artificial insemination centers and by other herdsmen. The main reason for its success is simple: efficient genetics, designed to work well in the production conditions of Argentina.

“I grew up in José Mármol, in the suburbs of Buenos Aires, but since I was a child I felt an affinity for the countryside and animals, so much so that at school I kept the money that my parents gave me for candy and I bought myself a chick or a rabbit. ”, Aznar tells.

“I studied high school at the San José Agrotechnical Institute, in San Vicente, and then I started my veterinary career. At that time -2002- my family bought a small farm in Del Carril, Saladillo district, in which we started with 12 cows, without abandoning urban commercial activity”, he recalls.

“From that moment on, I left the university to dedicate myself to what I liked, which was animal husbandry, even if it was on a small scale”, he points out. “I was very young and I fell in love with bloodlines and genetics in the small rodeo,” he explains.

“Later on came the soybean boom and in 2007 we had to take the cows to a 125-hectare farm that we bought on 17 de Agosto, in the district of Puan, in the southwest of Buenos Aires, a semi-arid region, with a lot of family effort” , keep going. “I had to travel permanently because I lived in Buenos Aires and I was dating. So at one point we decided to get married and go live in the countryside without knowing anyone, to be close to the cows”, he comments.

For several years the couple worked hard buying more bellies, but in 2008 and 2009 they faced a very serious drought and the worst snowfall in the last 60 years, which liquidated many neighboring animals and forced them to sell many controlled pure cows that Aznar had bought for 270 pesos. to 1,600. Then, as a result of the drought, it went from having 200 wombs to 30.

“Overcoming the bad moment, we decided to replace it with fewer but pedigree cows, which we pay with the amount collected from the compulsive sales caused by the drought. We made that decision because we had an urgent need to increase the turnover of our company, which was very small in scale; That is why we organized a cabin: a kilo of pedigree bull can be sold between $600 and $2,500/kg versus $230 for a kilo of steer”, compare. “This operation was important for us because, in addition, the most important bulls that we later raised were born from those cows,” he adds.

“After the drought, and by easing the pressure exerted by soybeans in Saladillo, we sold the 17 de Agosto field and returned to Del Carril again, buying more hectares, always with the help of my father,” says the rancher.

On the new property, Aznar put together the pedigree rodeo with a lot of personal work: although he has some employees, he personally inseminates the cows and controls the weight of the calves born in an artisanal way, with the help of his wife.

“The new proposal worked well until a well-known consignee invited us to sell breeding stock at an auction. And the worst happened: the firm went bankrupt and we were left without collecting 70% of what was sold”, Aznar recalls bitterly.

With the support of urban commercial activity and with low expenses, the Aznar couple overcame this new obstacle and continued producing bulls. This is how Esencial appeared, the most outstanding bull of the herd, who went to the artificial insemination center of Select Sires & Juan Debernardi, who spread Aznar’s program in one of the most important bull catalogs in Argentina. With this firm, for several years, he has been going to the United States to visit cabins to learn about and apply new technologies in development.

Simultaneously, the consignee Pedro Noel Irey offered to make an auction that generated excellent results. After these two events, other artificial insemination centers bought Aznar bulls and today that genetics is fully recognized, which allowed the company to continue growing in acreage and production.

The reasons for the herd’s good sales of breeding stock and semen are very simple. “We are looking for bulls of good racial quality that transmit fertility to their offspring. In addition, the selection allowed us to offer meek, easily manageable animals that ensure easy calving in 15-month-old heifers,” explains the cabin boy.

“We select the pedigree rodeo as if we were commercial producers looking for profitability and sustainability,” he highlights. Thus, the mother cows of the bulls produced are adapted to the pastoral environment, are rustic and are fed with the same fodder as a general womb.

The bulls are raised on pasture like any steer, so they can pass on high daily weight gains to their offspring. “We select by phenotype evaluating masculinity, structural correction, musculature, scrotal circumference, etc.; We also consider the productive traits by measuring them with the Expected Differences Between Progenies, which assess the area of ​​the eye of the rib, the length of the gestation of the offspring, the weight at birth, milk production, etc. For the measurements, we have the audit of the University of La Plata”, he clarifies.

IMembers of the Bovine Production Department control the animal identification methodology supported by DNA analysis, verify phenotypic measurements and verify compliance with animal welfare guidelines. “Clients value these controls and that the breeders are raised in the same conditions that operate in general rodeos,” argues the businessman.

Aznar mainly produces high-quality red Angus bulls, a product with little supply and high demand in the Argentine market, generally with higher prices than black bulls, because there are few herds that produce this product.

The process of genetic improvement of the colorado implemented by Aznar was peculiar and this is how he recounts it: “When the pedigree rodeo started, there were not many red Angus bulls to cross. So, I decided to take a longer path, but it turned out to be fruitful in the end.”

“From a very good black Angus bull -Leader- I made inbreeding. I crossed a daughter with a son of that bull, who had the colorado gene. With that cross, there was a 25% chance that the grandson would come out Red Angus. From these matings, four black calves and one red calf were born, which turned out to be Essential, an outstanding bull because it captured the genetic merit that other herdsmen had developed for many years in Leader. Essential is a bull whose semen is currently used by nearly every Colorado Angus herd.

The main reason for the meteoric rise of the Aznar bulls is to have created an efficient pedigree rodeo. “In the cabin we are obliged to be severe in the selection of animals. We understand that profitable wombs are those that conceive, give birth and raise a calf every year. Thus, the cow that does not become pregnant during a service period of three months is loaded for slaughter regardless of her background. We even discard those that become pregnant in the last 30 days, regardless of whether they have a nice phenotype”, define.

“We also seek to reduce the adult weight of the cows while maintaining the daily growth rate of the calves; We started with 657 kilos per animal as an average for the entire rodeo and in 2021 we dropped to 550 with selection and using bulls of moderate adult weight for three generations”, he completes.

The bulls go on sale with a semen quality test, negative scrapings for venereal diseases, morphological evaluation and DNA. Breeders are expected to have genetic consistency, that is, the ability to impose their characteristics on their offspring.

In the selection of sires, when incorporating external blood, the phenotype, the Expected Differences Between Progenies (DEP) and the genealogy are considered. In the phenotype -that is, the visual appearance of the bull- masculinity, racial quality, structural correctness, musculature, good testicles and docility are sought. EPDs are also considered, in terms of birth weight, gestation length, final weight, rib eye area, dorsal fat thickness and percentage of intramuscular fat. In genealogy, parents are sought to be similar to each other for genetic characters of interest.

“We make these decisions and strict controls and because we sell breeders, which are animals that should be improvers for commercial herds,” Aznar reasons.

The “La Esencia” cabin operates on 170 hectares of its own in Del Carril, in the Saladillo district, and 100 more leased to small producers in the area. There are 200 pedigree cows there.

Caring for the environment I

Aznar takes care of the environment. In the cabin he uses mostly natural field. When he has to clear a degraded lot to make pasture, he uses few agrochemicals, which he considers a means and not an end in themselves.

He only uses organic fertilizers, such as chicken litter from the sheds in the area, which has a high content of nitrogen, phosphorus and micronutrients, at a rate of four tons per hectare with an applicator similar to a fertilizer spreader.