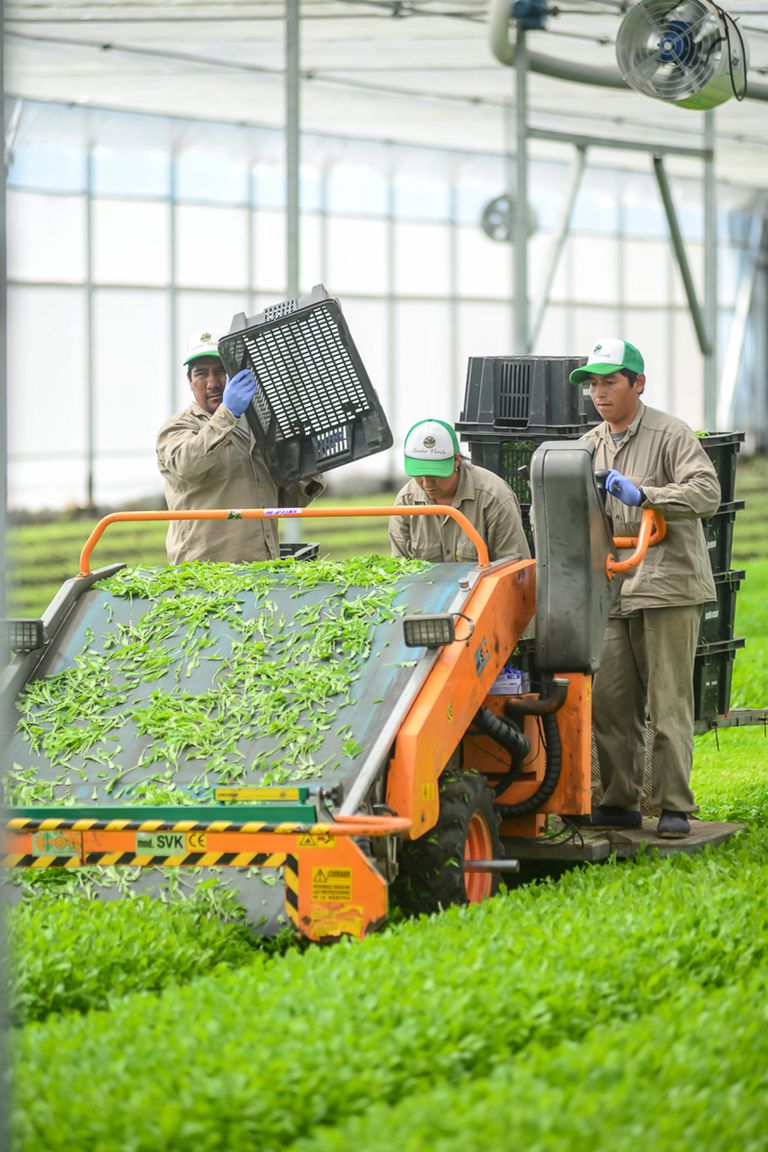 The green dream of two friends: they started with basil and today they supply the best restaurants with vegetables


“One day we asked Dolli Irigoyen to bring us a kaffir lime plant from Australia so we could reproduce it and sell it in Argentina,” they laugh Pablo Maseda and Agustin Benito to exemplify the interest and passion they have for vegetables. They are the creators of Sueño Verde, the company that has been supplying vegetables since 1993 to some of the most important restaurants on the national scene.

“All the chefs, in general, speak highly of us because we are not here just for business but we do it for the development of local gastronomy. Also, we know that if that works, it will also drag our project”, assures Benito.

“We could say that we do not sell to the restaurant, but to those who are going to sit in that place. So, I need the cook to take care of the product, that he knows how to handle it and that it arrives safely. It is very short, if not, the look of the client-supplier”, adds his partner.

The owners of Sueño Verde met in the early 1990s while studying Agricultural Engineering at the University of Buenos Aires. Then, they were the ones who planted, harvested and made the deliveries of basil, their first cultivated vegetable, in a car they shared. Over time, the project grew tremendously, and currently has more than ninety employees and a processing plant in Pilar, province of Buenos Aires.

“In the beginning, everything was learning. It happened to us that we went out very proud to sell our first boxes of basil. There we fell into three places: the greengrocers, the pasta factories and the restaurants”, remembers Benito. After discarding the first two sales channels, the entrepreneurs discovered that there was a great commercial vein within the gastronomic world. “We had a great acceptance. The cooks liked the idea that we brought them fresh vegetables because they arrived in better condition than what they could get through a greengrocer. This happened because from the harvest until they arrived at the restaurant, only two or three days passed. In them we found a partner who understood that good dishes come out of good raw materials and who was willing to pay a premium for that service”, he adds.

“We were also eager to incorporate new proposals. I remember that, at the beginning, they told us: ‘Do not bring me the basil that is dirty and rooted’. So, we cut it up and made bundles. Later, everything evolved to the current washing, cutting and sanitizing”, says Maseda about the added value that they include in their products.

From those first contacts, the engineers built up an extensive list of clients who, at present, It includes restaurants such as Don Julio, Narda Comedor, La Cabrera, Pizza Piola, Los Galgos and Yiyo el Xeneize. Also to hotels like Sofitel, Sheraton and the Llao Llao; and chains like Tostado, Green Eat and Le Pain Quotidien.

During its almost three decades of history, the company accompanied the various fashions and gastronomic trends that, in many cases, were the result of the vicissitudes of politics. “With the one-to-one came a different cuisine, because people began to travel like crazy. Then came 2001 and people couldn’t get on a plane anymore. Everything had exploded here, but what happened was that a large part of the public had already gotten used to going to Brazil and trying Brazilian food, or to Europe and learning about Italian or French food. That’s where the boom in ethnic foods began, because those people who used to travel and now couldn’t, found pleasure in eating something delicious and having good memories of the experience. From that moment on, what happened was that the restaurants needed new raw materials. I remember, for example, that it was Donato de Santis who suggested that we plant arugula when everyone here still ate radicheta,” recalls Maseda.

One aspect that differentiates Sueño Verde from the numerous horticultural projects that have emerged in recent times is that they have managed to standardize their food safety protocols to guarantee that their vegetables are safe. “We ensure traceability from the seed to the door of the premises. With a barcode we know what happened to each crop, where it was grown, who harvested it, who processed it, with what vegetable mix, what truck it was in and which customer received it. These are the values ​​that are not seen in our products but are very important. You go to the market and you have little information about it”, warns Maseda.

When talking about organic vegetables and the great boom that was generated by the sale of the bags, the owners of the company clarify that their products could not be labeled under that label. “We do BPA (Good Agricultural Practices), something that, in our opinion, is much more complete than just talking about organic”Benito explains. These standards include, among other aspects, regulations regarding production methods, processing and transportation of food.

In any case, Maseda points out that they do use some agroecological practices, such as crop rotation, the use of composted fertilizers and insecticides approved by the organic standard. “We use many practices of this type that are good. Ours is not an antagonistic model, but both can coexist. We have been producing in the same place for twenty years and we continue to maintain high yields”.

As an example, Benito explains that the use of pesticides could be compared to sporadic bodily discomfort. “I make you a basic concept. You get a headache once and you go and take an aspirin. The problem is if you take the whole tablet. When we have to make a phytosanitary product, we use a specific product for a certain raw material. That does not happen in the usual market because it is very expensive to have different products. Most use a ‘kill everything’ without dose and without waiting time (days that must be counted between when the product was used and when the vegetable was harvested)”. To check that the food produced is indeed safe, Maseda adds that they periodically carry out analyzes of “pesticide, bacteriological and physical chemical residues of the water.”

Within the production gear of the company, the concept of “seasonality” would seem to be located in a tug-of-war between the demand of restaurants and the interest of their owners to respect the crops of each season of the year. “We have a price list that we send to restaurants, which includes a twelve-month traffic light with red, green, and yellow. There it tells you the season and the critical moment. If you want to put a product in red on your menu, you have to know that there will be little, that it will not be the best and that the price will be expensive. We try to bring seasonality but, as in everything, there are the most flexible chefs and the least flexible ones”, says Benito.

“One of the first fights we had with restaurants was that, in the beginning, they put a product that had to be yes or yes on the menu for a certain period of time. So, we had to ensure consistency. That has been evolving. Today there is much more talk about the concept of seasonality and of understanding that these vegetables have better organoleptic and nutritional characteristics than a product out of season”, continues Maseda.

After consolidating as suppliers to several stores, the owners of Sueño Verde began to make additional products, such as salads, drinks, and dressings. Its development involved long days of research and, in many cases, the tracking of seeds that were not available in Argentina. “We have traveled and have contact with foreign seed catalogs. Also, today with the internet, you can see companies from Europe and see what the new products are. We also talk to our chef friends and that is a good way to get advice on what ingredients we can produce. We recently launched a new salad called Citrus, which consists of a mix of leaves with green and red sorrel. To achieve it, we had to bring the red sorrel seed from the United States because it was not available here. With local development, we produced it and, only after two years, we are able to sell it”, explains Maseda.

“All the time we look at trends and we are one step ahead for when that becomes fashion. There are also products that come and go. I remember when we started with the kale. A few test batches were made and, suddenly, it slowed down a lot, but when the boom came and the juice appeared everywhere, we already had the know-how to be able to produce the different varieties of this vegetable,” complements Benito.

One of the main criticisms leveled at the company, especially on social media, is that they use plastic wrap to package the products they sell in their online store, in large supermarket chains, and in neighborhood delis. In this sense, Benito argues that conservation is highly complex due to the speed with which plants decompose. “I invite you to prepare a salad, put it in a bag and tell me how long it lasts. For us, in order for a salad to be preserved between seven and ten days, we had to train in post-harvest. Our packaging It is not a whim, but thanks to him today they can enjoy our products, for example, in Comodoro Rivadavia”.

In any case, by way of closing, the engineer says that caring for the environment is an issue that keeps them awake and that, for a long time, they have been working on a version ecofriendly of the wrappers. “We are changing everything that is packaging to biodegradable materials, such as bioplastic. This type of salad wrapper does not yet exist in the world and we are developing it. Our objective is to achieve a European-level company in Argentina”.