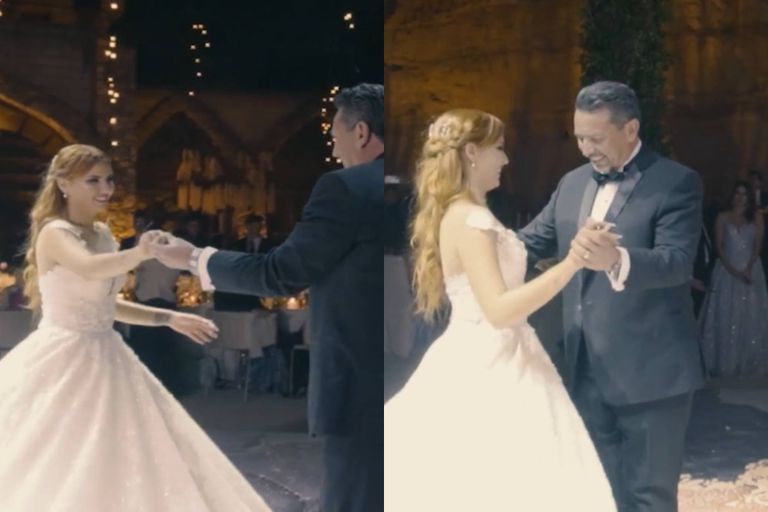 
January 20 Mexican youtubers Celeste Pellegrini and Juan Pablo Eguiarte Martínez got married. In a massive event with 250 guests, they celebrated their love of pure luxury. The wedding was shared on all social networks but there was a specific moment of the celebration that became viral: the Vals. The bride and her father decided to surprise everyone and they did a particular performance full of joy and with the most fashionable dance steps.

After nine years of love, on September 18, 2020 the famous youtuber – popularly known as Cellegrini – received the marriage proposal from Juan Pablo “Banaz”. The also influencer asked him in surprise if he wanted to be his wife in the middle of a movie. For the occasion, he projected on the big screen from the first moment he thought of telling her. She answered yes and from there, The 28-year-old shared with her followers the preparations for the great event that took place in mid-January.

His almost three million fans expected to know the details of the celebration of that love that crossed social networks. Between the photos of the ceremony, the decoration, the type of dress and the guests, It was the brand new girlfriend who shared a particular video on TikTok that in a few hours went viral, It exceeded a million ‘likes’ and received thousands of comments for the joy it conveyed.

The clip shows the moment when they performed the traditional waltz, which begins with the bride and groom and is then replicated by the father and daughter. At that moment, after performing the classic dance steps, the music began to present problems and the DJ apologized. Immediately afterwards, the popular song by Tokischa and Rosalía began to play, “Linda”.

Both stood in front of the camera and replicated the well-known TikTok trend, which consists of making funny movements according to the lyrics of the song. This was followed by “El avioncito” by GiBlack and “Se le ve”, by Sech, Lenny Tavárez and Justin Quiles, among others. These are the most popular songs on the web, which have their own choreography.

The protagonists of this fun moment received all the applause from the guests, who initially really believed that it was a technical problem with the music. However, they later realized that all It was a sketch totally planned by the influencer, who wanted to modernize this special dance piece by combining it with the content that he usually makes on social networks.

Quickly, the publication was filled with comments in which the original idea was mentioned, but also many of them they were directed to the joy that both transmitted.

Specifically, it was the father of the bride who received all the praise. “The gentleman dances better than me”; “I was happy as if it were my dad”; “He stole all eyes”; “There is a lot of love here”; “His dad dancing is everything”, “That man is all cool”; “The happiness of that father is all we need”, were some of the comments left on the post.