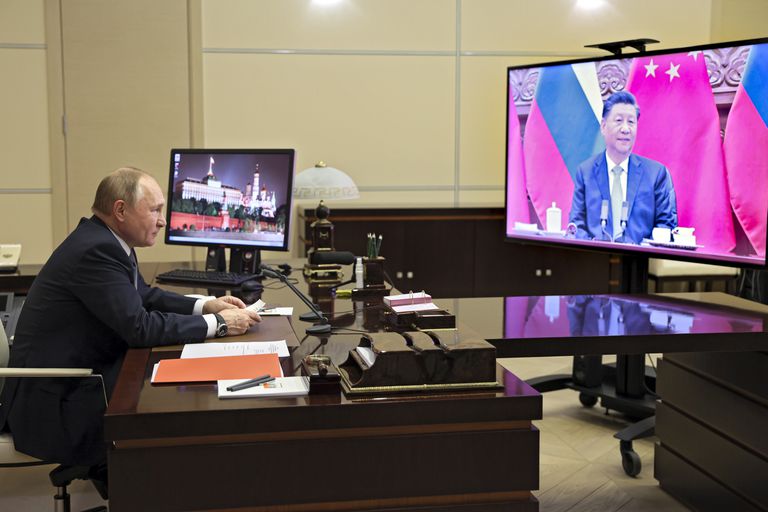 China, the silent player that can take advantage of the fight between Russia and the US


BEIJING.- Beijing, separated from Kiev by more than 6000 kilometers, is only concerned about the Ukrainian issue that a war will steal the Olympic spotlight, while calmly contemplating a foreign conflict without risk of splashes and that it can bring him American attrition and strengthened ties with Russia.

His diplomacy, in the face of a polarized global context, It has underlined its principle of non-interference in internal affairs and recommended dialogue, among other trite banalities. Its press has devoted derisive attention to the issue that monopolizes global news, and only a reading between the lines of the recent chat between Wang Yi, the Chinese foreign minister, and his American counterpart, Antony Blinken, hints at interest.

Wang encouraged Washington to retire the Cold War mentality, take Russia’s demands seriously and stop justifying military expansion in the name of its own security. Moscow, for its part, admitted that it promptly informs Beijing of the details. It is unlikely, however, that this harmony will push China to go further. It will not heed US calls to hold down Putin or align itself with Russia in a conflict that would increase fears in Europe of its rise or give NATO air when much of the public disputes its usefulness.

China will be neutral and abstain at the UN, confirms Stanley Rosen, professor of political science at the United States-China Institute at the University of South Carolina. “He wants to keep the alliance with Russia, but he doesn’t want territorial changes because he has his own interests, especially in central Asia, where he is a major player. It is clear that he does not want the revival of the old Soviet empire,” he adds.

The Ukrainian fire shifted American attention to Russia and gave China a respite as Joe Biden persevered in hostility to Donald Trump. Washington’s war drive gives periodic respite to Beijing, which enjoyed a decade of relative peace after the 9/11 attacks.

The exuberant Chinese rise is explained by many analysts by that period in which the United States became entangled in the Middle East and it is not difficult to imagine Beijing’s relief these days.

Ukraine also measures Biden’s international commitment after the hasty and chaotic flight of US troops from Afghanistan.

Ukraine marks its second test and the current threats of military intervention in Russia are not too different from those heard by Beijing in matters such as Taiwan and the South China Sea. It is about China and the rest of the world finding out if Biden is determined to reverse Trump’s absentee “America First” policy or if he is nothing more than what Mao Tse-tung dismissed as a “paper tiger”.

Sino-Russian relations have never been better, the two sides repeat. Xi Jinping and Vladimir Putin have shared 37 videoconferences since 2013 and their upcoming meeting in Beijing will be the first that the Chinese leader has held with a counterpart since the pandemic began. The 500-person Russian delegation to the Winter Games will offset boycotts by top officials from the United States, Britain, Canada and Australia. Both are sure to emphasize their “old friendship” and promise to strengthen their collaboration.

That political sympathy has greased the economic synergy. China is Russia’s first trading partner since 2010, two years after Putin proclaimed his “turn to the East”, and its main buyer of raw materials. Its bilateral trade is chaining records: it touched 150,000 million dollars in 2021 after an annual increase of 35% and they plan to reach 200,000 million in 2024.

Three years ago, Russian gas finally began to flow to China after signing a contract that had taken more than a decade. Geopolitics advised ending the feverish haggling over price: China feared that the United States would disrupt its naval lines and Russia saw its business in Europe compromised.

Ukraine returns the stage because the “severe sanctions” aired by the West would inevitably drive Russia towards China. It is not an idyllic way out for Moscow, worried about the progressive economic dependence on Beijing, but it is the only one. China absorbs a fifth of Russia’s international trade, while Russia barely accounts for 2% of China’s.

“It will be nonsense for the United States to pass sanctions that push China towards Russia. Maintaining tension with both is nonsense”, says Xulio Ríos, director of the Chinese Policy Observatory. “Beijing is on the lookout and will not change its neutral attitude, although it is undoubtedly more understanding of Moscow. That affinity is for now an indefinite border. Russia will show its closeness to China at the Games and China could reciprocate, perhaps with statements of support or some political gesture, but it is clear that in the military field it does not want to know anything, “adds the analyst.

The USSR helped Chinese industrialization in the middle of the last century, but political differences soon caused mistrust. Today the opposing interests of two empires in common areas persist and there is also the Russian discomfort with the role of younger brother. They send, however, the shared laments towards Washington’s imperialism and its habit of piling missiles behind its borders or leading defense organizations to harass them, be it NATO in Europe or the Aukus and the Quad in the Pacific.

Neither external nor internal calculations recommend that China abandon its comfortable position of observer, argues Anthony Saich, a sinologist at the Harvard Kennedy School.

“It is an important year for Xi, who is seeking a third term as party general secretary. Stability is a priority and he wants to maintain good relations with Washington. The last thing you want is to be forced to publicly support Russia in a conflict against NATO and the United States,” says Saich.