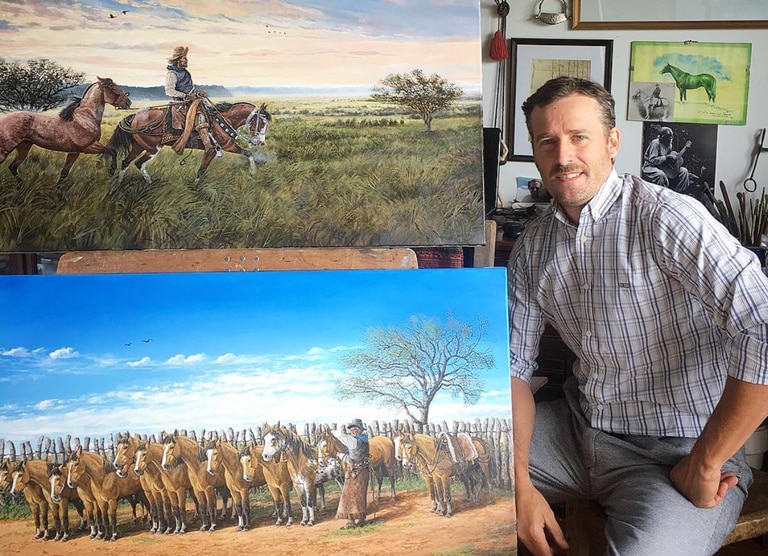 
“The gauchos formed the armies of freedom and independence”, was a thought that Bartolomé Miter always remembered and with whom you faithfully identifies the painter and producer Francisco Madero Marenco.

Grandson of the costumbrist painter Eleodoro Marenco, 41 years old, From a young age he seeks to vindicate the image of the Argentine gaucho and its traditions. His passion for horses and country customs comes from a young age when his father was butler of a farm in Juan José Paso, between Trenque Lauquen and Pehuajó. Every morning, he grabbed his bottle that his mother prepared for him and far from going back to bed, he went to the corrals, when he heard the cowbell of the godmother mare that brought the herd of horses.

However, family issues led him to the big city, where he did his primary and secondary studies. Longing for the countryside, every afternoon he visited his grandfather, who in long talks, while they shared painting times in the atelier, I told him about the importance of traditions and from that “anonymous gaucho”, who fought at the dawn of Argentine history.

“My grandfather was delighted that a grandson of his is interested in his same things and that he liked to paint like him. I introduced myself as ‘my colleague grandson’. In 1991, when I was 11 years old, in a big exhibition that my grandfather did, I presented two works in pastel that he had given me. He was proud that he had inherited his gift.” counted to THE NATION.

already a teenager, On weekends he accompanied his father to a family field in General Lavalle and thus he resumed that link and that love with the rural, from which he would never leave: “I was finally able to have my own horse and errand.”

Meanwhile, the afternoons in Eleodoro’s painting room became more and more frequent. “He gave me old books from the 19th century by travelers from the Rio de la Plata so that I could understand the history of the country. When he got sick, I decided to spend most of my time at his house. I installed myself in the file I had and read about the customs of the gaucho. My grandfather had been part of that world and I wanted to make the most of it because I knew that these were times that were not going to return.” story.

“When he died it was a great loss for me. I felt the need to continue with his legacy, that the traditions and customs of the countryside remain in force. It was my responsibility, I had to take charge,” he added.

As detailed, he does not paint because he likes to paint, but rather because in each brushstroke he seeks to add value to the story of that forgotten character. “I couldn’t paint anything else.”

After studying economics and agrarian administration, he returned to the countryside with his father. Even without knowing if the path was painting or being an agricultural producer, He decided to tempt fate and organized an exhibition with 24 paintings of his own, all of which were sold in less than 48 hours.

“It was a sign. From then on, I never stopped. Likewise, with money that he had, as backup, he bought cows and put them in a rented field”, Indian.

Installed for some time in General Madariaga, province of Buenos Aires, day after day, he seeks in his pot converted into a workshop, to capture the events of a past Argentina. Prior to an exhibition, which is generally in the spring so as not to run into field work, He spends more than 14 hours a day in his atelier.

Without an exact number, he believes that he has already sold more than 400 paintings to hundreds of agricultural producers throughout the country. In addition to Argentina, he also exhibited in Bagé and Esteio, in Brazil. For 20 years he has lived from painting. But in pandemic, the galleries were closed and there were no exhibitions and, it was the cows that allowed him to continue.

“I remember the last moments of my grandfather. My right hand (with which he paints) took his left hand (with which he paints) and we stayed together until he decided to leave. I’m going to be a painter as long as my hands allow it. Although I know it’s difficult, I want to keep fighting and, in every painting I paint the traditions of my land can be upheld”, finished.