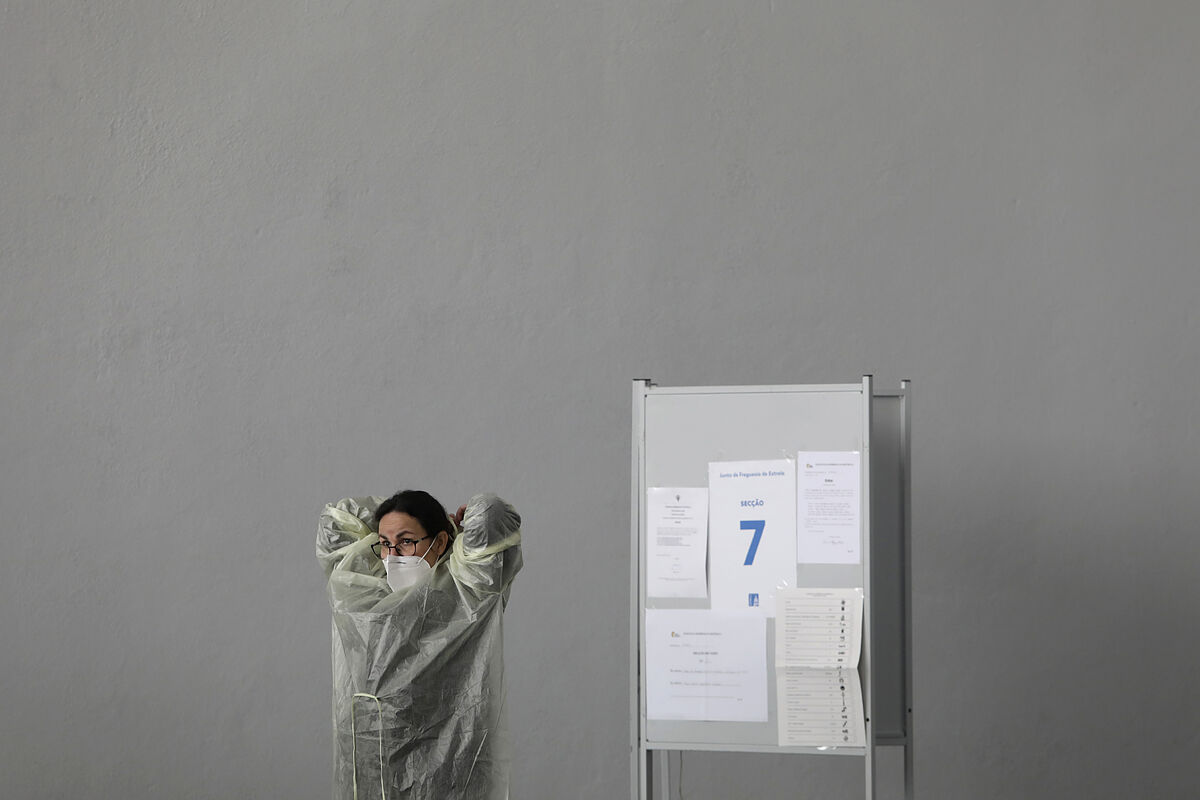 Portugal: an election day without fear of micron

The darkest moments of the pandemic in Portugal left an iconic image that went around the world, at the height of the burning pyres of India or the mass graves of New York: a huge row of ambulances in which they were treated, in a first diagnosis, to hundreds of patients with Covid waiting for beds to be released at the Santa María Hospital in Lisbon. It was a year ago and the situation, fortunately, has changed a lot.

Now every day the record for infections is broken and there are more than a million Portuguese confined between confirmed positives and close contacts, and yet a possible end to this nightmare is already in sight. In the midst of election day, we visit several polling stations in the center of Lisbon. What we find in them is strict organization. Outside, stickers on the floor with designated points to queue respecting the distance and a notice board with the tables so that the query is outside. At the entrance, continuous colored lines to the voting rooms, a mandatory mask and a person cleaning, after each vote, the booth in which the voter enters to choose their ballot. Inside the rooms, there is current, with doors and windows open to renew the air. “Voters come in here, but the Covid stays out”, says the president of one of the electoral tables of the XX de Aguas, in the middle of Avenida da Liberdade.

The fear of the Government was that many Portuguese would stay at home and not vote. And the analysts tried to know who was harmed or benefited by a high abstention rate. Some took it up to 50%. In 2019, during the previous legislative elections, there was an abstention of 51% and there was still no coronavirus, but today at noon, 23% had voted and rose to 47%, seven points more than in 2019 at 4:00 p.m., which meant that it was going to exceed the figures of previous years, as it was. “I think that the pandemic has been able to harm the big parties, since the militants of the small groups are usually more mobilized,” says Nuno Magalhes, director of political context at the LLYC consultancy.

The members of the table do not wear PPE suits, as in some of the last Spanish regional elections, but they do wear FFP2 masks. “I feel safe in this environment,” says one of them. “All the protocols are set up so that there are no contagions here”, comment. Voters vote with their own pen. If they forget, they can take one from the open box at the entrance and take it with them as a souvenir, but none are reused. Voters leave through a different door than the one they entered and thus do not cross paths with each other.

Only in this way can a vote be mounted in a viral scenario like this, with anot out of 10 Portuguese affected by the virus or by confinement. The Government recommended that all of them, positive and confined, go to vote at the last minute, from six to seven in the afternoon, but it is presumable that many have done so throughout the day. “I’ve already gotten over it, like the vast majority of people, and it was a mild cold,” says Joao, a waiter at a pastry shop from the center of Lisbon who has escaped to vote on his break. “In reality, all Portuguese families and all workplaces have had infections. This already lives with us and, luckily, deaths have been greatly reduced and we will soon be able to lead a normal life,” says Jorge, a pharmacist in the area.