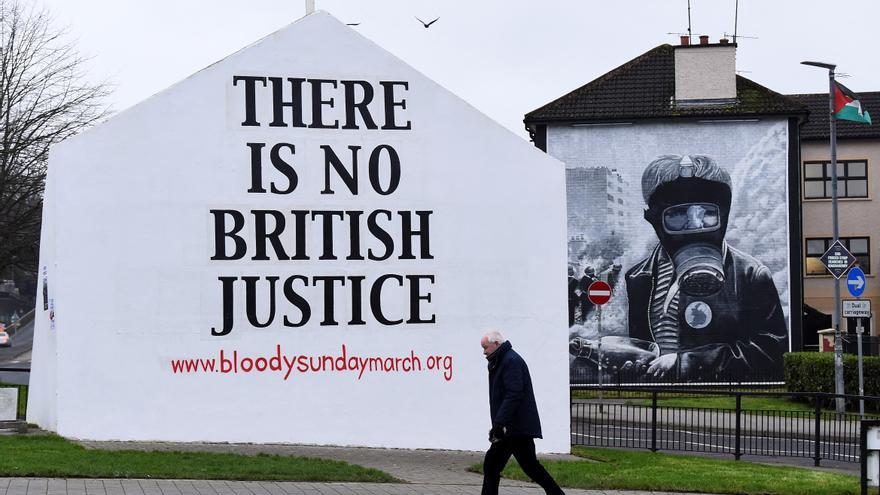 
There are two words written in red in Irish history: ‘Bloody Sunday’. Now 50 years ago, on the afternoon of January 30, 1972, British soldiers opened fire in the Northern Irish city of Derry against unarmed protesters. Some 15,000 people participated in a march for civil rights and in protest at the arrests without trial of nationalists suspected of belonging to the Irish Republican Army (IRA). The Catholic community in Ulster she was tired of enduring poverty, exclusion, lack of freedoms and a social system that favored the Protestant unionists and turned them into second class citizens. The situation had begun to tense in the late 1960s with increasingly violent attacks on nationalists. The Conservative Prime Minister Edward HeathHe sent the Army into the streets to bring order. The soldiers were received by the Catholics with relief and cups of tea, as the news reports of the time show. The idyll did not last long. The protective army soon became Army of occupation.

On ‘Bloody Sunday’ in Derry the bullets of the First Battalion of the Parachute Regiment they killed 14 civilians, six of them minors, and another 13 were injured. The image of the priest Edward Daly waving a bloody white handkerchief at soldiers, trying to evacuate a 17-year-old girl, Jackie Dubby, who would die soon after, became a symbol of the conflict. The soldiers had entered the nationalist neighborhood of Bogside, a labyrinth of alleys where they should never have entered. The shot fired into the air by a lieutenant as a warning to the demonstrators was confused by the rest of the troops with that of an IRA sniper stationed in the ghetto dwellings. Believing they were cornered, the soldiers lost control and they opened fire indiscriminately into the crowd. A year earlier the same regiment had killed another 10 civilians in Ballymurphy, a republican fief west of Belfast.

The massacres provoked worldwide repudiation, strengthened the IRA’s cause, earned it international sympathies, they helped him raise funds, especially in the United States, and fueled sectarian violence, with death and destruction, that would not cease for three decades. They say that the day after ‘Bloody Sunday’ there was an avalanche of young Catholics ready to go underground. Martin McGuinness was already inside the paramilitary organization when he participated in the march. He was 22 years old and number two in the IRA in Derry, his hometown. McGuinness, now deceased, ended up being part of the leadership of the band in the bloodiest years. During the slow transition to the terrorist group’s politics he was a decisive man. Beside Gerry Adams would end up making possible disarm of his and the peace agreement that ended the conflict.

A hasty official investigation by the British authorities tried to cover up the atrocity and justify what happened in Derry. The call ‘Informe Widgery’ he exonerated the Army and blamed the demonstrators whom he presented as aggressors. Was false testimonials that they were armed and shot at the soldiers, so they repelled the attack to defend themselves against the terrorists.

In 1998 the former Labor Prime Minister Tony Blair announced a new investigation, which lasted 12 years. Judge Mark Saville, in an exhaustive 5,000-page sentence, concluded that the soldiers had lied and shot innocent and unarmed civilians, without issuing any warning notice. The judge, however, ruled out that it was a premeditated plan or a conspiracy by the British State.

In a subsequent police investigation, the designated ‘soldier F‘, was the only member of the parachutists prosecuted for double murder and for five other attempted murders. The case has not proceeded. Veterans groups and conservative politicians have been making downing street campaign so that the persecution of members of the Army who were involved in the decades of the conflict be prohibited forever. In the case of ‘Soldier F’, prosecutors dropped the charges last year to the outrage of the families of the victims.

This Sunday in Derry those families will walk the original route that the civil rights march took. One of them will be John Kelly. His brother Michael was 17 years old when a bullet killed him. The anniversary, he hopes, will serve to show “that no one has been brought to justice for what he did.” Later at the Museum of Free Derry they will meet with the Prime Minister of Ireland, Micheál Martin. The museum tells the story of what happened in the city between 1968 and 1972 from the point of view “of those who were involved and affected by the events.” It was built on the spot where two men were killed and three others were injured that ‘Bloody Sunday’.