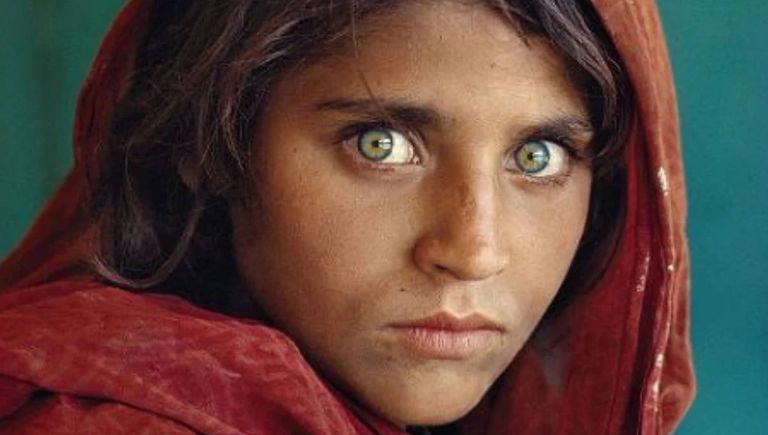 The ordeal of “the Afghan girl”: this is how the icon woman of the refugees lives today after fleeing from the Taliban


Sharbat Gula became famous, without knowing it or wanting it, in 1985 for a photograph that appeared on the cover of National Geographic magazine. His defiant and moving image and gaze showed the world the drama of war refugees. He was twelve years old and she never knew the effect of her piercing green-eyed stare until 17 years later when she was found again and photographed again.

The story begins with the photojournalist Steve McCurry who in 1984 was working in the Middle East to cover the conditions in which people lived in refugee camps on the border between Pakistan and Afghanistan. At that time, the Afghan country had been invaded by the Soviets in an endless war that had started in 1979 and much of its population fled to Pakistan in search of some peace. However, the situation there was also critical.

In fact, McCurry found Sharbat at a school for Muslim girls set up in a tent. like the rest of the refugee homes in the Nasir Bagh area, in Pakistan. In a note from National Geographic, the photographer said that her green eyes were the first thing that caught her attention from that place, but who, perceiving her shyness, wanted to approach her last. She agreed to pose: “I didn’t think his photograph would be any different from any other I had taken that day”, remembers that morning in 1984 that he spent recording the odyssey of the refugees from Afghanistan.

In June 1985, the portrait appeared on the cover of the magazine and had an unusual importance that touched the soul of the entire world with its sea-green gaze and the tragedy of war that it recounts. In National Geographic was baptized as “the Afghan girl” and for 17 years nobody knew his name or anything about his life.

Due to the reach that the iconic photo had, In 2002, a team of National Geographic, headed by McCurry, was sent to find that woman and to find out what had happened to that girl after almost twenty years. McCurry found her in Afghanistan, in the town of Tora Bora. As soon as he saw her, he said: “It’s her.” Though behind his parchment-made face and his cheekbones already rounded by misfortune one after another, A lifetime of pain, I still defied that glare. At that time, he was around 28 years old plus minus two, no one knows for sure.

“He has had a terrible life. Many here share their experience,” McCurry said. Sharbat Gula is a Pashtun, the most warlike of the Afghan tribes. The Pashto are said to be at peace only when they wage war.

Sharbat Gula, now 49, in November 2021, applied to leave her country when the Taliban came to power in August. “The Italian government facilitated and organized its move to Italy as part of the program for the evacuation of Afghan citizens and the plan for their reception”, explains a statement. This is how Sharbat arrived in Rome a few months ago.

a life of pain

When she found out in 2002 that she was world famous, at first, she was angry because she didn’t want to be photographed, but When he found out about the good repercussion his image had had in the world, he was happy for having given meaning to so many lives. However, yours has been an ordeal. In 2016, she was arrested for having false Pakistani documents so that she would not be deported. Before lived between afghanistan and pakistan in a refugee camp and then on a mountain not unlike. He married and had four daughters.. Her husband and one of them died of hepatitis. She was also hospitalized for the same but survived.

He lives for his daughters. For his education. Robina is thirteen years old, Zahida, three, and Alia, one. According to his brother, he has never known a moment of happiness, except perhaps on his wedding day.

At the age of thirteen he had to use the purdah, the life of seclusion adopted by many Islamic women upon reaching puberty by which they stop showing themselves in public. It consists of wearing a purple burqa that separates her from the world and from the looks of any man other than her husband. In the 2002 interview with McCurry, she wears a black shawl that covers her face and says, “It’s a beautiful garment, not a curse.”

when they ask him how did you survive these years, she replies firmly: “It was God’s will.” Before coming to Rome, Gula lived in Kabul, Afghanistan., but could not return to his hometown. His home was in the Kot district, in the east of the country. An area that became one of the strongest radical bastions related to the extremist organization calling itself the Islamic State (IS)characterized by their cruelty. “Our life is a struggle that goes from hardship to hardship”Sharbat told the BBC in a 2017 interview. At the time, Gula’s only goal was to stay home, regain her health, and see her children grow up and receive an education.

After spending fifteen days in prison and hepatitis, Sharbat recovered and returned to Afghanistan where she was received by el presidente Ashraf Ghani in the government palace and by former president Hamid Karzai. “They showed me respect, they gave me a warm welcome. I thanked them. God bless you,” Gula told the BBC in 2017. The government assured him financial support and to buy him a house in Kabul. “I hope the government keeps its promises,” he added.

Before the arrival of the Taliban, Sharbat had plans for the future: “I want to create a charity or a hospital to help all the poor, orphans and widows.”