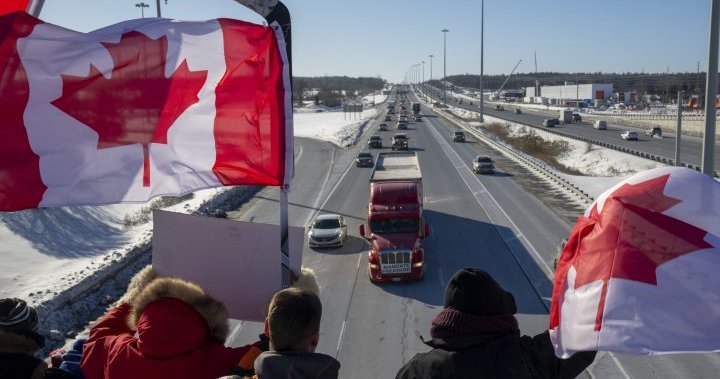 
Residents of the national capital are again told to avoid traveling downtown as a convoy of trucks and cars hamper traffic in protest of government-imposed vaccine mandates and COVID-19 restrictions.

Truck traffic downtown on Parliament Hill has made many downtown streets impassable for vehicles, police say.

Big rigs, passenger vehicles snarl through downtown Ottawa as the convoy of truckers parks in front of Parliament

Other streets have been closed and local police say they are working to mitigate the impacts of the gridlock on downtown residents and businesses.

It is unclear when the convoy of vehicles plans to end their parking protest, as some protesters have vowed not to move until all their demands are met.

Sitting in his truck, Scott Ocelak said he was warned he was locked in place until Sunday, but planned to stay until Tuesday at the latest.

The rally was initially aimed at denouncing vaccine mandates for truck drivers crossing the Canada-US border, but the movement morphed into a protest against a variety of COVID-19 restrictions and the government of Prime Minister Justin Trudeau.

“Everyone is united and we just needed a spark, and this is the spark that we needed,” Ocelak said Saturday. “We are all on board and we are all here together. It is to end all mandates for everyone.”

4:49
Hundreds of truckers converge on Ottawa to protest COVID-19 restrictions

Hundreds of truckers converge on Ottawa to protest COVID-19 restrictions

A memo pushed by Canada Unity, the group that primarily planned the convoy, unlawfully demands that Governor General Mary Simon and the Senate force the federal and provincial governments to lift all COVID-19 restrictions, including vaccination mandates. It does not mention truckers and was initially sent to the Senate and to Simon on December 11.

“People are losing their jobs because they don’t want to get vaccinated. I don’t want the vaccine.”

The vast majority of truckers are vaccinated. The Canadian Trucking Alliance previously estimated that about 10 percent of drivers were affected when vaccinations became a requirement to cross the Canada-US border this month.

The atmosphere on Saturday was largely peaceful and jovial, with the smell of marijuana wafting along with a broadcast of vaccine conspiracy theories. Police say no incidents of violence or injuries were reported on Saturday, but they plan to maintain a heavy presence on Sunday.

Saturday’s events saw protesters jumping on the Tomb of the Unknown Soldier and others placing an inverted Canadian flag and an anti-vaccine sign on a statue of Terry Fox. Both actions drew vocal denunciations.

Convictions also poured in from federal politicians of all persuasions against protesters carrying Confederate flags, as well as flags and signs bearing Nazi symbols and slogans.

Some trucker convoy organizers have histories of white nationalism, racial

One such Nazi image was captured in the background of a television interview with Conservative MP Michael Cooper.

The mayors of the two cities that overlap their driving in Alberta, Edmonton Mayor Amarjeet Sohi and St. Albert Mayor Cathy Heron, called on Cooper in a joint statement to apologize for “his behavior and poor judgment.” ”.

In a statement late Saturday, Cooper said he was unaware of someone “with whom I am not associated” waving a Canadian flag with a swastika drawn “some distance behind my back” while doing a television interview.

He said he condemns Nazism and said whoever flew the flag with the symbol “should be eternally ashamed,” adding that the person did not represent those who acted responsibly whom Cooper supported.

Fellow Alberta Conservative Damien Kurek was also at the protest on Saturday and in a tweet condemned “any sign of hate, anti-Semitism or disrespect.” He wrote that many