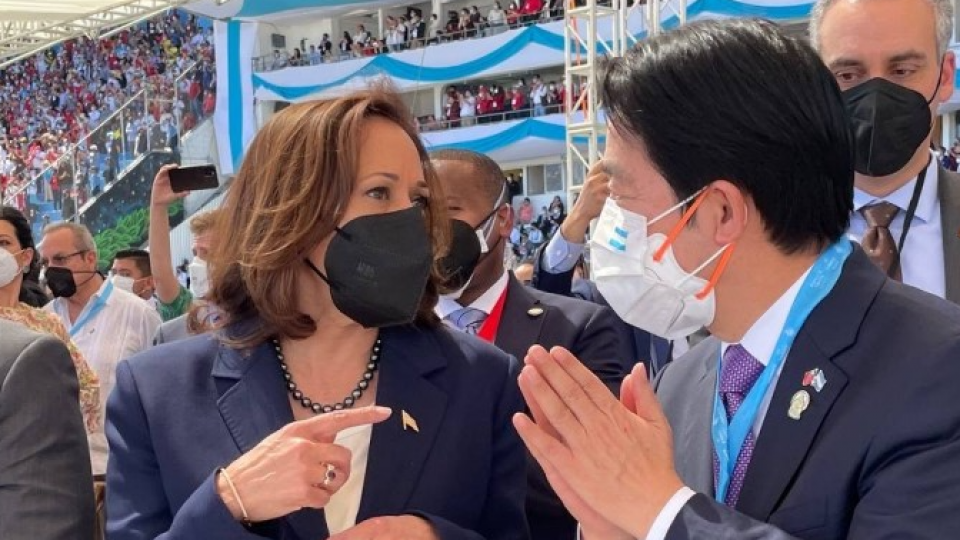 Vice President Harris talks to Taiwan’s No. 2 in Honduras


The vice president of the United States, Kamala Harris, said that she spoke with the vice president of Taiwan, Lai Ching-te, on Thursday in Honduras, where both traveled to attend the inauguration ceremony of the new leader of the Central American country, in a move that could upset China.

Harris told reporters that the conversation with Lai was “brief” and about a “common interest” in Central America. She said they didn’t talk about China.

US Vice President Kamala Harris (center) speaks with her Taiwanese counterpart Lai Ching-te in Honduras on January 27, 2022, as they attend the inauguration ceremony for the Central American country’s new leader. (Central News Agency/Kyodo)

According to Taiwanese media, Lai thanked Harris for the US government’s support for the self-governing democratic island. Media reports also described the public exchange that took place at an international venue as “a diplomatic breakthrough.”

Beijing sees Taiwan as a renegade province awaiting reunification, by force if necessary, and is particularly wary of any US move that appears to constitute official contact with the island.

Beijing has expressed strong opposition to Lai’s visit to Honduras, which is one of 14 countries that maintain formal diplomatic relations with Taiwan. China has been urging him to sever ties with Taipei.

Chinese Foreign Ministry spokesman Zhao Lijian said at a press conference on January 20 that “any attempt to create the false impression of ‘two Chinas’ or ‘one China, one Taiwan'” will meet the strong opposition from all the Chinese people.

He also said the United States should refrain from making “official engagements” with Taiwan in any form, suggesting such a move could send a “wrong signal” to what China sees as “Taiwan independence” separatist forces.

A senior US government official who briefed reporters on Wednesday ahead of Harris’s trip to Honduras said there were no plans for a meeting between the vice presidents.

The official also said that Taiwan has played a “constructive role” in advancing development in Honduras and the rest of the region, and that Washington expects them to “continue to play that constructive role.”

China and Taiwan have been governed separately since they split in 1949 as a result of a civil war. Relations have worsened since independence-leaning Tsai Ing-wen became Taiwan’s president in 2016.

The United States switched diplomatic recognition from Taipei to Beijing in 1979. But it maintains substantive, if unofficial, relations with Taiwan and helps the island maintain self-defense capabilities, for example through arms sales.