After a new rise, the value of soybeans rose 11.4% during January on the Chicago Stock Exchange 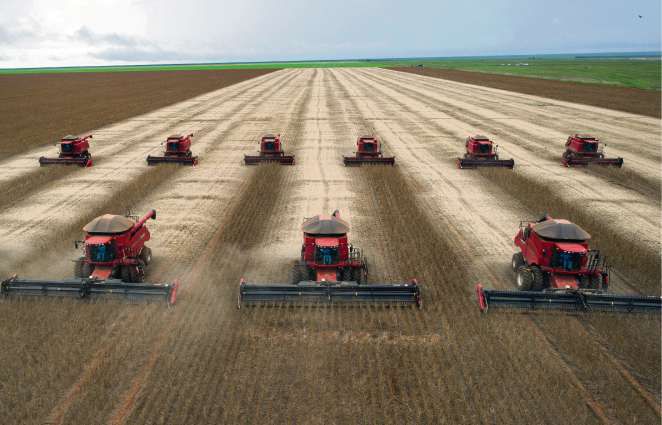 Soybean prices rose today for the fifth consecutive round on the Chicago Stock Exchange and stood at the highest level since the second week of last June. As in the previous days, the forecast of a smaller harvest in South America as a result of the lack of humidity that affected the south of Brazil during a good part of the campaign, as well as large agricultural areas of Argentina and Paraguay, was the main foundation of the bullish trend.

The bullish fuel was renewed today by two new estimates that put the volume of Brazil’s new soybean crop below the 130 million tonne mark. Indeed, the Brazilian subsidiary of the US firm AgResource reduced its projection from 131.04 to 125.04 million tons, while the consultant AgRural did it from 133.40 to 128.50 million tons and thus moved its forecast away from the 145.40 million calculated at the start of the campaign and from the record reached in the 2020/2021 cycle, which according to the National Supply Company (Conab), dependent on the Brazilian Ministry of Agriculture, totaled 137 .32 million tons.

“The situation is as serious as we thought due to the worsening of crop conditions in Rio Grande do Sul, because in January it was very hot and the recent rains were insufficient, much lower than those recorded in Argentina,” he said. to LA NACION from Paraná Daniele Siqueira, AgRural market analyst. In addition to Rio Grande do Sul, the production cuts in the new estimate were concentrated in Paraná, Santa Catarina and Mato Grosso do Sul.

He added that the recent rains and those that will occur in the coming days could still improve the productivity of soybeans planted later, especially in Rio Grande do Sul and Paraná. “But even so, the improvement will not be enough to compensate for the already consolidated losses in the areas that filled grain in December and January in western Paraná and in northwestern Rio Grande do Sul. Both States should have much lower production than last year’s,” he warned.

The novelty of this new work was an adjustment in the harvest expectation in Mato Grosso, the main producer of Brazilian soybeans that, as the opposite of the south, received more rains than necessary. “The excess of rainfall during the development of the crop caused physiological problems in some areas of the north of the State, which resulted in an excessive loss of pods and wilting of the plants., so we reduced the productivity of that region. However, this decline was partially offset by increases in other regions of the state, especially in the west. Our production estimate for Mato Grosso went from 39.90 to 39.70 million tons, but remained above the 36.50 million tons of the previous harvest,” Siqueira explained.

According to the specialist, a larger production in that vital Brazilian state is not ruled out in the next review in March, with the harvest already more advanced. “Other states, such as Goiás or those in the north/northeast, may also have a higher production than is currently estimated. But even so, this would compensate only a small part of the losses in the south of the country”, he pointed out.

Last Friday, the Mato Grossense Institute of Agricultural Economy revealed the progress of the soybean harvest in Mato Grosso over 31.82% of the suitable area, well ahead of the 4.71% at the same time in 2021 and also ahead of the 20.98% average of the last five years.

In addition to the fall in the harvest, operators in Chicago are closely following what may happen to soybean exports from Brazil, the country that leads the field worldwide. In this regard, although AgRural does not make projections on foreign sales, Siqueira indicated that with a production of 128.50 million tons, “Brazilian exports in 2022 will be lower than those of 2021 – they added 86.10 million tons – and would range between 80 and 85 million tons., probably with a good pace of shipments in the first months of the year and low volumes towards the end of the year, when the domestic market tends to pay higher prices.”

In its January report, the United States Department of Agriculture projected Brazilian soybean production at 139 million tons and its exports at 94 million. Your new report will be published on Wednesday of next week.

Today in Chicago, the value of soybean meal was also negotiated on the rise, largely due to the expectation of operators to see greater US exports if the rains are elusive in the coming days with the producing areas of Argentina -it is the largest world supplier of soybean meal and oil – which still have crops capable of boosting their results. The March position of the by-product added US$8.49 and ended the round with an adjustment of 461.75 dollars per ton.

The external increases had a moderate impact on the domestic market, where buyers kept their open offer for soybeans with immediate delivery at the Gran Rosario terminals unchanged at 400 dollars per ton. Said value, equivalent to 41,928 pesos per ton, was again located above the theoretical payment capacity of the exporting oil industry, which was calculated at 41,350 pesos by the Rosario Stock Exchange.

For important batches and for the so-called sustainable soybean, some buyers placed their proposals in a range of between 402 and 405 dollars per ton.

“Unlike what was seen on Friday, when businesses achieved dynamism by touching the $400 mark, there was little movement today. The logic was repeated according to which it is not sold in a market that marks new rises daily. The offer was withdrawn while waiting for the trend in Chicago to intensify and for this to be replicated in the local market,” said a source from the commercial sector.

Regarding soybeans for the next harvest, for deliveries between April and May, the interested parties improved their Friday proposals by 5 dollars, offering 375 dollars per ton for the Gran Rosario; 365 dollars for Bahía Blanca, and 360 dollars for Necochea.

The Matba Rofex slates reflected increases of US$2 and 2.90 on the March and May soybean contracts, whose adjustments resulted in 377 and 379 dollars per ton.