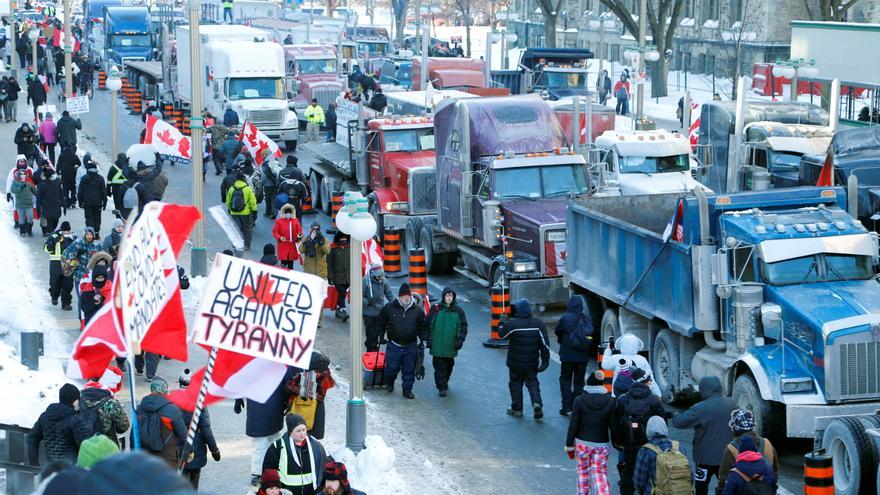 
opponents at sanitary measures against the covid manifested the Sunday for the second day in a row Ottawa while truckers from the “Freedom Convoy” blocked a border route in the west of the country. Canadian security forces were quick to mobilize to try to stabilize the situation. “This afternoon a major police force is still at work, ordering the movement of protesters and trucks,” Ottawa police said in a statement, ending by adding that its troops were “under pressure and fully occupied.”

During the weekend the Canadian capital was stage of a great movement protest started by truckers who were against the obligation to be vaccinated to cross the land border with the United States, the longest in the world. numerous protesters converged on Ottawa to show off their carrier support. In solidarity, the truckers carried out a “complete blockade” of Highway 4 in southern (western) Alberta, near the border, a major road artery for the transportation of goods between both countries.

“The entry point (border post) is currently open, but in reality, nobody can cross it from the north side, unless it is on foot,” Curtis Peters, spokesman for the federal police in Alberta, told AFP, who estimated that at least one hundreds of trucks blocked the highway. In the capital, the police opened “several criminal investigations” for the desecration of national monuments and “threatening, illegal and intimidating” behavior with the police. The mobilization could spread as truckers, some from as far away as British Columbia in the far east of the country, plan to manifest for several days. For his part, the mayor of Ottawa, Jim Watson, said in an interview with local media that it was time for the protesters “to move on to something else” so that Ottawa returns to normal.