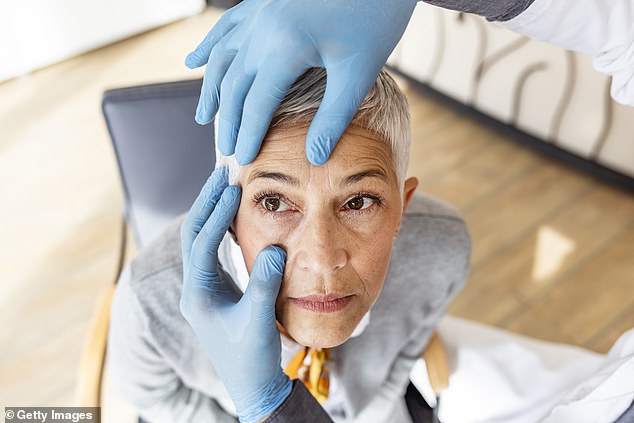 
Imagine if everything around you was clouded by a thick haze of grainy dots, as if you were trying to see the world through a blizzard of TV static.

For people with a little-known neurological condition known as visual snow syndrome, this is common.

Although exact numbers are not known, it is often linked to migraine, a common headache condition, which affects more than ten million people in the UK.

But it can also occur without a migraine, and a recent study suggested that up to two percent of the population may experience the symptoms; yet most doctors don’t even have a clue it exists, experts say.

Patients spend years pushed between specialists and, according to studies, some are even told that they are making it up.

Now, leading neurologists are calling for increased awareness of visual snow syndrome among doctors, so that patients have the opportunity to access the right treatment.

Although exact numbers are not known, so-called visual snow syndrome is often linked to migraine, a common headache condition, which affects more than ten million people in the UK. (archive image)

“For some people, visual snow can be incredibly disabling. Some can’t drive or even work, because looking at a computer screen is impossible,” says Dr Francesca Puledda, a neurologist and visual snow researcher at King’s College London.

“But it is very underdiagnosed because it has only recently been recognized as a condition in the medical community.

Getting a formal diagnosis can make a big difference to people’s mental health, especially since many will have been told they made up their symptoms.

“There are drug treatments that might work for some, and people get a lot of support from patient groups on social media.”

Scientists aren’t yet sure what causes visual snow syndrome, but research suggests it may be a problem with nerve cells in the part of the brain that handles information sent by the eye.

And on the MRIs, you can’t see any obvious problems in the brain. But the problem lies in how the information that patients see is processed, which causes an alteration in vision.’

Isolated case reports of the condition date back to the mid-1990s, when doctors noted that some migraine sufferers also reported a visual phenomenon that affected ‘the entire visual field and usually consisted of small diffuse particles like static TV, snow, rows of ants. , points and rain’.

Migraines are linked to a range of symptoms, from severe headaches, fatigue and nausea to visual aura (seeing flashes and zigzags of light) and photophobia, when bright outdoor or indoor light can be uncomfortable, even painful, to look at. 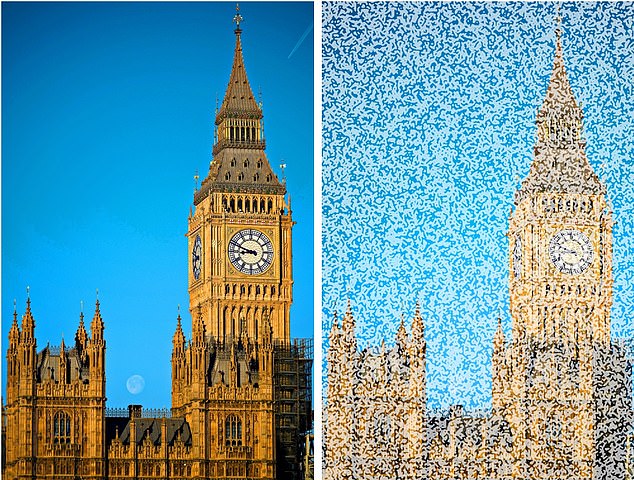 Isolated case reports of the condition date back to the mid-1990s, when doctors noted that some migraine sufferers also reported a visual phenomenon that affected the entire visual field and usually consisted of small, diffuse particles like static of television (demonstrated in a manipulated image). , snow, ant rows, dots and rain’.

Patients who suffered from these visual static symptoms reported that the problem could last long after a migraine attack had ended, and some had been affected for years.

However, it wasn’t until 2019 that it was recognized as visual snow syndrome, a condition in its own right.

While migraine attacks can last for hours or days, Dr. Puledda says, “Visual snow is continuous and affects people all the time.”

In addition to visual static, patients may experience sensitivity to light, night blindness (when vision is especially poor in low-light conditions), and floaters, small dark spots in vision.

To meet diagnostic criteria for visual snow syndrome, patients must frequently experience three of the above symptoms, including visual static.

One man who spent more than 20 years seeking a diagnosis for his visual snow symptoms is Stuart Major, a 56-year-old surveyor from Chester.

The problems started when he was in his early 20s, shortly after he had a bad bout of the flu.

“I started seeing static, like I was watching an old TV,” says the father of one.

“It got even worse at night, when I felt dizzy and saw flashes of light.”

Over the years, her GP, a specialist neurologist and an ophthalmologist were unable to offer an explanation for what she was experiencing.

“Symptoms came and went and weren’t too severe, so I was able to get on with my life,” she admits.

But then, eight years ago, the visual disruption dramatically worsened for no apparent reason.

I have chest pain, what’s wrong?

While chest pain is usually nothing to worry about, there are a number of telltale signs that it could indicate a heart attack.

Immediately call 999 if the pain spreads to your left arm, neck, jaw, or throat.

If the pain comes and goes, see your GP for further investigation as it may be pericarditis (inflammation of the tissue surrounding the heart) or angina, which is chest pain related to problems with the blood supply to the heart.

Chest pain can also be caused by conditions unrelated to the heart, such as indigestion, anxiety, or an infection.

“The visual problems became constant and began to have a significant impact on my quality of life,” says Stuart.

He also developed tinnitus, a constant ringing or noise in the ears, which is common in patients with visual snow syndrome.

“I felt that I couldn’t do my job well and I was worried that I would lose it. Eventually I started withdrawing from the people in my life and got really depressed.’

He later visited the neurologist he had previously seen and presented his findings to him.

“At first he didn’t agree, but after doing his own research, he confirmed that this was what I must be suffering from,” says Stuart.

‘It was such a relief to finally have a name for him. I’ve connected with hundreds of people around the world with the same issue, and it helps to know there are other people out there who understand exactly what I’m going through.’

However, Stuart has had little luck with treatment.

Neurologists can offer medications that are usually given to treat epilepsy and severe migraines, but studies show that they are only effective in a small number of patients.

Unfortunately, none of the four medications Stuart tried relieved his symptoms.

Dr. Puledda says there are other remedies that have been shown in studies to offer some benefit. This includes taking multivitamin tablets or wearing glasses with yellow or blue tinted lenses.

Some studies have suggested that static may be caused by a hormonal imbalance, and taking an antidepressant called amitriptyline, which restores hormonal balance, has been shown to relieve symptoms.

But Dr. Puledda says the value of a correct diagnosis should not be underestimated.

“Patients instantly feel like they can better cope with their symptoms, because they know it’s not their fault and that other people are suffering too.

“The more attention the condition receives, the more we can research it and hopefully find low-cost and effective treatments.”