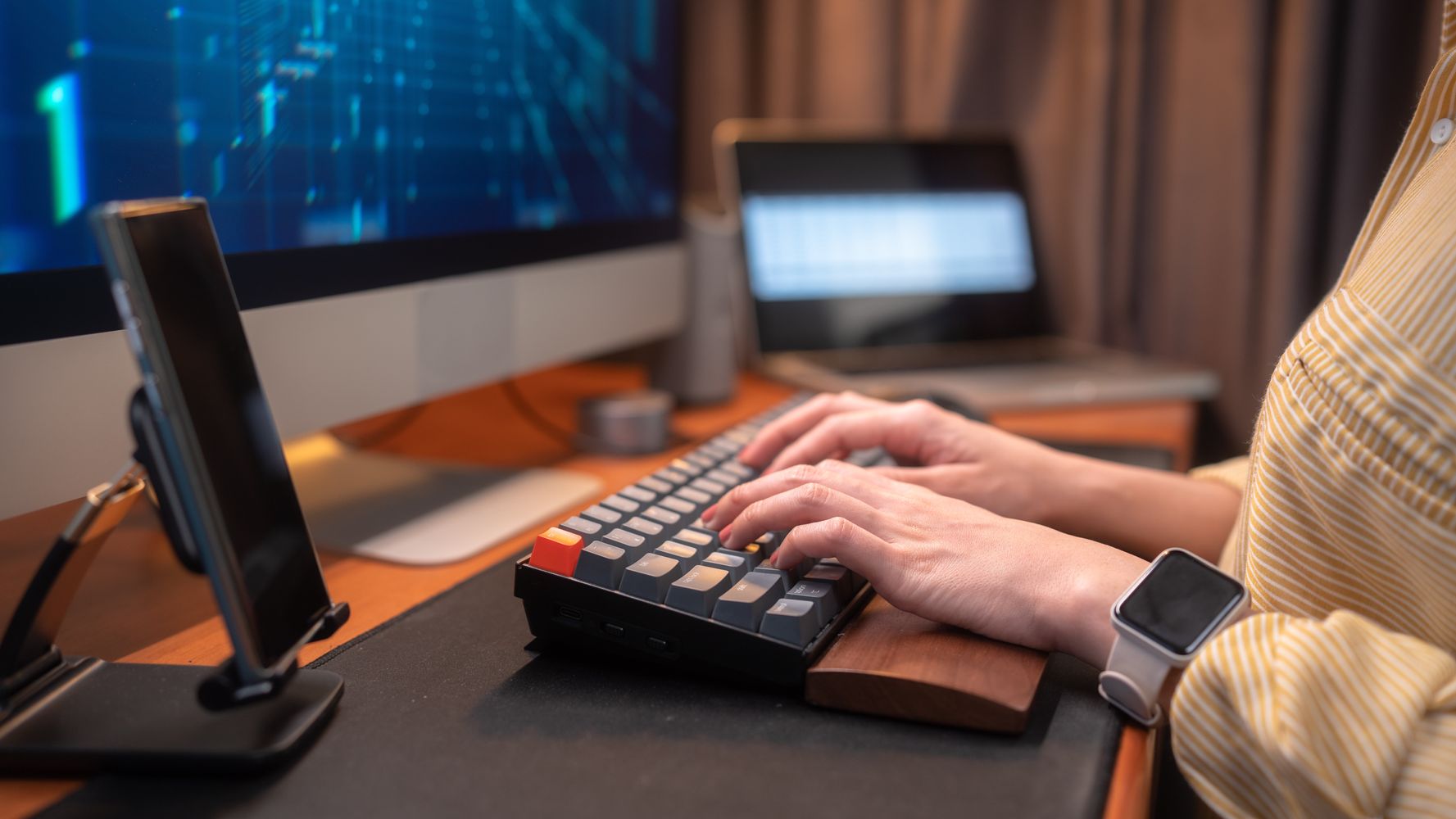 I hid my disability at work for 6 years. When I stopped, my whole life changed.

In 2002 I planned a month-long solo trip to Australia.

On my second day on the trail, while crossing an ankle-deep stream, I slipped and my body did a 180-degree turn. I hit my head and then rolled down the side of a waterfall. The waterfall was about 3 feet high and I landed in a reservoir pool. A German tourist, who happened to be there, dragged me out of the pool.

After the drop, I sat on the river bank, dazed, confused, and very shocked, as my tour leader came down the bank to meet me.

“Do you want medical attention?” asked the twenty-something tour leader.

My mind went back to the health insurance I had booked for the trip. “Helicopter emergency evacuation costs an additional $250,000,” it read.

On the short hike to our base camp, I tripped and bumped into things repeatedly. My clothes were covered in blood and my body had cuts and bruises all over it. I stayed at camp and skipped hiking for the remaining two days. When I finally got back to Sydney, I walked into the hotel lobby and a guest looked at me before loudly announcing, “Can someone get this woman medical attention?”

With my cuts, bruises, disoriented demeanor, and the same muddy and torn trail pants, I can only imagine how alarming I looked.

At this point, I was too shocked to assess what my health insurance would or would not cover. So I refused medical attention and assured the staff that I just needed to rest.

A few days later, I flew back to the United States.

As my bruises and cuts healed, I thought the worst was over. I saw a doctor in New York who ran some tests on me.

“Everything seems clear to me. You just had a bad concussion,” he said.

Before the accident, a typical day in my life included working out at 5 am, working on my corporate marketing job until 10 pm, and then going out for midweek drinks with co-workers, friends, or clients. Somehow, in between all of that, I maintained a social life and freelancing part-time jobs.

A few months after returning from Australia, my co-workers and I were invited on a yacht trip organized by forbes magazine. When the ship left the dock, I knew something was wrong. I felt disoriented, unwell and struggled to carry on a conversation. I sat in one place for the entire trip.

When we returned to the port, I held on to the railing as I took careful, unbalanced steps. “Wow, Jill, it looks like you didn’t hold back from those cocktails,” joked a co-worker.

He hadn’t had a drink. One of my colleagues helped me into a taxi and I assumed he was dizzy.

A few more months passed and I attended a business lunch where something similar happened. I was looking out the restaurant windows watching the curtains flutter in the breeze and the cyclists zoom by. I felt dizzy and like I was underwater. I couldn’t concentrate on what my colleagues were saying. When I tried to go to the bathroom, I struggled to stand up. My body slumped into the chair like a rag doll.

“I think I have to go,” I told him. Strangely, I went back to the office for the rest of the workday. Somehow, I made it back in one piece.

“I don’t know what’s wrong with me, but seriously I’m not fine” I remember thinking. I was scared.

I booked countless doctor appointments. Every time a specialist realized that they didn’t know how to help me, they stopped answering my phone calls. He had no answers. I was determined to figure it out, so I started tracking my triggers: constant motion in my line of sight, flashing lights, loud ambulance sirens, New York City subway brakes screeching to a stop, loud baritone voices, and the list was over. In other words, New York City had been transformed from a bustling wonderland to a total vestibular nightmare.

Even though I was noticing the triggers, I still didn’t have an explanation for regularly appearing drunk, slurring my words, being unable to concentrate, and easily exhausting myself.

Without a diagnosis or even the vocabulary to describe what was happening to me, I felt tremendous shame and guilt. I must have done something wrong. How could I be so dumb? I also feared what my injury would mean for my job security. I felt that everyone around me associated value only with high levels of productivity. I had reason to believe that my value was based on my performance. Who wants someone with an undiagnosed head injury on their team?

It is estimated that 10% of people in the United States have an invisible or non-apparent disability. I would like to think that the corporate culture has more disability awareness and training than it did in the early 2000s. However, research shows there is still a long way to go. According to harvard business Check, most people with non-apparent or invisible disabilities choose not to disclose them to their managers for fear of being seen as less capable and their career progress stalling.

In the years after my injury, my brain’s default settings were: If they know, I will lose opportunities. I will eventually be fired. And if I were to lose my job, the unthinkable would happen: I would lose my employer-sponsored health insurance.

Outside of rent and food, all of my income went to doctors not covered by insurance. Some years, I was paying $50,000 in medical bills (half my salary). It bothered me that I worked just as hard but didn’t have the same financial freedom that my co-workers had. (I was often asked why I didn’t have an apartment yet, and the implication was that I must have spent all my money on shoes.) But without a steady income and health insurance, the diagnosis and treatment plan she desperately wanted would never happen. .

For six years, I didn’t tell anyone at work, not even Human Resources. As the years went on, I occasionally opened up to a boss whom I viewed as an “ally.” Most of the time, they didn’t really listen to me (either my admission was considered inconvenient or it was a “private matter” like having my period).

And so, I stopped talking. I tried to manage the triggers as best I could to hide my disability. But “snorting it” was slowly killing me. My symptoms worsened and my vestibular seizures became longer and more frequent.

My catalyst for changing my circumstances was a horrible appointment with a neurologist.

This doctor informed me that in order to prevent continued deterioration, I needed to avoid all forms of transportation or I would eventually be completely bedridden because, after all, he had “seen this before.”

“Enough! You can’t tell me how my life will unfold.” was my main thought. I decided to find a solution myself, since medical care had failed me.

I read all the books, web forums, and magazines about brain health. Learning about vestibular disorders and accessing the vocabulary to describe my condition was my breakthrough. I realized that it wasn’t all in my head. I learned why certain triggers caused vestibular seizures.

Discovering clinical language allowed me to be able to describe what I was experiencing. He also gave me evidence of triggers to avoid.

At this point, he had advanced to a higher level of leadership in the company. My role with the company, coupled with my in-depth knowledge of brain injuries, allowed me to defend myself.

I was no longer asking permission for my adaptations to be fulfilled. Instead, I would just ask people if they could stop swaying their bodies so we could finish our conversation. Or I would ask them to please stop shaking their leg, which was making the floor and therefore me vibrate. Or stop banging on the conference room table when they wanted to get their point across. I explained clearly that these actions created vibrations that triggered my vestibular disorder. It was not easy for people to understand or remember.

I started setting healthier work boundaries. I unequivocally prioritized my health. When I was working, I was fully present. Eventually, I transitioned into entrepreneurship, because I knew my skill set could be expertly translated into advising and helping people who work in companies with their career strategy, and I could maintain higher quality health on my own. schedule.

Based on my own informal research, many people with disabilities are self-employed because it is often a more predictable environment than working for an employer.

Instead of living in hiding for six years, it might have taken me a year to acknowledge my disability. Or a few months. Instead of living with shame and guilt, perhaps she would have had a more inclusive experience.

I often describe my head injury as a gift. Because of that, I am a better leader. I have increased empathy, I have more compassion, I seek diversity and inclusion in all spaces and I have a completely positive outlook on life. Everything is possible. But it took me decades to realize this truth.

I really hope to live in a society that makes this journey easier for anyone else who is born with, or acquires, an inapparent or invisible disability. All of this starts with a culture of support, openness, and compassion.

Do you have a compelling personal story you’d like to see published? on HuffPost? Find out what we’re looking for here and send us a pitch.