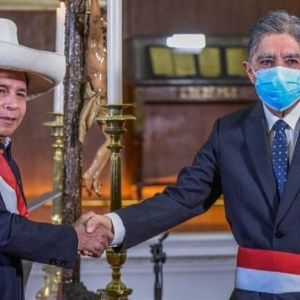 The Peruvian president, Pedro Castillo, accepted this Sunday the resignation of the Minister of the Interior, Avelino Guillén, who confronted the former commander of the National Police (PNP), Javier Gallardo, for discrepancies in security matters.

“I appreciate the services that Guillén has rendered to the nation,” tweeted Castillo, who also deposed Gallardo for this conflict. According to Guillén, his resignation is due to Castillo’s indifference to his request for the dismissal of Gallardo, whom the former minister accused of promoting unfair replacements and promotions within the PNP.

“I cannot accept the dismissal of perfectly trained personnel to remain in office or the promotions that result from bribes of US$25,000,” Guillén argued, stressing that a president must always support the decisions of his ministers.

Castillo argued that the former minister never informed him or the Council of Ministers about such events and denounced that he did not reveal the names of other PNP officials directly involved in them.

#Peru President Pedro Castillo affirmed this Friday that government brigades will clean up the disaster caused by the oil spill in Ventanilla and will sanction the Repsol company responsible for the spill. pic.twitter.com/MYy3bfbqs3

Recently, the Castillo administration declared a state of emergency in Callao and Lima to guarantee citizen security in the face of increased violence and criminal acts in the area. The measure implies that the PNP will maintain control of internal order in the area for at least 45 days, for which it could request the support of the Armed Forces.

Guillén is the third politician to head the Ministry of the Interior in the current administration. Before him, the progressive politicians Juan Carrasco and Luis Barranzuela also assumed this position.

While Carrasco resigned after being questioned for not leaving his post as Lambayeque city prosecutor before becoming minister, Barranzuela left office after it was revealed that he violated COVID-19 restrictions after holding a private party. .