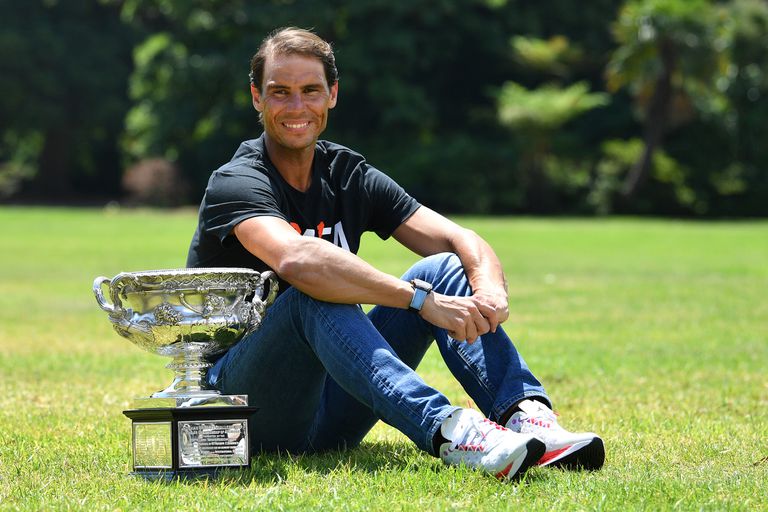 Rafa Nadal, the day after winning his 21st Grand Slam: “ruined”, the future that will depend on the physical and the emotional support for Medvedev


The day after ascending to the altar of altars of tennis, the Spanish Rafael Nadal, 35, could not hide the signs of physical exhaustion -and also emotional, of course- caused by the successful battle of almost five and a half hours against the Russian Daniil Medvedev in the final of the Australian Open which earned him the 21st Grand Slam title, an unprecedented figure for the male circuit.

“I was exhausted and not only in the fifth (set), from before too, but it was the day to not leave anything inside. As they say, it was the day to be down to the last drop and the head responded well. My physique held up and allowed me to fight until the end”, explained the former world number 1, alluding to his epic comeback that allowed him to achieve glory at Melbourne Park (he was down two sets to nil and serving 2-3 and 0 -40 in the third). A few hours after collapsing with emotion on the hard surface of the Rod Laver Arena, he walked with the “Norman Brookes” trophy in the garden of Government House, the official residence of the governor of the state of Victoria, whose capital is Melbourne.

“In the third set the match was almost impossible. Two (sets) down, with the addition that in the second I had opportunities to close it, and even more so knowing that I am not physically prepared. He was saved, I don’t remember the points, but the dynamics of the match changed from there,” Nadal said in Australia, according to the EFE agency. And he added, recalling that only four months ago he had to help himself with the Canadian canes to walk due to a treatment on his battered left foot: “On a personal level it is something incredible, it is the most unexpected victory of my career and one of the most exciting. It’s hard to explain, it’s incredible what I experienced yesterday and seeing that I’m competitive as a player”.

From now on, his future on the circuit will depend on his physical condition. “If I dose myself more, I am no longer a tennis player. You cannot play less than what I have done in the last two years. The calendar depends on the results and the physical condition, and from there we will make decisions. Something very special has been achieved here and I would like to be in Indian Wells, then we will decide if we go to Acapulco based on how the body evolves, ”he announced.

The ATP 500 in Acapulco will begin on February 21. While Indian Wells, the first Masters 1000 of the season, will raise the curtain on March 10.

“I just want to enjoy the moment, you never know if this will be the last time. I’ve barely been able to play for two years and I would love to be able to enjoy tennis more this year. My passion and love for the game remain great”, added the current number 5 in the world, whose great goal from now on will be -without a doubt- to arrive in good condition in Paris to try to win the 14th Musketeers Cup in Roland Garros (from May 22).

The joy for obtaining the 21st Grand Slam, promoted a fun campaign of his tennis academy (Rafa Nadal Academy, which works in Manacor). First of all, they published a photo of a display case full of trophies with a somewhat enigmatic phrase: “Let’s see how we solve this…”.

A few minutes later, they added the video in which a person can be seen moving each of the Cups, to make room in the corner for the prize Nadal just won in Melbourne.

In his farewell to Australia, Nadal wore a shirt that had a game from the design with the 21 and the word Rafa. At the end of the interview he gave, he dedicated a cordial message to Medvedev, who was hurt by the defeat in his fourth Grand Slam final but also very disappointed by the lack of public support. Moreover, the 25-year-old Muscovite confessed that he was no longer “the boy he dreamed of” and questioned his future. In this regard, Nadal was asserted: “I am sure that he will reconsider and will fight for the most important titles. I think his words show the frustration of having lost such a game. I understand him perfectly and I feel sorry for him, it’s difficult to assimilate a defeat of this type”.

And he went further, pondering the other side of Medvedev, a powerful player who seems destined to reach the top of the ranking very soon: “I know Daniil well, we have talked a lot in the locker room and not only does he seem like a great player, but also a great person. I’m sure over time people will appreciate your personality. and charisma, and he will understand how great he is for this sport. I am sure that he will achieve great success in tennis”.