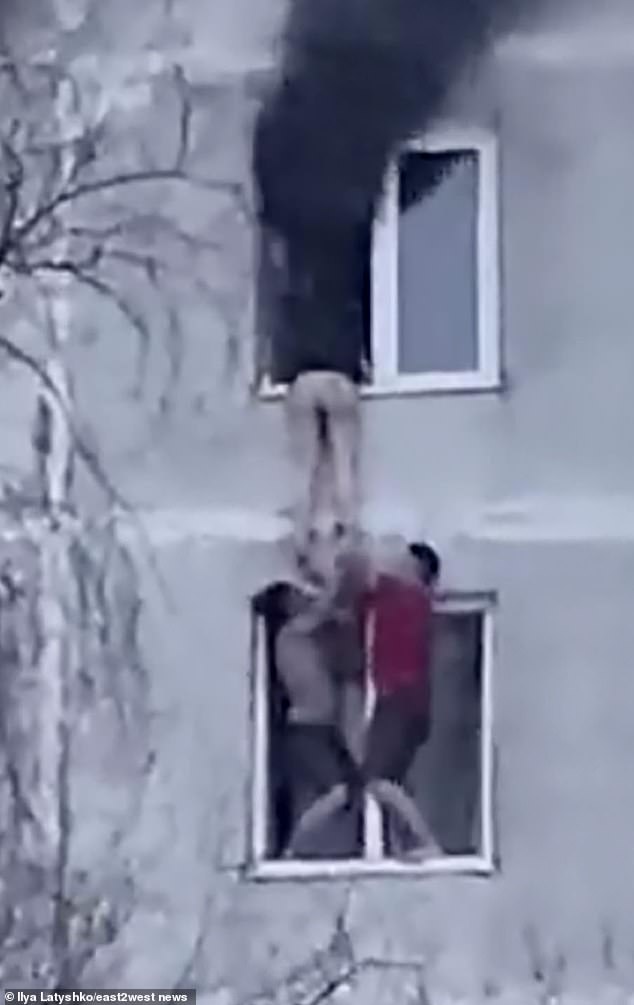 
This is the heartwarming moment a student was miraculously rescued from a burning apartment by climbing out of a window 90 feet (27 m) above the ground.

The footage, recorded on Saturday January 29 in Moscow, shows how 18-year-old Irina Yerpuleva was pushed from a ninth-floor window to the floor below without safety ropes to escape an inferno.

Toxic black smoke can be seen billowing from the burning apartment.

Timur Zakirov, 20, and Adel Akhmetzyanov, 21, rescue a student from a burning ninth-floor flat in Moscow. 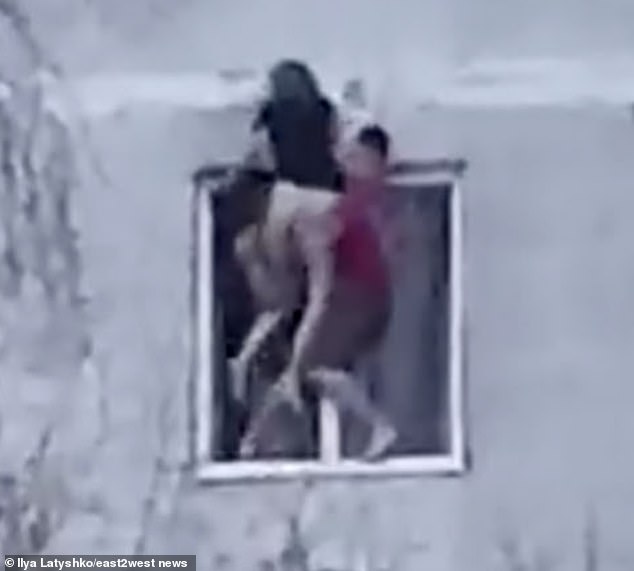 Irina Yerpuleva, 18, climbs out of the window of the eighth-floor apartment

Her student boyfriend, Timur Zakirov, 20, and another friend, Adel Akhmetzyanov, 21, had come downstairs moments earlier and had been helped up through the window by the owner of the apartment.

“I hesitated until Timur started yelling at me, and this brought me to my senses,” said Irina, who said he saved her life.

They instructed me and told me what to do.

They grabbed her legs and pushed her towards the eighth-floor window.

‘At that time, I was in a rather strange state. 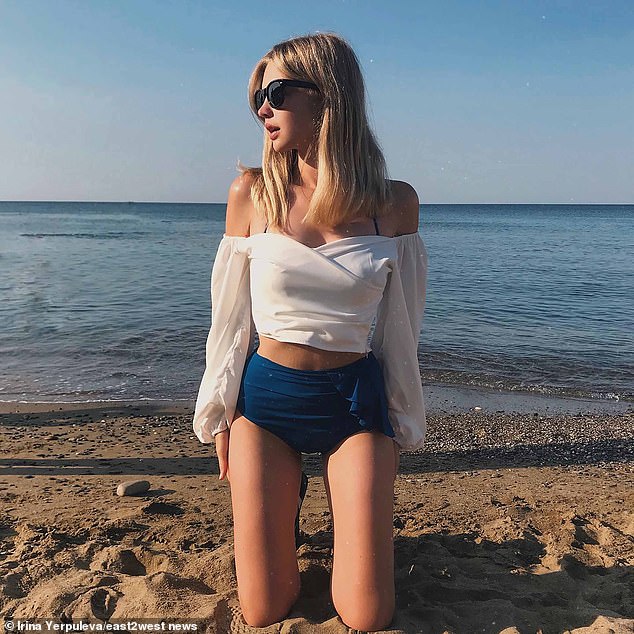 Irina Yerpuleva, 18, said: ‘I did not understand that I was at the height of the ninth floor, and any wrong move could be a fatal mistake for me and I could fall. For me, the fear came later’ 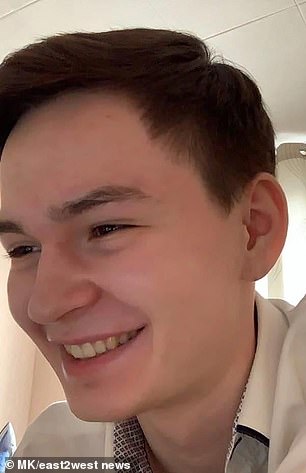 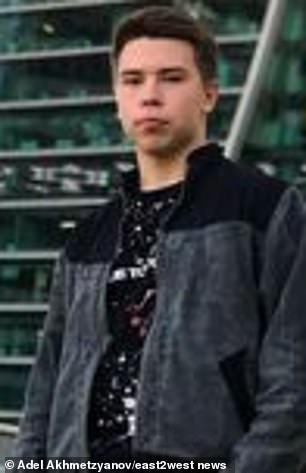 Timur Zakirov (left) and Adel Akhmetzyanov (right) climbed down from the burning ninth floor to escape the conflagration, before helping Irina Yerpuleva accomplish the same feat. 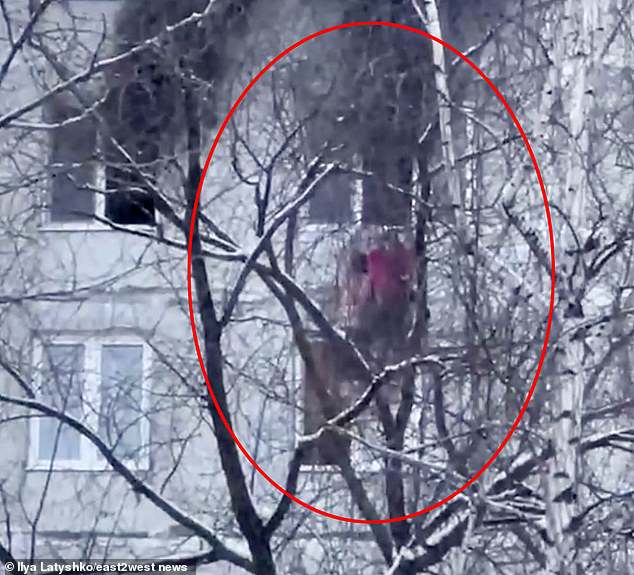 Timur Zakirov and Adel Akhmetzyanov hang above the ground in a desperate attempt to escape the toxic fumes and extreme heat radiating from their ninth-floor apartment.

‘I didn’t understand that I was at the height of the ninth floor, and any wrong move could be a fatal mistake for me, and I might fall down.

‘For me, the fear came later.’

Another video moments earlier showed how Timur and Adel had desperately climbed down from the burning ninth floor, clinging to the window sill.

“They climbed out the window, hung on the widow’s ledge and kicked in the window of the apartment below on the eighth floor,” he said.

Thank God the owner was home. If it wasn’t for him, I can’t imagine what would have happened.

Adel said: ‘Timur was hanging by one arm, the other clinging to the window frame with several fingers.

“I held on tightly to the window sill with my right hand, and with my left I pulled his other hand towards the window frame so he could get up.

‘I thought we’d have to jump, it seemed better than staying there and getting burned.’

The death-defying stunt took place 90 feet above the ground from the 9th floor deck. 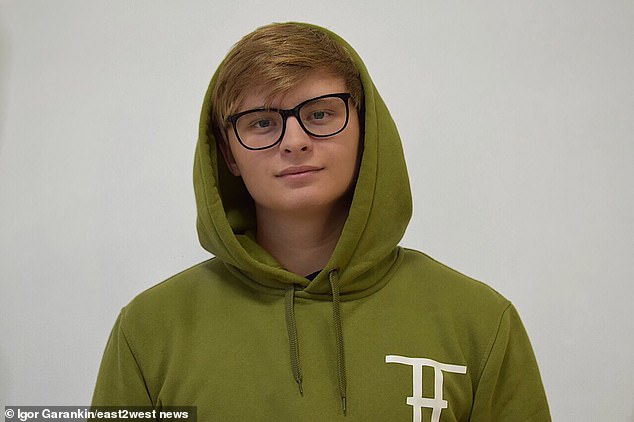 Igor Garankin (pictured) suffered 34 percent burns after escaping through the door before the flames got worse. Adel and Irina are trying to raise money to pay Igor’s expected plastic surgery bills.

Adel suffered minor burns to her hands, but did not require hospital treatment.

Another friend, Igor Garankin, suffered 34 percent burns after escaping out the door before the flames got worse.

Adel and Irina are trying to raise money to pay for planned plastic surgery for Igor’s burns.

The fire is believed to have been caused by an electrical short circuit.