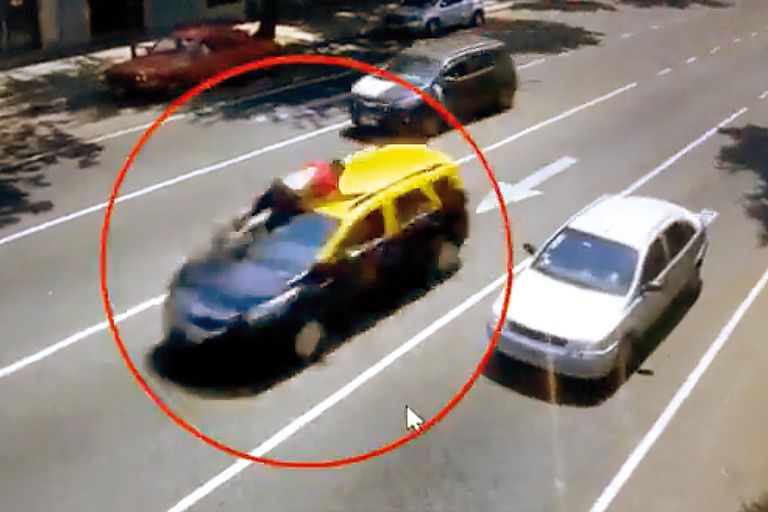 
The judge from Buenos Aires, Martín Del Viso, prosecuted the 21-year-old criminal who On January 15, he stole a taxi and killed the driver, whom he carried hanging from the hood of the vehicle for about 14 blocks at full speed through the Boedo neighborhood, until he collided with another car at a crossroads. He also placed an embargo for 4,500,000 pesos.

The case caused astonishment not only because of the shocking images of the moment in which the victim, Timoteo Tintilay, 61, was thrown several meters away after his taxi, which was driven by Robledo, collided with another car at the intersection. from Garay and Maza avenue. It is that it was known that the delinquent, a month earlier, on December 8, he had been arrested for theft, but was released in an express procedure and spent only 24 hours in a cell.

He managed to get out quickly despite the fact that two months earlier, in September, He had received an “assisted release” within the framework of serving a five-year sentence for robbery, but the judge in charge of that case took three months to notify the measure to the National Registry of Recidivism. This meant that Buenos Aires judge Manuel de Campos, who had to resolve Robledo’s situation due to the attempted theft of a motorcycle, did not have updated information available on the suspect’s background.

According to prosecutor Zoni’s accusation, on January 15 at eleven o’clock in the morning, Tintilay got out of his taxi to shop at a bakery on Avenida Garay and Pichincha. When he was about to enter the premises, he noticed that a man wanted to steal his car. In an attempt to avoid it, he climbed on the hood of the car, but that did not dissuade the criminal, who started at full speed.

He sped along 14 blocks down Garay, while Tintilay screamed and called for help, clinging as best he could to the car, which was speeding down the center lanes of the avenue. At the intersection with Maza, the taxi ran into a blue vehicle that was circulating with the traffic light in its favor. The shock was brutal. The filming of the security dome on that corner showed a shocking image: that of Tintilay that is thrown a dozen meters and falls violently on the road, under the scorching midday sun.

The taxi driver was rushed to Penna Hospital, where he died a few hours later. The driver of the other vehicle suffered serious injuries and is still hospitalized. Robledo, meanwhile, got out of the taxi and tried to escape on foot. On José Mármol street, the thief broke the steering wheel of a parked motorcycle and took it away, but was caught a few blocks away, in Tarija at 4200.

In the prosecution, as reported by the Public Ministry on its news portal fiscales.gob.ar, Judge Del Viso weighed the testimonies of the policemen who intervened in the case and, especially, the statement of a woman who called 911 after seeing the sequence where the victim was on the hood. that witness He identified the accused and described him.

“As the public prosecutor highlighted in his opinion, I understand that the sufficient probability table is met that allows the procedural situation to be aggravated,” Judge Del Viso considered. In addition, he focused on the fact that the accused was limping as a result of a leg injury. Along the same lines, he stressed that traces of blood compatible with that injury were found on the stolen motorcycle.

At the time of qualifying the fact, he agreed with the position of the prosecutor Zoni when considering that it was a homicide on the occasion of robbery, provided for in article 165 of the Penal Code. He stressed that the behavior displayed by the accused was recorded in different security cameras that showed the crossing of at least two red lights, as well as the route traveled with the victim on the hood.

For Judge Del Viso, the magnitude and nature of the danger created by the 21-year-old man “was immense.” “Faced with this succession of risk factors introduced by the accused, it is very difficult to assume that he was not aware of what could happen and that he had not foreseen a harmful outcome for third parties,” he said.

The judge also noted that About Robledo there are two other criminal cases pending.