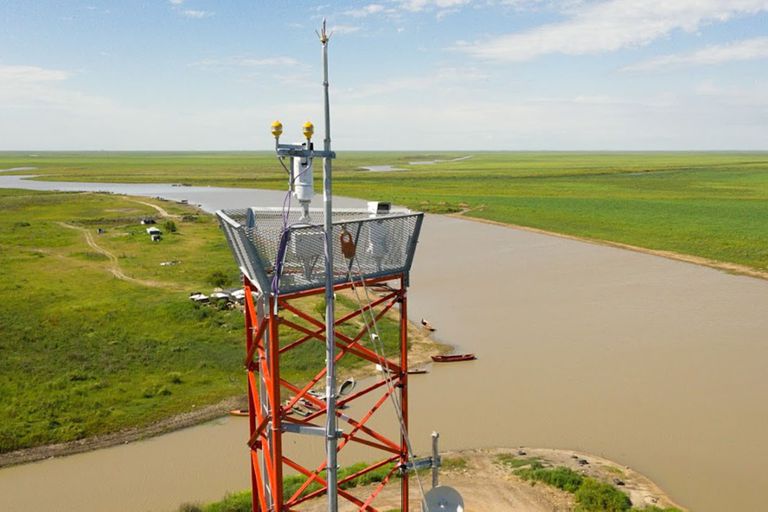 Conservation beacons: how the towers that provide geolocated data on fires in the Delta work


ROSARIO.– With hundreds of thousands of hectares burned during the last two years in delta of the parana river, a persistent drought in much of the country and a global scenario of climate crisis in which the seasons of forest fires will be more and more frequent and intense, from the Ministry of Environment of the Nation today formally presented the network of Conservation Lighthouses, a program that points to the installation of fire and smoke detection towers in different critical areas of the country (the Delta, the Cordoba mountains and Patagonia) to try to improve prevention and thus be able to act more quickly in the face of fire.

The program, whose creation was announced in November 2020 after a fierce series of fires in the delta islands that destroyed some 560,000 hectares (more than a quarter of that territory) that year alone and generated serious smoke pollution problems in Rosario and other large riverside cities, has three stages. So far the first one has been completed: the installation of five towers of control in different places of the Delta, both in Entre Ríos and in Santa Fe.

One of the towers, about 30 meters high, is located at the entrance to the Pre-Delta National Park in Diamante, where yesterday the presentation of the Conservation Lighthouses was held; another, in the camping of the municipality of Victoria; a third, in Puerto Gaboto; the fourth, at the head of the bridge that connects Rosario and Victoria, and the fifth, in the town of Constitution Villa, in the south of Santa Fe. For this first part, the investment was about 119 million pesos. From the Nation they explained that, if the amounts allocated to boats, an emergency operations truck, weather stations, trap cameras, drones and more personnel are added, the approximate total figure amounts to 216 million pesos.

The second stage, as told during the presentation of the program Sergio Federovisky, the secretary of Environmental Control and Monitoring of that ministry (due to the absence at the last moment of the minister of the area, Juan Cabandie), will start with the bidding next week for another five towers to complete the control program in the Middle Delta, will require some 280 million pesos and will cover the areas of Corner of Nogoyá, Gualeguay, Ibicuy and Ceibas in Entre Ríos, as well as Lap of Obligation in the province of Buenos Aires.

Finally, the plan will be extended to other regions of the country affected by forest fires such as Cordoba and Saint Louis (where eight towers will be installed), and the Patagonia, where there will be another nine. In total, according to the Ministry of the Environment, some 1.3 billion pesos will be invested.

During the event organized in the Pre-Delta National Park on the banks of the The Rooftop Creek, near the Paraná, national officials, the governor of Entre Ríos, Gustavo Bordet, and the Minister of the Environment of Santa Fe, Erica GonnetThey explained how the system works. Its pillar is the monitoring towers equipped with two cameras with a range of 30 kilometers: while one rotates permanently and detects smoke and fire both day and night, the other is used to georeference the focus.

Federovisky explained that fire detection requires very few minutes (between 5 and 10) and that the cameras allow a very good geolocation. “The speed of detection allows anticipating decisions,” he said. The information reaches a monitoring Center set up at the ministry’s headquarters, in the Buenos aires city (in a short time there will be another center in the Swamp Deer National Park), from where it is forwarded to the affected provinces.

What happens once the foci are detected? From then on, the responsibility to act more or less quickly corresponds to the provinces, which by constitutional mandate have the power over their natural resources. “The provinces are the ones that exercise control over natural resources and have the initial responsibility for evaluating the resources to incorporate to fight fires. We are going to provide them with the information in real time, but the ones that evaluate and make the decisions are the provinces,” said the official.

Asked about the delay in the implementation of the plan, which was announced more than a year ago, Federovisky considered that “there was no delay”, that “only 14 months ago” that the National Fire Management Service (SNMF) returned to the orbit of the Ministry of the Environment and that this body had been “dismembered” during the previous presidential administration. “We recovered the logic of that plan and last year the service budget was multiplied by seven compared to 2019,” he added.

He also pointed several discursive cannons against the Justice, which he accused of inaction: “The towers allow the fires to be detected in a few minutes, I suppose that now the Justice will be able to better determine who the owners of the fires are.” fields where it burns and who starts the fires.”

Gonnet followed a similar path, for whom there are still “many battles to be fought” and, although the State “is responding”, it is necessary to “demand all sectors equally”.

“There is a deliberate action on the territory, a real anger to change the land use. It is very evident, you have to see it,” added Federovisky, in relation to the legal cases that were opened at both the federal and provincial levels, at the time, to try to establish responsible for the burning.