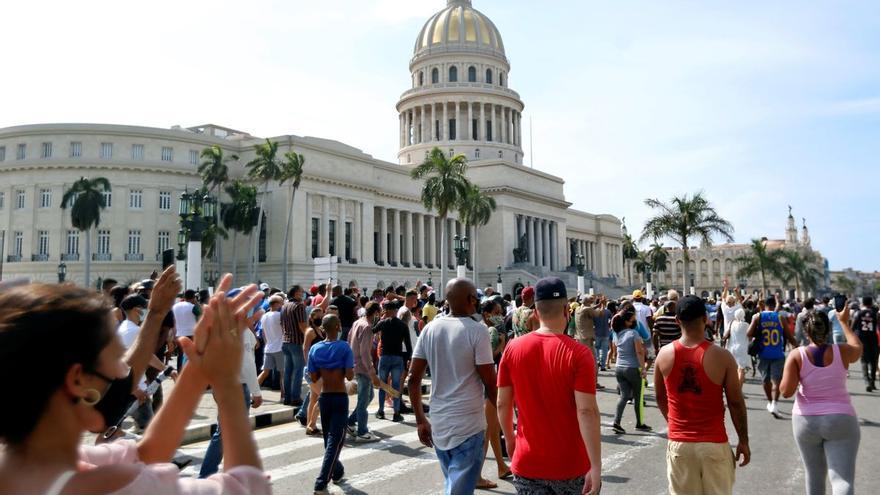 Inflation and the price of the dollar run amok in Cuba


“One euro, one kidney“. The meme that circulates in the social networks it presents an impossible equivalence that would make Cubans laugh if it didn’t touch their pockets so hard. The depreciation of the national currency and the inflationary stampede measure their aspirations these days, despite recent calls from the President Miguel Diaz-Canel Bermudez al Communist Party (CCP) to become the vital instrument of “everything that has to do with prosperity and development of the country, from food to recreation.

The The island’s economy had fallen 11% during the first year of the pandemic. In 2021 it would grow 6%, according to official forecasts. The inflation last year stood at 77%. Other economists have made higher projections. Beyond the disparate figures, the difficulties in accessing the jama (food) and the fula (the dollar) have sharpened in January. There is a minimum basic basket which is made available to people on a monthly basis, at prices without subsidies, as in the past.

Those food Y cleaning articles They evaporate after 10 days. The rest goes out to look for the stores governed by the dollar, the MLC, which are accessed by those who benefit from the remittances, or in the black market, where the price of the North American currency has jumped through the roof. That uncontrolled rise It has brutal effects: some things cost up to 500% more than agreed.

Worse than in the Special Period

In a sense, those with memories believe that the situation is even more adverse than the one experienced during the so-called Special Period in Times of Peace that followed the collapse of the Soviet Union, in 1991. During the first years of that decade, the GDP fell by 35%. The dollar was quoted up to 160 pesos. At that time there was no formal circuit.

From the beginning of 2021, under the monetary order, each dollar supposedly costs 24 pesos. However, that figure quadruples and even quintuples on the street. According to the Bloomberg agency, the Cuban peso was the most depreciated in the world last year: 95.83%. For Granma, the official organ of the PCC, only deals with speculative actions. “There is a trend towards arbitrary and manipulated publication of exchange rates in the media financed from abroad, as well as false information”, he says. What is sought is “to establish the same logic of the so-called Dolar Today in Venezuela, inducing an exchange rate that generates an inflationary stampede, by involving a part of the trade and the private sector, which take these exchange rates as a reference”.

There are various methods for estimating an “equilibrium” exchange rate. In Cuba, the data to calculate it are not made public in an updated manner, but it must be officially estimated. If it were disclosed, the debate on the subject would be more rational

The present inflationary wave started seven years ago, when the authorities put the hand brake at economic reforms that had been approved by the Communist Party in 2011. As the national currency is not enough, the banknotes with the faces of George Washington, Benjamin Franklin y Abraham Lincoln they have become masters and lords of everyday life. The deputy prime minister and head of Economy and Planning, Alejandro Gil Fernández, has just recognized the existence of a “partial dollarization” of activities as one of the negative issues on which “it is necessary to focus attention”.

The expansion of the foreign exchange black market, aggravated in turn by the restrictions that exist to deposit dollars in personal accounts, has led the authorities to design a bill that sanctions up to five year sentences to whom “sells or, by any means, transfers, transfers or acquires currency, check, money order, traveler’s check or any other analogous credit effect denominated in foreign currency, in violation of legal provisions.” The warnings do not seem to have mitigated the informal exchange “It’s been a crazy January!” said the digital magazine The touch.

Those who lose are ordinary citizens. In 2019, the cost of the basic basket represented almost 47% of a salary. Last year 85% of what was received was needed. The forecasts for 2022 are not at all auspicious. “Poverty and inequality in Cuba do not exist in the official discourse, although they have been growing exponentially for some time,” says the sociologist Ivette García Gonzálezportal columnist young cuban. For a long time other specialists had been denouncing a growing pattern of inequality. The changes have gone further than imagined. In a country that last July has gone through a social explosion, he adds, “silence is chosen” in the face of the scourges of the present.