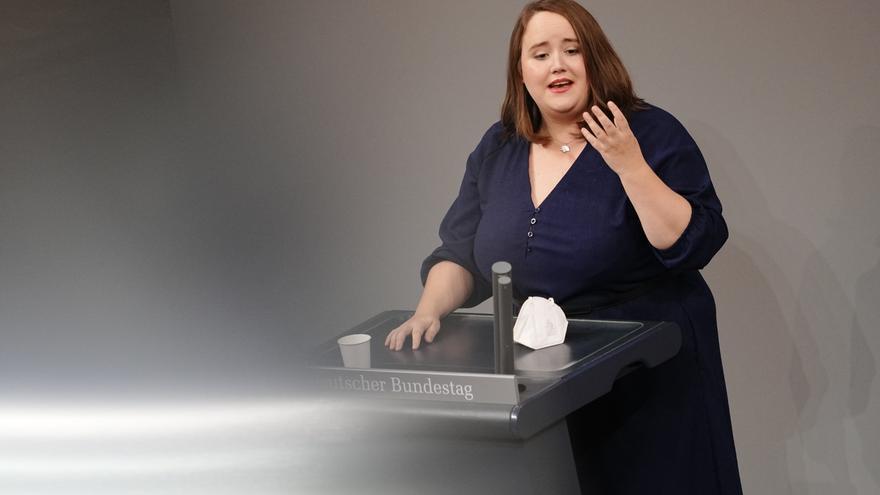 Ricarda Lang, a young woman from the left wing to co-chair the German Greens


“My name is Ricardo Lang, I am 28 years old”, she gets a little more serious and points to her body, “I see myself as I see myself and I am tremendously proud to be able to do politics in a party in which none of that decides on the political task entrusted to me”.

If producing sentences with impact were a political career subject, Ricarda Lang would pass it with ease. The new co-chair of The Greens in Germany left several of those in his candidacy speech in the national congress that the ecoliberals celebrated this weekend. In the election, a mere formality, he obtained 75.93% of the votes.

The other new co-chair is Omid Nouripour (46), born in Tehran, an expert in international politics and a deputy in the Bundestag, the German Parliament, since 2006, when he took the seat vacated by the former Green leader Joschka Fischer.

But the attention over the weekend was monopolized by Lang, who joined Los Verdes 10 years ago, came to lead its youth branch and in 2019 she was already one of the vice presidents of the party at the national level.

Lang grew up with his mother, a social worker. Even without going through great economic hardship, his home is one of many in Germany in which “equal opportunitiessounds like a hollow phrase. “I had a very nice childhood but only because my mother fought for it, she fought for every chance I got.” That was why she went into politics, says Lang. “So that in the future women like my mother, families like mine have it a little easier”.

The new ecologist co-leader belongs to the left wing of the party, focused on the social. Pragmatism in the party is embodied today Annalena Baerbock -current foreign minister- and Robert Habeck -Minister of Economy-, the outgoing duo. Unlike the bloodletting suffered by parties like the conservative Christian Democratic Union (CDU) or the Social Democratic Party (SPD), with them the number of affiliates almost doubled in the last four years to 125,000.

Baerbock is reproached for not having been able to maintain the voting intention figures at the start of the electoral campaign, when environmentalists rubbed their eyes in disbelief when they saw the polls and were excited about the first chancellor to come out of their ranks. All in all, The Greens obtained the best result in history and five ministries, with Baerbock and Habeck in key wallets such as Foreign Affairs and Economy.

Governing is not a sentence

But the discontent aroused in the party base by the concessions made by the Greens during the coalition negotiations could only be a harbinger of future and greater frustrations. Sometimes reaching the Government is overcoming a fence only to later face a wall. However, as Lang said in his speech, “ruling is not a sentence.” That phrase will also remain.

According to EL PERIÓDICO Tobías Schulze, a journalist for the newspaper ‘Die Tageszeitung’ specializing in the Greens, the formation, “including the bases, seems to be prepared to govern and that is what the debates showed” over the weekend, although he believes that “there may be differences between the party and the young climate movement”.

Out of focus, under the blue sky of a rural landscape, fifty chickens walk outdoors. The luckiest of birds is not on the ground eating but in the arms of a radiant Baerbock. The photo was posted over the weekend on Baerbock’s Instagram account as a reminder of his four years leading Los Verdes. In the same account there is another photo, from January 18, there is no laughter but a severe face. Standing to his left, at an appearance in Moscow, he looks seriously and attentively Sergei LavrovRussian Foreign Minister. The times change.

Mediate in that change will be one of the tasks of this new green directive. For the journalist daily newspaper, it is “interesting the question of whether this role of mediator will work effectively in both directions, that is, not only to explain the concessions to the bases, but also whether objections can be formulated from the party upwards”. Schulze believes this will be more likely in the case of Lang, “as a young representative of the on the left“, that in Nouripour, part of the apparatus of the party for two decades.

In the ecological formation, the transit to the top is not a hiking excursion. That Ricarda Lang is there at 28 reveals political talent and thick skin. What is to come overcomes any challenge of the past.