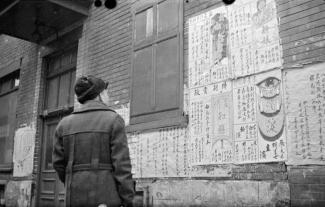 
Montreal’s Chinese communities are celebrating the Lunar New Year, the Year of the Tiger, but this year the future of the city’s historic Chinatown is top of mind.

The neighborhood has always been a mix of cultures.

“The Chinatown story is also really the Montreal settlement story,” Karen Cho told Global News. The filmmaker is documenting the disappearance of Chinatowns across the continent.

‘All good things come to an end’: Montreal’s long-standing Chinese restaurant to close

He is also a member of the Chinatown Task Force that advocates for the area.

The neighborhood is just north of Old Montreal, between Viger Avenue to the south and Rene Levesque Boulevard to the north. Mainly a mix of mostly Chinese restaurants and shops, it has long been an attraction for tourists.

However, the Chinese community did not always live there.

“So many different immigrant groups moved through this area,” Cho noted, naming the Scottish, Irish, French and Jewish communities.

A building at 110-112 de la Gauchetière St. that once housed a synagogue and later a Chinese hospital, still stands.

Another building on the same block, built in 1826, was once the British and Canadian school. Now it’s Wing’s noodle factory.

“This school was the first public school in Montreal,” explained Taika Baillargeon, deputy director of policy for Heritage Montreal. “It was public, it was bilingual, it was mixed.”

The school closed in 1894, just as the first Chinese immigrants began arriving in Montreal, according to records at the Montreal Archives.

They included Cho’s great-grandfather, Woo Yuen Koo, from Guangdong Province in China, who emigrated to British Columbia in 1898.

“It’s also how my grandfather, who was born in Vancouver’s Chinatown, ended up here with his brother, because they couldn’t find work,” he said.

Many Chinese immigrated to BC from China to work in the mines and on the railroad. But some, mostly men, fled east to escape racism and found it here, too, according to Timothy Chan, a Montreal Chinese historian.

He pointed out, for example, that Chinese entrepreneurs who owned laundromats faced discrimination from the authorities.

“Because the city of Montreal charged Chinese laundries a $50 tax,” he explained.

According to information in the Montreal files, that $50 was equivalent to four months of work for a laundry worker. Chan said that some who refused to pay the tax were jailed.

Chan said residents pooled resources to buy properties in the area, creating a sanctuary from racism in their own community.

Cho said the community, over a period of decades, grew into a vibrant neighborhood.

“(In) the 1980s, when there was a lot of influx of people from Hong Kong, it was a very lively neighborhood,” he said.

Just a week before the lunar new year, Quebec announced that the neighborhood would receive heritage status.

While they say the status is a step in the right direction, people like May Chu say they still worry about Chinatown’s future.

“If we don’t conserve physical space,” he argued, “then the Chinese community is basically homeless. Do you know where else we’re going? This is our house and we have to defend it and we have to fight for it.”

She and other advocates are pushing for even more protection.