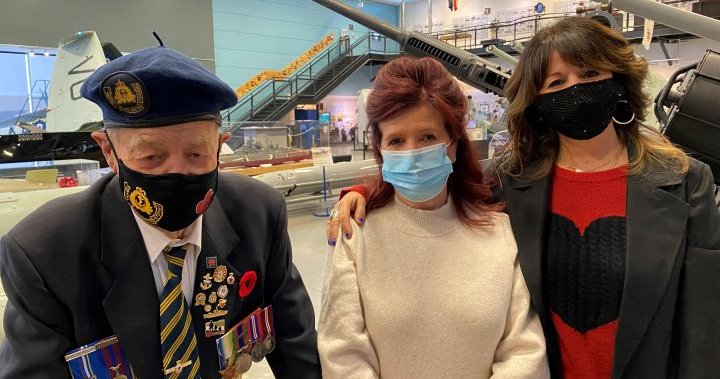 
A Calgary family is inviting people from across the country to help a World War II veteran celebrate a historic birthday.

They hope the support will give him a boost as he faces another tough battle.

MacPhail and her daughters toured the Alberta Naval Museum on Tuesday, part of the Military Museums complex in southwest Calgary.

Curator Brad Froggatt guided the family through exhibits related to the Merchant Marine.

“It was dangerous work,” Froggatt said, “keeping the Allies, and especially England, supplied so they could fight that war.”

MacPhail’s family says his doctors are giving him the best medical care possible.

“They are treating him well,” his daughter Lynda MacLellan said, “and he accepts each day as a new challenge and keeps going.”

MacPhail’s family has come up with something to help him carry on.

He will turn 95 in May and they are inviting people who have known him over the years to send him birthday greetings, in the hope that he can mark the occasion with 95 cards.

“Just show him that there are a lot of people who would love to get in touch, wish him the best for all he’s done,” his daughter Deborah Andoney-Clark said. “Send some sunshine to our father. That would be wonderful.”

It’s an effort welcomed by MacPhail.

The family hopes that people across Canada who have had a connection to MacPhail will send their regards.

“Yes, that would be a great honor,” said MacLellan. Just something to cheer him up.

MacPhail has lived most of his life in Nova Scotia and moved to Calgary two years ago to be near his family.

Family members are asking supporters to send her birthday messages to take care of the Military Museums.

“He’s doing well,” MacLellan said. “We are very proud of him”.