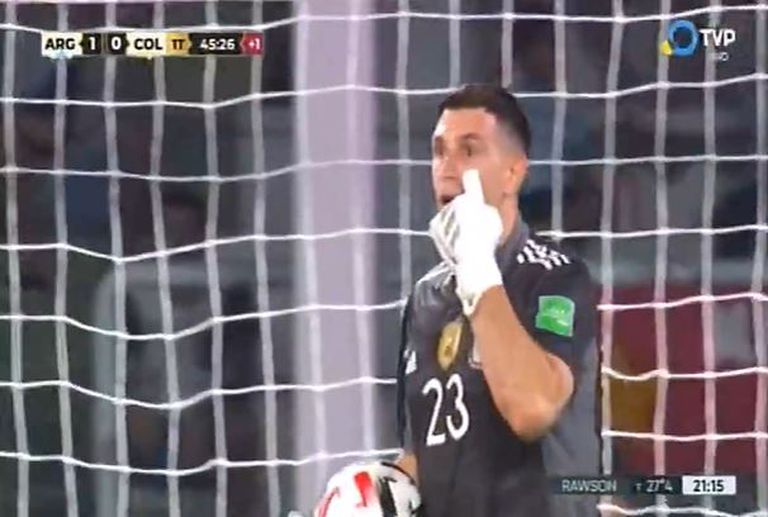 Dibu Martínez: the save against Borja and another hot duel with the Colombians

The pica between Dibu Martínez and the Colombians it doesn’t end. What many expected, happened: and the dialectical duels he had during the last Copa América continued on the Cordoba night.

Once the dangerous play was over, the Argentine did not remain silent and attacked the striker: “Son of a thousand p… he stepped on me!”, was the first reaction of the Argentine goalkeeper. Then, when he was able to make eye contact, he put his index finger to his eye and warned again, “Hey. Your mother’s c… You stepped on me, huh?!” Apparently, the anger between Colombians and Argentines after the semifinal duel of the last Copa América not closed yet and in the play it was demonstrated.

Borja was one of the penalty takers in that Copa América match in which Argentina became champion. The striker converted that penalty (he and Cuadrado were the only ones who could convert him in that definition after the 1-1 draw).

Dibu also tried to distract and intimidate Borja with his provocations from the goal: “Look, I’ll eat you,” he warned him like the rest of his teammates. The attacker, who works for Junior, from Barranquilla, after converting the goal, yelled it in his face. Dibu Martínez, that time, saved penalties from Davinson Sánchez, Yerry Mina and Edwin Cardona.

The day the pica began between Diby Martínez and Colombia

After a lot of searching on offense, Argentina was able to open the scoring. In the duel in which Argentina receives Colombia for the date 16 of the South American qualifiers, Lautaro Martínez scored the partial 1-0 for the Scaloni team. Perfect control in the area and precise definition of the Inter de Italia attacker. co special dedication for the daughter.

When 29 minutes of the first stage were played, the Argentine team was able to win the first goal of the game after being the protagonist so far in the match. The center of Marcos Acuna it was from the left. The ball went over several heads, but it was left to Lautaro Martínez who controlled very well with his left foot and with the same leg he settled it against a post.

I jump on the posters, I celebrate against the tribune and special dedication: “I miss you daughter, I love you,” the author of the goal shouted against the camera. With his conquest, Lautaro reached the goal number 19 with the Argentina shirt. Furthermore, it is the top scorer of the Scaloni era even above Lionel Messi who with the current coach has 15 goals.