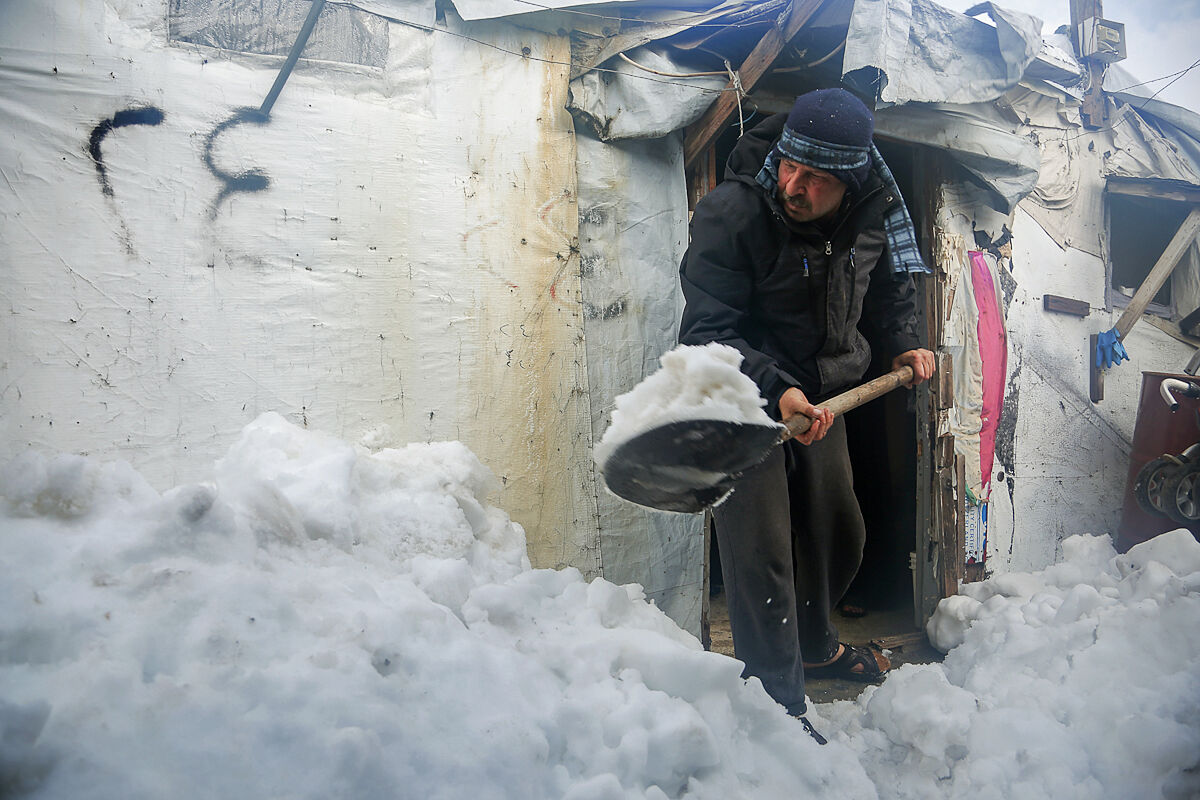 Lebanon shuts down amid cold snap

The look of the correspondent

The shortage of fuel and its high price as a result of the economic collapse of the ‘country of the cedars’ affects the telecommunications network, internet connection, electricity and transportation

The snow has conjured these days against the Lebanese, who cannot resort to heaters due to lack of diesel. Are the heaviest snowfall in the last decade and coincide with the worst economic crisis since the civil war. A crisis whose most present symptom is the shortage of energy and fuel. There is not enough gas to power the snow plows in the midst of the constant storm and that has meant that many mountain roads have been blocked over the weekend. Mobility was already difficult due to high fuel prices, but now it is impossible between the flakes.

The cold wave has isolated Dalal Moussa from his house in the town of Chebaa, located in the southeast of Lebanon, between 1,500-meter mountains, who without fuel or electricity cannot even turn on the stove to warm himself in the nights below zero. “We cannot visit the neighbors to check how we are doing. There is no diesel and if someone has a little, they ration it to try to make it last all winter,” he told the Ap agency.

The cold has cast its icy breath on the harsh winter in which the former ‘Switzerland of the East’ has been plunged since the end of 2019. Gasoline has become a scarce commodity. It already takes the entire minimum monthly salary to fill the tank of the car. And the salary has fallen by 90%, along with the national currency, the pound. It is less than 100 euros, although there are even jobs below that. Medicines and basic products are also hard to find and when they do appear, their prices skyrocket.

The shortage of fuel has dried up the private electric generators, which supply most of the energy to consumers, in the face of the decrepit state of the Lebanese public network. This barely covers one or two hours a day, leaving citizens at the mercy of community generators. But the high costs of the subscription -which already exceeds the minimum wage- and the meager flow of fuel that reaches the country -which, being bankrupt, does not have the foreign currency to import it- means that blackouts are constant.

This already affects the Internet connection, which is chaining several interruptions, in another symptom of the country’s collapse. The national news agency, NNA, and the state-owned Radio Lebanon have suffered a blackout because the Ministry of Information has no fuel for their generators. The country is slowly going back to the days when the internet did not exist, since supply cuts due to lack of fuel also threaten the connection. Without coverage, the Government’s electronic platform dedicated to Covid has had to launch a mechanism to record vaccination appointments without the need for Wi-Fi.

The mobile phone network is also in danger. In Lebanon there is a duopoly with two companies, Alfa and Touch, which returned to the hands of the State in 2020, when the crisis was already more than a reality. As incomes have plummeted, they face huge cost overruns to fuel their generators with diesel. A year ago, fuel represented 7% of spending; for this 2022 the projection is 70%.

While the world is integrating 5G technology, Lebanese telcos can only try to save the day. “We are in crisis mode without being able to look at long-term problems or study general solutions because we are distracted by the issues that concern us. We live from day to day and there is no money,” says the Minister of Telecommunications, Johnny Corm.

And those mundane problems they face are none other than cable theft, which has skyrocketed in recent months. Poverty and hunger strike – 80% of the Lebanese live in misery – and loot electricity towers to resell the cables has become very common in recent months, local media report. “Every day there is a robbery,” Corm told Reuters. “We have reached the point where we have to contact the municipalities to ask them for help because the security forces no longer have the capacity.”

Problems feed off each other. Almost half of the employees of the two mobile phone companies cannot even go to work: their salaries are not enough to pay for gasoline from home to the office. So the signal -already weak- of the Lebanese mobiles also fades little by little, under threat of incommunicado detention.

Raising prices is utopian. Telecommunications services already start from very expensive rates, which even motivated the october revolution 2019, when citizens rose up against political corruption by announcing a rate to tax messaging services such as WhatsApp. The protests led to a lawsuit against the entire system, which sank into bankruptcy in a few weeks, in the worst economic crisis since the civil war.

Until the world Bank has harshly criticized the rulers. In its recent report ‘The great denial’, the institution has pointed out that the “deliberate depression” suffered by the country of the cedars was “orchestrated by the Lebanese elites, “who long ago captured the State and live on its economic rents” . In a harsh rebuke to the political class, the World Bank accuses it of continuing to take advantage of it despite the “severity” of the crisis.

The country is fading little by little as it runs out of fuel, without resources and witnesses the collapse of its institutions. In its desperate search for electricity, the government has signed an agreement with Jordan and Syria to guarantee the watts it needs. But the supply does not arrive immediately. It is ironic that Lebanon turned to Syria, destroyed by a decade of war that still shows no sign of ending. The Damascus government has managed to repair its system but has yet to reconnect its network. The Lebanese electrical system was destroyed during its civil war (1975-1990) and even today it has not been completely rehabilitated, being deficient. Government and political parties, unable to agree, block a sustainable solution.