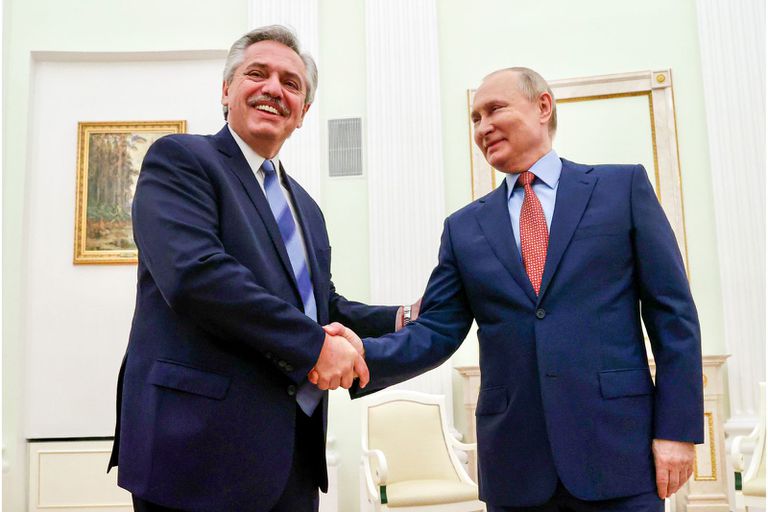 
MOSCOW.- They looked into each other’s eyes and were together for three hours, much longer than expected. And they empathized, something that opened the possibility of broadening, deepening and strengthening -based on the emotional bond created by the vaccine Sputnik V– The bilateral relationship with Russia, an old power six times bigger than Argentina, which continues to play a key role on the international board.

It is a summary of how was the intimacy of the long face-to-face meeting they had today Alberto Fernandez and his Russian pair, Vladimir Putin, according to the version given by the Argentine president after a surely intense day and before leaving for Beijing, the second leg of his tour.

Very relaxed and happy to have been able to personally meet Putin, with whom until now he had only had virtual meetings, Fernández explained in dialogue with THE NATION and Télam the details of his first meeting with a leader who is serving his fourth term in power and is considered the “Russian tsar of the 21st century”.

Aside from being mesmerized by the enormity of the Kremlin Palace’s gilded halls, Doric columns and soaring ceilings, the president was charmed by Putin. And very satisfied with an audience that exceeded expectations and that for Argentina could mean new Russian investments and a renewed strategic cooperation. But in which the issue of the possibility of financing from Special Drawing Rights (SDR) by Russia was not touched upon. Yes, there was talk of the principle of understanding achieved with the International Monetary Fund (IMF). “He told me that the agreement was very important to continue advancing in all these things. He has a very similar opinion to mine about the Fund. He seemed to me to be a very pragmatic guy, above all”, affirmed the President.

“We talked about many commercial issues, about possible satellite technology transfer, about energy issues, the possibility of a train from Vaca Muerta to Bahía Blanca, the commissioning of a factory in Argentina for KMAS, the company that sells the most expensive trucks. largest in the world, potential nuclear power plants for peaceful use. He told me about floating plants in the North Sea and much more”, revealed Fernández, very enthusiastic despite his fatigue, the result of a jetlag that prevented him from sleeping on his only night in Moscow.

“The meeting was great,” the president assured more than once, speaking of his experience in the Kremlin sitting in an armchair in the chancellor’s suite, santiago cafiero.

The face to face, attended only by the interpreters, had five stages. The first was when, at the beginning, they greeted each other and said a few words that were broadcast live. Then Fernández pronounced a phrase that made noise. Just less than a week after the announcement of a difficult pre-agreement with the IMF, he assured that he was “Stubborn” that Argentina would stop having that dependency “so great that it has with the Fund and with the United States.” And he added that the country had to open up “the way to other places and it seems to me that Russia has a very important place”.

asked by THE NATION For that phrase “bomb” Fernández, very serene, explained that it had to do with the logic of a foreign policy based on multilateralism and opening other bridges, other doors. “We really have a dependency with the Fund, we have 44,000 million dollars with just one… The dependency is very large… And the influence of the United States in the Fund is evident. But it is raised within the logic of opening other doors that multilateralism promotes,” he explained. “We do not want to be satellites of anyone, we want to move with autonomy and independence”, he added, highlighting the need to “de-ideologize foreign relations.” That was another topic that he talked about with his Russian counterpart, according to what he delved into. In this context, he revealed that when he told Putin that in the country at one point some opposition sectors and media branded Sputnik V as a communist vaccine, “he laughed.”

The second stage was in another room in which, both sitting around a small table, they talked for an hour on various bilateral and international issues. So, as anticipated THE NATIONFernández confirmed that he raised with Putin the aspiration that the BRICS group, countries with large emerging economies that Russia integrates with Brazil, India, China and South Africa, add Argentina. “Putin told me that he is going to talk about it when he will soon see Bolsonaro and Xi Jinping,” he assured.

The third stage, in which the conversations continued, was the lunch itself, which took place in yet another room. So there was no vodka, but Russian wine -“but very little”-, which accompanied dishes that included first salmon, then something sweet that surprised the President a little, then fish with rice and again something sweet and finally a chocolate dessert .

The fourth stage was the most personal and reflected that there was really harmony between the two presidents, the result of the great affection that in Russia -where tango is already loved Natalia Oreiro-, they have Argentina.

Putin, in effect, took him to visit the office and other offices where he works. At that moment, he showed her the photos of his parents and told him a little about his personal history. “The father was a submariner and was wounded in the battle of Stalingrad and the mother was left for dead… During the siege of Stalingrad each one received 150 grams of bread per day”, said the President.

The fifth and last stage was when the two leaders appeared again, this time in person, before few accredited media in the Kremlin, in the impressive Catherine Hall of the Kremlin. It was the final moment, when they made a short statement, as planned. Marked by a gigantic dome in the Renaissance style, in light blue and gold colors and an impressive wooden parquet floor with various designs, all designed by Italian architects of the 18th century, it was once again affectionate. As he did during the meeting, he publicly acknowledged Fernández, who always defended the quality of Sputnik V and even demanded that the European Union officially recognize it.

During the three hours, in which, of course, the international situation and other issues that went outside the bilateral bond were also discussed, Fernández did not dare to ask Putin the million dollar question. I mean, yes finally russia is going to invade ukraine, an issue that has kept the world and the markets on edge for weeks. “Noooo… On that subject I only limited myself to saying that Argentina advocates the peaceful and diplomatic resolution of any conflict and we agree that the two countries respect the principle of non-intervention in other countries, as we said in the final declaration”, Fernández specified.

The icing on the cake of the lightning visit to Moscow, a frozen city, but more fascinating than ever with snow, was that at the end of the face-to-face Putin gave the President and his entourage – who managed to enter the Palace, but remained waiting in a room and did not even see Putin from afar – that they could visit the famous and monumental Lenin Mausoleum in the emblematic Red Square. Then, in the semi-lit room that exhibits behind glass the impressively intact and incorrupt body of the Russian revolutionary, political theorist, philosopher and communist leader, who has rested there since 1930, a voice from the entourage recalled, with emotion, that “also to Evita wanted to embalm her.”