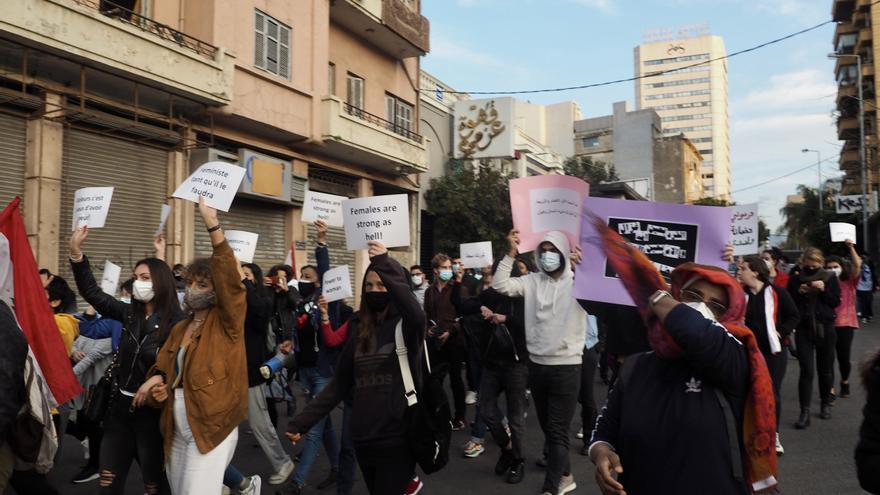 Lebanese but stateless in their own country


A few weeks ago, Amanda Dufour obtained British nationality. “It is the first time that I am a citizen of the country in which I live,” she celebrates with a touch of irony. Amanda’s father is Swiss and her mother is lebanese, but although she lived in Lebanon until she came of age, has never had the nationality of the place that has seen her grow. The Mediterranean country is one of 25 states in the world that deny women the right to pass nationality to their children. “They consider me foreign because my father is a foreigner; this is how they see women, I have always felt marginalized in some way, ”he laments.

Without official data, it is estimated that there some 100,000 stateless children in Lebanon, most born from the union between a Lebanese woman and a foreign man, according to the estimation offered by the ‘My Nationality, My Dignity’ movement. Like Amanda, these people do not have a document that identifies them as Lebanese. According to the law, they are not, with all the serious consequences that this implies. The recent decision of Ministry of Labor of allowing undocumented citizens to work in some sectors that until now were forbidden to them has brought the focus back to this growing population group.

Lebanese women have demanded & waited too long for a nationality law that grants them the same right as men to pass citizenship to their children & spouse. Parliamentary candidates who say they support women *must* support nationality law reforms for #GenderEquality. @Jenny_Donald’s https://t.co/dIXfc1NeK0

“We live in a regime populist and these initiatives will remain in words”, denounces Lina Abou Habib, director of Instituto Asfari for Civil Society and Citizenship at the American University of Beirut. Abou Habib has been campaigning for the right to nationality for Arab women for 20 years and has seen how Algeria, Egypt or Morocco have reformed their laws to amend discrimination. “There are still countries like Lebanon where there is no effort to, at least, alleviate the burden of these women and their families in terms of basic rights”, she stresses.

The children of Lebanese mothers and foreign fathers they face difficulties in access to education and health care, mobility or property. Without nationality, they cannot to work in professions that require membership in a union such as medicine or law. Knowing this scenario since she was a child, Amanda chose to leave her home early. “I left when I was 18, I have no rights in this country”, he tells this newspaper from London. “It’s not just the financial cost but the emotional cost of being treated like foreigners and being victims of racism, ostracism and lack of opportunities,” says Abou Habib.

It was during the colonial period in 1925 when France imposed this law on the territory of Lebanon, similar to the one in force in the metropolis. Almost a century later, the Lebanese political class maintains this law under the argument of the threat of naturalization or resettlement of the thousands of palestinian refugees who arrived in the country in the middle of the last century, and the recently settled Syrians. “In 1925 there were no refugees,” he denounces Claudine Aoun, the president of the National Commission for Lebanese Women. “Its maintenance is related to patriarchal practices and culture and to the confessional system and the laws that we have,” he adds.

Modify the Nationality Law now without any delay or omission#my_rights_are_not_a_bonus #nationality #right #My nationality is a right for me and my family #Equalcitizenship pic.twitter.com/MfFugwJ0mM

the fear of break the demographic balance that sustains the political system has been another of the arguments for not reforming this law. In Lebanon, 18 religious sects coexist, each one meticulously represented in the Constitution and in the institutions. But sectarianism that supports the policy prevents the creation of a unified civil code that replaces the 15 laws on personal status designed by each religious community. This absence leaves women unprotected. Regarding nationality, lebanese men they can pass it on to their children even if they marry foreign women.

Improvements by the feminist movement

“It becomes a way of sanction by patriarchal regimes to women who move away from what is expected of them; somehow, marry outside your tribe it is an act of rebellion that deserves to be sanctioned by withdrawing the right to transmit their nationality”, analyzes Abou Habib. The tireless feminist struggle in the country has achieved some improvements: the children of Lebanese women and foreign men can renew their residence permit every three years and not annually and they can do it for free. They also have access to public education.

“It becomes a form of sanction by patriarchal regimes against women who move away from what is expected of them; somehow, marrying outside your tribe is an act of rebellion that deserves to be sanctioned by withdrawing the right to transmit their nationality”, analyzes Lina Abou Habib.

But there is still a long way to go in Lebanon and in the neighborhood. The country of cedars is located in the position 132 out of 156 in the World Economic Forum’s Global Gender Gap Report. In addition, the Middle East and North Africa region is the area of ​​the world with the highest concentration of discriminatory nationality laws for gender reasons. Half of the 25 countries that deny women the same rights as men to pass on nationality to their children are found here.

The serious political consequences will be felt this year with the legislative elections next May. “These people cannot appear or vote in municipal and parliamentary elections; unable to participate in political life it’s frustrating,” insists Aoun. But although this topic is no longer taboo and has become a problem that is discussed in the media, there are no improvements on the horizon. “All successive governments have been equally horrible in their position on this matter, they have not hesitated to make statements racist or sexist”, recalls Abou Habib.

“There will be no changes with this regime that he only works to support himself”, explains this experienced feminist from her office facing the sea. “It is up to us to remain visible and vocal until this regime is gone,” she concludes. Across the Mediterranean, and across the old continent, Amanda Dufour still considers Lebanon her home.

Even though I kicked her out “it will always be my home”, confess. In her book ‘Local foreigner’, she has reconciled herself to this concept. “We dream that home is where we come from, but the reality is that, too often, that place does not exist,” writes this Swiss-British Lebanese.