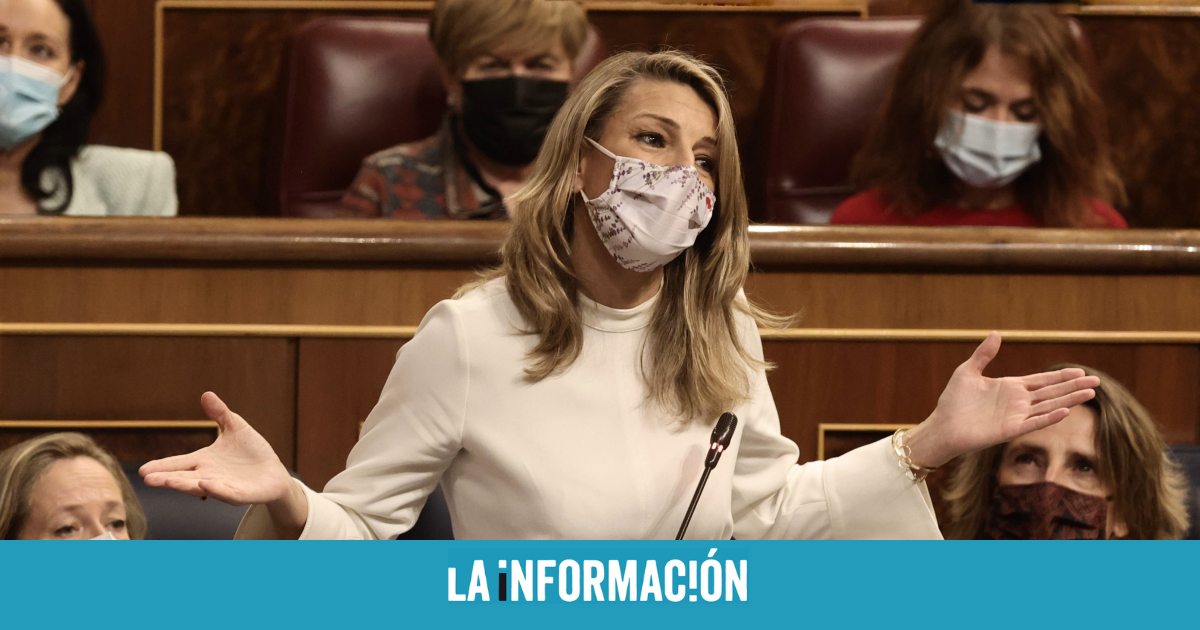 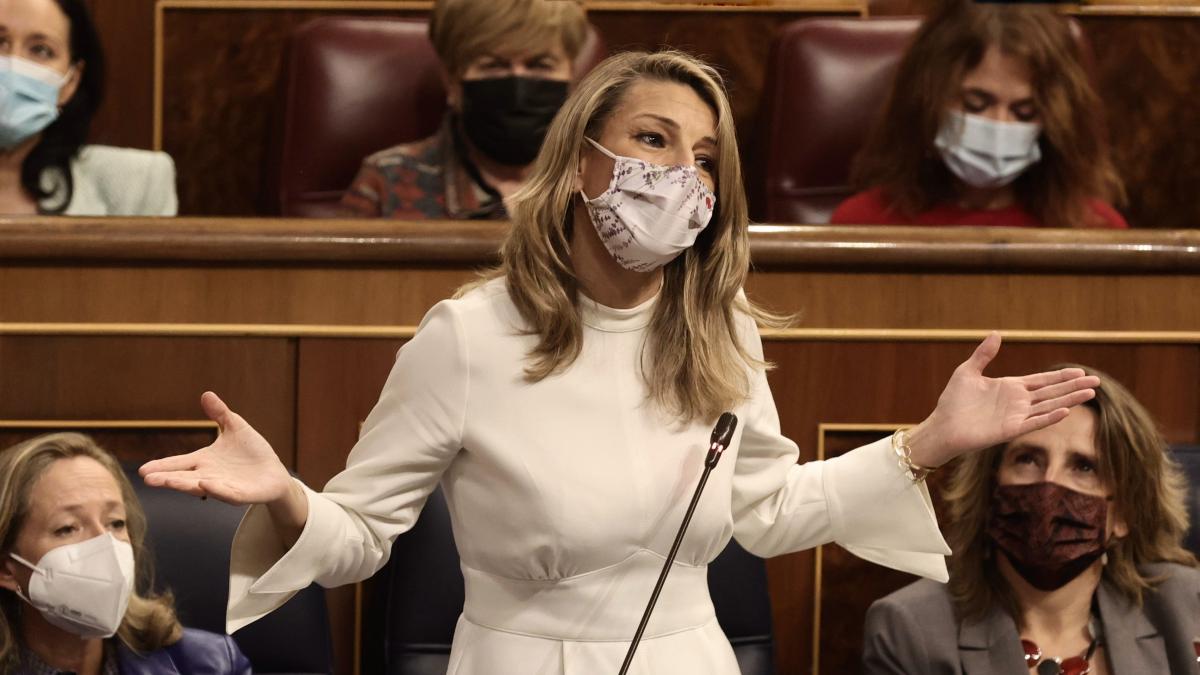 The calendar wanted the balance of unemployment and affiliation for the month of January to see the light on the eve of the vote on the labor reform that takes place this Thursday in the Congress of Deputies. The Second Vice President and Minister of Labor, Yolanda Díaz, rushed to sell the benefits of the royal decree law that has been in force since last December 31 and assured that it has fostered an unprecedented change in the labor market in just one month of validity, alluding to the improvement in the quality of employment due to the strong boost that has occurred in permanent contracts. “The political groups that vote against it are going to have to explain to the workers of this country why on Friday they are going to rise up with fewer rights than they already have today,” warned the vice president.

The data on unemployment and affiliation for January as an argument to justify to those who reject the labor reform that the measures that have been agreed with the employers and the unions are in the right direction and must be validated as they are. Specifically, a figure: the 15% who have reached indefinite contracts on the total number of contracts signed in the month of January, a percentage that exceeds the historical average for this period by more than 50%. “We registered the best month of January in what has to do with the signing of new indefinite contracts in the entire historical series. A milestone in indefinite contracts that shows the effects of Royal Decree Law 32/2021 that contains the new labor legislation” Diaz stated in a tweet.

We registered the best month of January in what has to do with the signing of new indefinite contracts of the entire historical series.

A milestone in permanent contracts that shows the effects of Royal Decree Law 32/2021 that contains the new labor legislation. pic.twitter.com/f0CRoiS5Yd

“Reducing temporary employment and precariousness is a priority for the country and the new labor reform contains key tools to continue advancing on this path. Consolidating permanent contracts is betting on a future of rights and job stability”, concluded the vice president in the network social first thing in the morning. His number two added to this appeal. Secretary of State for Employment, Joaquin Perez Rey, altered the usual script of the press conference to present the balance of unemployment and affiliation to begin by exposing the good data on indefinite contracts and called on the parliamentary groups to carry out a royal decree law that is firmly committed to stability in employment and the fight against the scourge that is precariousness.

But the pressure of the negotiating team that, on behalf of the Government, is desperately trying to attract the vote of the investiture partners (mainly ERC, Bildu and PNV) did not stop there. Pérez Rey also made reference to the fact that the rise in unemployment in January (+17,173 unemployed) represents the best record in the last quarter of a century and is not accidental, but has to do with the measures adopted by the Executive to alleviate the crisis caused by the pandemic and that have been incorporated into the labor reform, such as the subsidized internal flexibility tools to avoid layoffs. The Secretary of State even clarified that unemployment in seasonally adjusted terms – a figure that is not usually highlighted by the Ministry of Labor – was reduced by 75,210 people in the first month of the year.

Who does tend to highlight seasonally adjusted data (which eliminates the ‘calendar effect’ on statistics and favors comparisons) is the Minister of Social Security, who also contributed his grain of sand this Wednesday to the pressure for the validation of the labor reform. José Luis Escrivá spoke of “very positive” data, despite the fact that the average affiliation fell in January by 197,750 contributors, precisely because in seasonally adjusted terms nearly 72,000 jobs were created. He also assured that ERTE workers continue to be reduced, despite the fact that at the end of January there were 2,500 more affected than at the end of 2021, according to data from his own Ministry. And he assured that the employment that has been created in January is of “higher quality”, in reference to permanent contracts, “Already pointing out some effects of the labor reform in force since January 1”.

Escrivá also related the improvement of indefinite contracts with one of the measures that his department introduced in the labor reform and that has been in force since January 1, which is the penalty for ultra-short temporary contracts, although he admitted that it is a measure which will have to be further evaluated in the coming months. More cautious was his number two, the Secretary of State for Social Security, Israel Arroyo, who admitted that it is still “premature” to assess the impact of this overpricing, because observing the data of a single month “is not enough”. “The measure has to be disseminated and those who make decisions have to internalize it; over time it will have a significant effect, but we have not yet carried out an evaluation of whether it has had an effect or not,” Arroyo acknowledged.

Arroyo’s prudence contrasts with the certainty expressed by Pérez Rey when he affirmed that, despite the fact that the companies have a Exemption Law between three and six months to adapt to the new contracting models, the effects of the labor reform are already being clearly felt in the statistics, because in this period of adaptation the norm has already introduced substantial changes that are in force and that they have assumed a shock to temporary hiring and have sent a strong message to companies, which are being anticipated so that permanent contracts become the norm in the Spanish labor market. A statement that is questioned by the Savings Banks Foundation (Funcas), considering that it is still early to know what the impact of the labor reform is on hiring, precisely taking into account the transitional period provided for in the new regulations .

With everything, the Government has used the letter of the historical data of indefinite contracting to try to attract votes on the horn to a reform in which a lot is at stake. If Díaz finally fails to convince the investiture partners in extremis, the royal decree law could go ahead in Congress supported by Ciudadanos and that would complicate the parliamentary validation of the reformist agenda that the Government wants to deploy in the remainder of the legislature. Pedro Sánchez affirmed this Wednesday from Dubai that political stability in Spain is guaranteed. And for the left it would be very difficult to explain, as Yolanda Díaz insists, that on Friday the workers are going to rise up with fewer rights than they have achieved with this reform. No scenario is ruled out, including a last-minute carom in which the usual partners join the yes.