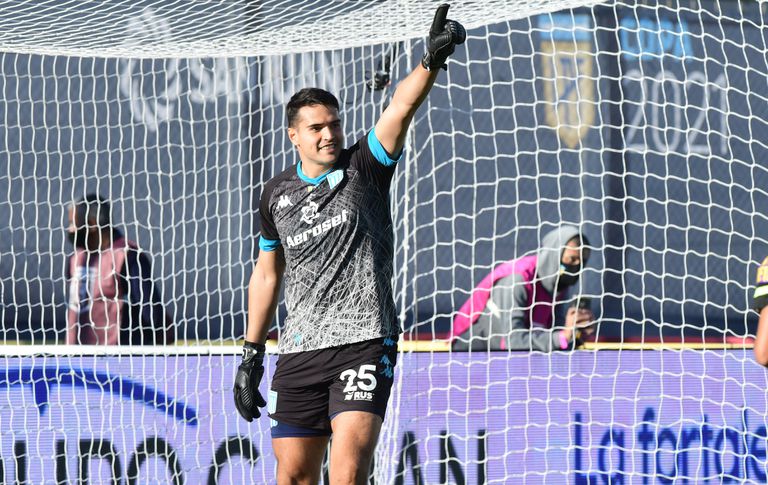 Gastón “Chila” Gómez and his great chance in Racing: from that debut at the age of 15 in the Mar del Plata league to feeling like a starter for an entire tournament


Beyond the five new names that arrived in this pass market (Edwin Cardona, Gabriel Hauche, Facundo Mura, Emiliano Insua and Jonathan Gómez), when Racing takes to the field next Sunday at 5:00 p.m. against Gimnasia, to debut in this 2022, One of the biggest novelties of Fernando Gago’s team will be in the goal. It is not a question of a incorporation or a surprise, but it does not cease to attract attention: with Gabriel Arias recovering from the torn cruciate ligaments in his left knee, Gastón Gómez will be the starting goalkeeper at the beginning of the year.

Al Chila, who will turn 26 next March, has already had to experience many situations in football. The good ones: He debuted in the first of the Mar del Plata league, at Atlético de Mar del Plata, when he was just 15 years old; he played with the U20 youth team in the L’Alcudia tournament in 2014; He had his first chance under the three posts of the academic goal in July 2017 in a Copa Sudamericana match and even dressed as a hero in a penalty shootout against Boca, in the 2021 edition of the League Cup. Also the bad ones: in 2019 he suffered a torn cruciate ligament in his knee, he spent more than three years without participating in an official match and even suffered panic attacks during that period. In the almost five years that have passed since his debut, he has only saved 19 games. They made him 16 goals and 7 times he finished with the fence undefeated.

When he went up to Primera, in 2015, he had Sebastián Saja, Nelson Ibáñez and Juan Musso ahead of him. Nothing less. Then, after Saja’s retirement, Agustín Orion arrived. Since that correct debut in 2017, he saw how the Academy hired five players for the position: Gabriel Arias, Carlos Olses, Javier García, Matías Ibáñez and Matías Tagliamonte. Since mid-2018, Arias is the owner of the bow at the Academy. He is the figure and the captain of the team. On November 26, in the defeat by a landslide against River in the Monumental, the player from Neuquén suffered a torn cruciate ligament in his knee. “We received the bad news of your injury, Gabi. I know what it is to go through that moment and the importance of the support of your colleagues. We are here for you and we hope you recover soon, “wrote the man from Mar del Plata through Instagram. After almost seven years of patience, Gastón Gómez finally got the chance to face a tournament knowing that he will be under the three sticks.

Beyond the importance that Arias has had for Racing for the past three seasons, it is known that with Gómez the academic arc will be well covered. In these pre-season friendlies, Chiqui (as he is also nicknamed from the Inferiores for his imposing physique) showed confidence with some saves. And also his ductility to play with his feet, something that coach Fernando Gago asks of him, although sometimes his overconfidence played a trick on him in these preseason tests. It’s that the number 25 reached the goal almost by chance, that’s why he has good handling of the ball. “In Atlético one day the goalkeeper was missing and I was a bit the wild card of the team. Some were missing and they put me whatever. The coach asked me if I wanted to cut short, I said yes and I didn’t leave the goal anymore, ”he once told the Mar del Plata newspaper La Capital.

In addition to his good conditions under the three posts, another of Gómez’s main characteristics that have been recognized by the club since he arrived at Avellaneda is his personality. Beyond his physical resemblance, his nickname “Chila” is also born from there, in honor of José Luis Félix Chilavert, the historical archer of Vélez. In 2017, the Paraguayan did not hesitate to give him his blessing: “Gómez is going to be one of the best Argentine goalkeepers of the future.” Gómez and Chilavert even spoke on the phone a few times: according to the Racing goalkeeper himself, the former captain of the Paraguayan team asked for his number and contacted him to tell him the same thing he had declared: that he had many conditions and that he was going to be a great archer

Part of that winning mentality was on display when he had his dream afternoon in the First Division. In the semifinal of the League Cup, after a boring 0-0 in San Juan, he was the hero in the penalty shootout against Boca: After Carlos Tevez’s decision, he stopped the shot at Diego “Pulpo” González. He had gotten the chance because Arias was affected by the Chilean team. “To my companions, during the week, I told them that it was going to happen to us like this. I had all the faith in the world that we were going to go through and I had a feeling it was going to be on penalties. It finally happened”, said the goalkeeper after the end of the game. They were his happiest days in football: even the images of his family went viral, all dressed in different editions of the Academy’s number 25 sweatshirt, celebrating each of his saves.

That was the prize for patience and perseverance, because Chila responded every time it was her turn in these five years, even in other brave situations such as a match against Corinthians, for the South American Cup. Each preseason for Gómez used to be the time to analyze if the time had come to go to another First Division or National B team to add filming. Until now, his dream of leaving a mark in Racing, the club where he landed when he arrived from Mar del Plata, always weighed more heavily. When your document is about to mark 26 years finally the time has come: in this championship Gastón Gómez will be Racing’s goalkeeper.