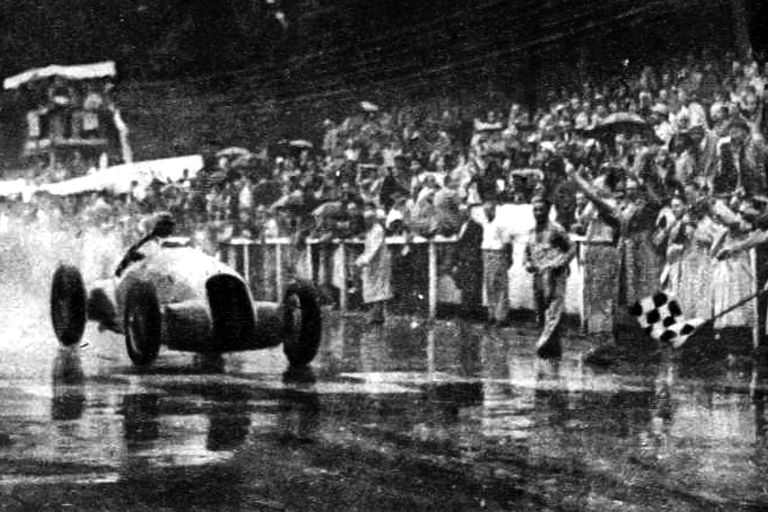 Palermo, 1949: when Argentine motor racing came of age with the mastery of Oscar Gálvez


In 1953, Argentina received Formula 1 for the first time. The success of Alberto Ascari, with Ferrari, escorted by Luigi Villoresi and José Froilán González, was the first of the twenty chapters that the big circus retraced his steps in the Buenos Aires racetrack. Three years, 11 months and 12 days before, the Palermo street circuit was the scene of a historic day for national motorsports: for the first time a Creole driver defeated European talents. That February 6, 1949 was a day of glory: the victory of Oscar Alfredo Galvez provoked public delirium, a crowd that resisted stoically under torrential rain to celebrate on that sunless Sunday due to the weather. Finally, after several attempts, the students outperformed the teachers.

The international motor racing seasons began in 1947 and were developed with cars that were the mechanics for the start of F.1 in 1950. The street circuits, the scenes of the battles between national and foreign drivers, who taught technique, cunning and courage on the Retiro and Palermo routes, but also in Mar del Plata and Rosario. Precarious tracks, with very low safety standards, with bales of grass that served as containment barriers. Death mourned the first of the four dates in 1949, when the Frenchman Jean-Pierre Wimille lost his way in a curve and the Simca-Gordini, which was turning at 140km/h, overturned after hitting the bales. The serious injuries caused the death of whom the chronicles pointed out as “the best runner in Europe”; A year earlier, the Parisian, a member of the French resistance during World War II, had imposed himself on Rosario.

Tourism Road Champion in 1947 and 1948 with Ford, Oscar Gálvez had bought an Alfa Romeo 8C-308 before winning the first TC crown.: eight-cylinder in-line engine from 1935 and with a chassis that belonged to a 308 from 1938. The car weighed 870 kilos and the power of the impeller was 330 CV at 5400 RPM, which allowed it to reach a speed of 275 km/h maximum. The machine was owned by Ralo De Luca and the Harrier he paid 65 thousand pesos, a fortune for the time; a Ford, new, was worth $3500. “I bought the Alfa with 40 thousand pesos and the rest to pay in documents”, he confided to Corsa magazine, in an interview in 1980.

The list of Argentine pilots of hierarchy was generous, Oscar Gálvez was joined by his brother Juan and the presence of Juan Manuel Fangio and José Froilán González offered a poker of aces to present battle to foreigners, who came to defend the flags of Alfa Romeo, Maserati and Ferrari. The Creoles had the support of the government of Juan Domingo Perón, which provided part of the budget and was also contributed to cover the cost of international Grand Prix dates.

Gálvez’s Alfa Romeo used methanol: every 100 liters of alcohol, one liter of castor oil to lubricate the compressors. The brakes were bell-shaped and you had to use them as little as possible, he remembered the Harrier: “You had to brake completely, because if you brake a lot they would turn purple and stop working”. The car was painted blue and yellow and had Quilmes beer advertising on the trunk. “We settled on 4,000 or 5,000 pesos per race: sometimes they gave me a little more and others, a little less, but the Monday after each race I passed and I had the check ready to cash.”

A week before the first race of 1949 had been held in Buenos Aires and Gálvez was the protagonist -he finished third, behind Ascari and Villoresi-, although in the workshop they discovered a fault that could dynamit the claims on the following date: the oil rose to the first cylinder. The engine was disassembled and the pilot, like Ricardo Carú, worked all week to solve the problem.. The Saturday before the competition, the Harrier He did not approach the Parque Tres de Febrero track: going to the qualifying test with a hard engine and demanding it would be an unforgivable mistake. The idea was to absent himself and soften him on the straights of San Isidro.

The rivals also suffered setbacks. Farina had ordered spare parts that never arrived for the Ferrari; Villoresi did not exhibit the smile of the previous day, when he set the circuit record, at an average of 116.604 km/h. The lap was a perfect demonstration of what he had not been able to do a week before, when in an attempt to overtake Ascari He drew a spin and squandered the chance of victory… Fangio wasn’t happy either.: The tires could give you problems, depending on whether the floor was dry or wet. Faced with so much mechanical uncertainty, the list of candidates for victory was as wide as it was doubtful.

Ascari took the lead at the start, with Villoresi as escort; Fangio pushed and Gálvez appeared fourth, although at a distance from the head of the race. The rain slowed down the test: the speed difference between the first and second dates was 10 kilometers. a top of the crooked, to avoid a collision with Villoresi, who tried a strange maneuver due to the weather conditions, led to a blow to the rear: the injury reduced the performance of the Maserati. The delay of the Balcarceño and the abandonment of Tooth, due to a broken valve, reduced the battle to three names: the Italians Ascari and Farina, and the Harrier.

For Gálvez it was the first race in wet track conditions with the Alfa Romeo. It was the first time he had used the celluloid mask, the one that fogged up with his own breath. Carú’s idea of ​​cutting it was forgotten, between the tasks to get the car ready for the start. “I thought that in the rain they would have much more advantage over me, but when I saw that I was close… When Ascari was left as the only rival, I outlined the plan to attack in the final laps. play me whole”, he confessed to the magazine El Gráfico.

“Fangio opened up to one side so that he wouldn’t lose tenths; [Eitel] Cantoni and [Adriano] Malusardi behaved magnificently, as if they shared my hopes of victory at that moment. Even Prince Bira, at one point, signaled me with his hand to overtake him… The car was firm and I was more trained, looser on the wet floor, “said the Harrier. The five-second gap narrowed until the Alfa Romeo was trailing behind the Maserati; A signal from the Italian caused the public to explode: the exhaust pipe came loose and Gálvez overtook him. The handkerchiefs greeted the passage of the Argentine. The race was won.

To the Alfa Romeo with which Gálvez beat the European drivers, the Harrier he sold it for 85 thousand pesos to the Argentine Automobile Club. What he did not know was that the mythical car would be for Fangio. In 1999, a collector bid $2,800,000 for the machine that is exhibited in the Balcarce museum and that was declared a historical asset. The reason for the generous sum was that only four units of that model were manufactured. “I never wanted to sell it, but I needed the money and people from the club came to buy it from me. They bought it with a check and then they gave it to Juan”, Gálvez reinforced the story. By then, Argentine motorsport had come of age thanks to his unforgettable victory.