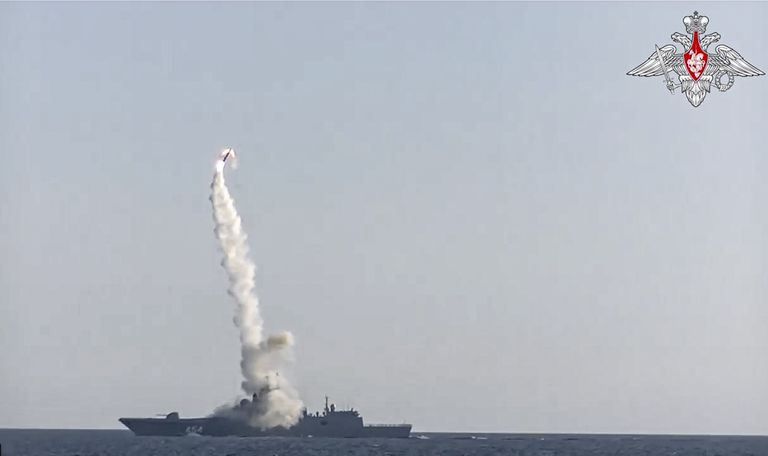 The race for supersonic arsenals: the fierce competition between Russia, China and the United States


PARIS.– With Ukraine transformed into the epicenter of the world, the geopolitical arm wrestling that is currently taking place on the borders of the Donbas constitutes for Vladimir Putin the opportunity to install a new international order, more favorable to Moscow and the illiberal axis. To achieve this, he is determined to do everything: in particular to develop his armed forces to the limit of the imaginable. But the head of the Kremlin is not the only one.

While the world of astronomy celebrated the launch of the James-Webb telescope on December 25, an instrument long awaited for ten years to learn a little more about the birth of the universe, Moscow received Christmas by testing various hypersonic missiles.

“This morning a salvo of shots from the Zircón hypersonic system was successfully carried out”, announced Russian television. “It is a great event for our country and a significant stage in strengthening Russia’s security and defense capabilities,” a senior military official congratulated without giving details.

In the rest of the world, weapons specialists recognized that, for the first time, Putin was not content with announcing “a shot” of his new missile, but “a salvo”, which seemed to confirm that Moscow had entered a new chapter of its vertiginous rearmament process.

According to experts, in ten years the Russian armed forces received a thousand additional combat aircraft and T-72B3 tanks launching missiles of unmatched range. Many of these super-sophisticated conventional weapons systems are being deployed around Ukraine.. Now adding to that arsenal are those nuclear-tipped hypersonic missiles, which could circumnavigate the globe and bypass the US anti-missile shield with disconcerting ease.

“When Vladimir Putin introduced them to the Russian military high command, he told them without a gesture on his face: ‘Now you will listen to me’”, asegura the sovietologist Françoise Thom.

Zircon, which would fly at eight times the speed of sound, that is, at 9,878 km/h, is due to equip Russian warships and submarines starting this year. Other tests were carried out in the Russian Arctic, especially from the Amiral Gorchkov frigate and from a submerged nuclear submarine.

In the midst of a period of growing tensions between great powers, the Russian “salvo” was the final touch of a year (2021) marked by a vindicated return to the arms race. In that time, there was no month in which the Russians, Chinese or Americans have not announced test firings of new “invincible” weapons such as Zircon.

Putin had already shown his intentions in 2018, when he announced the launch of half a dozen futuristic weapons programs, mostly hypersonic, with the aim of “providing Russia with the best defense system in the world” and dodging the anti-missile systems of the United States. United.

In December 2019, Moscow thus presented Vanguard, a new generation of hypersonic missiles capable of flying at Match 27, changing orientation and altitude with the ease of lightning. Powered by an intercontinental missile RS-18/SS-19, Avangard “glides” high in the atmosphere, an ability that allows it to acquire a potentially less predictable trajectory than a traditional missile. And in case the international community still had doubts about its military capabilities, the Kremlin proceeded with a show of force by pulverizing one of its old satellites in November, at the risk of endangering the International Space Station (ISS) and causing a cloud of fragments.

But Washington’s surprise did not come from Moscow, but from Beijing. On October 27, the chief of staff of the United States armed forces, General Mark Milley, publicly confirmed a hypersonic missile test conducted by China two months earlier. The shot would have circled the globe, flying out of range of US anti-missile systems in the northern hemisphere, before crashing near its target in the China Sea. Commenting on the episode, Milley called it a “Sputnik moment”, referring to Russia’s breakthrough in 1957 in its space race. Beijing denied testing a new weapons system, only confirming the launch of “a routine spacecraft.”

Unsettled by all those orbital shots hampering their ability to intercept ballistic missiles, the Pentagon calls for higher budgets for its hypersonic weapons programs. The same president of the defense giant Raytheon recently confirmed a technological backwardness of the United States in relation to China, which he estimated to be of the order of five years.

“Everyone invests in hyperspeed, but the ones who really feel behind are the Americans”, acknowledge sources from the French Ministry of Defense. According to them, in this field Russia is in “pole position”, closely followed by China.

In any case, all powers dream of hypervelocity systems, that fly at more than mach 5 and can be maneuverable, in order to deceive enemy lines.

“The goal is the unpredictable trajectory”, they acknowledge in ArianeGroup, builder of the French M51 ballistic missiles, warning, however, about the mirages of unbridled propaganda.

“Speaking of hypersonic missiles responds more to military propaganda than to a technological breakthrough, since some rockets, for example Ariane, already exceed 25 times the speed of sound,” they say in ArianneGroup.

In this race to the absolute hypersonic weapon, two technological paths are explored: superstatoreactors and hypersonic gliders. In the first case, it is a question of developing a maneuverable missile that flies sufficiently low thanks to increasingly powerful statoreactors, capable of reaching speeds of mach 10. In the other, an unpropelled glider is carried by a rocket and released at high altitude to glide at high speed around the globe bouncing off atmospheric layers between 50 and 100 kilometers in altitude before landing on its target.

“The challenges are enormous”, recognize the specialists.

Who really controls these terrifying and revolutionary technologies? In that game of poker, many statements are unverifiable. Like when Russia claims its Avangard glider flies at mach 27 (absolutely unstoppable). But for how long is it capable of flying at that speed: two minutes, five, more?

“No one tells the truth and everyone tries to impress the other,” they say at ArianneGroup.

One thing is certain: the race to hyperspeed will cost dearly. The Pentagon estimated it at $106 billion for its army and $96 billion for the navy, with a first round of funding of $28.5 billion over the next few years to catch up.

Faced with such technological threats, with humanity once again approaching the brink of the abyss, there remains hope that the great powers will be able to define a new global agreement on arms control, and decide to stop betting on the terrifying game of possible hecatomb .