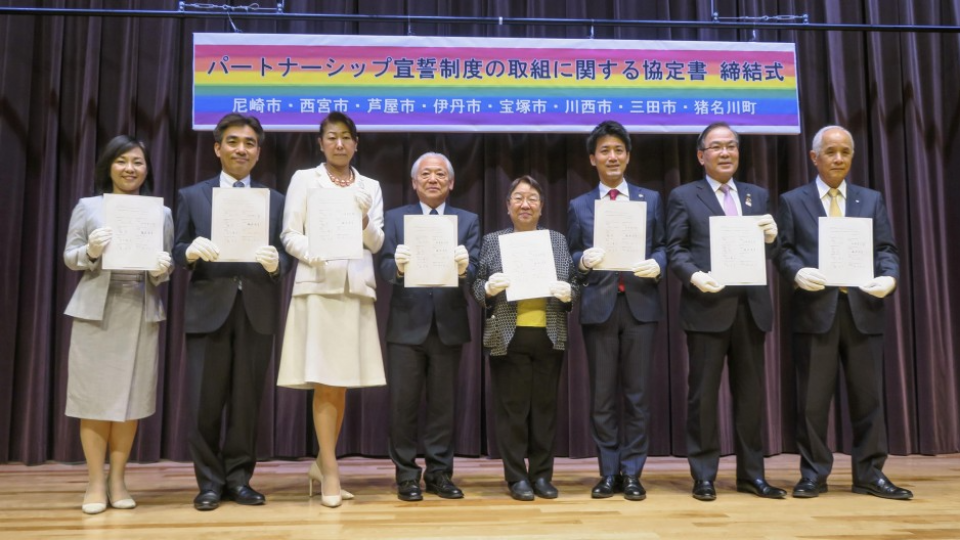 
More than 30 percent of the 146 local governments in Japan that have introduced a same-sex partnership system from January 1 have also signed reciprocal agreements with other municipalities to simplify reapplication procedures when LGBT couples move, according to a Kyodo News poll.

The move comes amid criticism that the need for a lesbian, gay, bisexual or transgender couple to dissolve a partnership and reapply each time they move causes emotional stress.

Cooperation between municipalities has accelerated since the cities of Fukuoka and Kumamoto in southwestern Japan signed such an agreement in October 2019.

As of January 1, five prefectures and 141 municipalities have introduced a same-sex partnership system, which covers more than 40 percent of Japan’s total population.

However, these associations are often not recognized beyond their jurisdictions, and none of them are legally binding, meaning that it is up to individual entities such as hospitals and real estate agents to decide whether or not to accept them.

Under reciprocal agreements between local governments, the certificate and other documents issued when the couple first applied for partnership can also be used in their new municipality of residence.

The couple is also exempt from having to provide documents showing that they are not married to another person.

According to the survey, the number of municipalities that had signed agreements with at least one other local government added two in 2019, 12 in 2020 and 46 in 2021.

Two additional cities in southwestern Japan, Ibusuki and Kagoshima, joined the list in 2022, bringing the total to 48 municipalities in 14 prefectures as of February 1.

All municipalities in Hyogo prefecture in western Japan and almost all in Kanagawa prefecture south of Tokyo have signed agreements, and many on the main island of Kyushu in the southwest have agreements between prefectures.

Osaka Prefecture is in talks with seven of its cities that have already introduced a same-sex partnership system, and five municipalities in Saitama Prefecture are also considering an agreement.

“Cooperation with other local governments will help spread and raise awareness of the system, which in turn will help sexual minorities improve their self-esteem,” said an official from Oi, a town in Kanagawa prefecture that has signed reciprocal agreements. with other municipalities.

However, some local governments have faced obstacles in concluding agreements due to the different scopes and conditions of their respective systems.

The city of Takarazuka in Hyogo prefecture, which limits its union system to sexual minorities, said it could not sign agreements with municipalities whose system also covers common-law marriages between heterosexual couples.