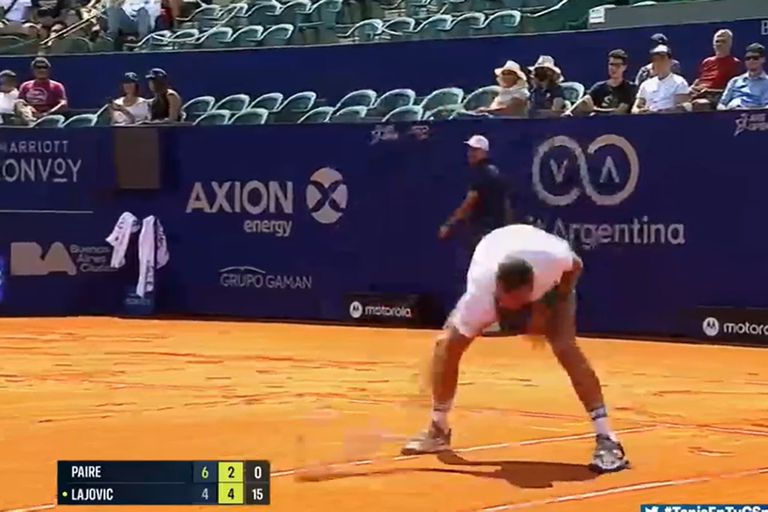 
Benoit Pair he did it again. On his return to Argentina Open After the incidents of last year (which deprived him of playing the Olympic Games with his country), the current number 54 in the world fell again in the first round of the tournament against Dusan Lajovic, by 4-6, 6-4 and 7-6 showing once again its two faces; the one of the talented tennis player with an extremely powerful forehand, and the one of the man who succumbs to pressure and breaks rackets out of frustration.

The game got off to an irregular start for both of them, gave up serve in their first games, but then it was the man from Avignon who took charge of the game, taking advantage of his great forehand and a very effective first serve, to take the first set 6-4. Until then, his body language was cool, calm, focused on the game.

However, it was from the second set that Paire’s vices began to be seen again. The Serbian, currently ranked 37th in the ATP ranking, began to play more and more in the background, harming the game near the French line, which was making more and more unforced errors.

It was when Lajovic was up 4-2 in this set that the most tense moment of the match came. After losing a point Paire reacted by hitting his racket against the surface, which caused applause and whistles alike from the Buenos Aires public. Ironically, it was this gesture that ended up making the winner of three ATP 250 titles also win over the public at the Central Court Guillermo Vilas, who began to celebrate his points by chanting his name. Anyway, the support it was not enough to reverse the disadvantage in the set, which ended up losing 6-4.

The match point that Paire wasted

After remaining immobile while waiting for the start of the final set, Paire returned to the court more focused, but it was difficult to find the break in the first few games. Gradually he regained precision on his hard forehands, and managed to put himself in a very favorable position serving 5-4. The Frenchman even had a triple match point, but was never able to win the match., and his unforced errors (particularly a smash that left him wide on one of his chances) led to the tie-break instance. There, Lajovic took advantage of his rival’s low mood and won the game 7-3 in the tiebreaker.

Without reaching the extremes of the last edition, where had a strong argument with an umpire, spat on the court and reluctantly played the last game of his loss to Francisco Cerúndolo, Benoît Paire gave one more example of his bad temper, which eventually ended up drag his mistakes, cut his shots and leave him out of the Buenos Aires ATP in the first round. Even so, or rather as a consequence of this, the Argentine public will continue to support him.