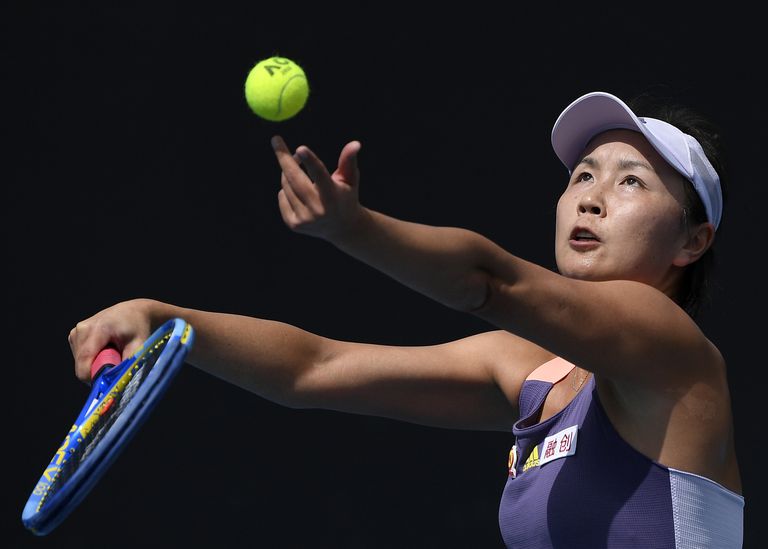 
The chinese tennis player Peng Shuai, 36 years old, met this Saturday with The President of the International Olympic Committee (IOC), Thomas Bach, during the winter olympics Beijing-2022, said the athlete in an interview with the sports newspaper The Team, in which He denied having suffered a sexual assault.

As reported by this medium, the tennis player shared a dinner with the president in which they talked “in a pleasant way.” “He asked me if I was thinking of going back to the competition, what my projects were, what I anticipate, etc.”, Peng explained during the meeting with journalists from L’Equipe in a hotel inside the Beijing Olympic bubble.

This is the first appearance in an independent international medium since November last year. She was described as visibly in good shape, dressed in red and black sportswear.

She took the opportunity to say that “she never disappeared”, after spending weeks without showing herself in public after denouncing last November on a social network that he had a forced sexual relationship for years with a Chinese leader. ”Simply, many people like my friends and people from the IOC sent me messages and it was impossible for me to answer so many messages. But with my close friends I am still in close contact, I have spoken with them, responded to their messages, and also with the WTA, “he added.

After her complaint, the Women’s Tennis Association (WTA) has maintained a firm position of demanding explanations from China about Peng’s situation. Peng’s complaint was deleted from the Chinese social network Weibo, and the tennis player disappeared from the public eye for weeks, raising fears about her situation, until appeared in a videoconference conversation with Thomas Bach on November 21.

On Thursday, two days before Bach and Peng’s meeting, The IOC said it would “support” the tennis player if she decides to demand the opening of an investigation into the allegation of a forced sexual relationship. “If she wants an investigation (on the complaint) it is sure that we will support her, but it has to be her decision, that is the way, these are her accusations,” Bach said at a press conference on the eve of the opening of the Games. from Peking.

Peng denied in the interview that he had reported a “sexual assault.” ”Sexual assault? I have never said that someone has made me suffer any sexual assault, “he insisted. When asked why the complaint message was deleted, she replied “because I wanted it that way.”

“My life has been as it should be: nothing special,” the tennis player commented when asked about her life after November. “First I would like people to really understand who I am: I am a normal girl, a perfectly ordinary tennis player. Sometimes I am serene, sometimes happy, sometimes sad. I can feel very stressed or under a lot of pressure (…) All the feelings and reactions that women have, I feel them too, “he said.

The IOC confirmed in a statement that Bach and former IOC swimmer Kirsty Coventry met with Peng, and pointed out that the tennis player would attend several events of the Beijing Games. “All three agreed that any communication about the content of the meeting would be at his (Peng’s) discretion,” according to the statement.

The Olympic body indicated that the IOC reiterated the invitation to visit its Olympic headquarters in Switzerland. In the interview, the tennis player announced the end of his professional career, Except, perhaps, “on a team of veterans,” he said with a laugh.

“Tennis completely changed my life, it gave me joys, challenges and much more (…) Even if I don’t participate in professional competitions anymore, I will always be a tennis player,” she said.

After the complaint, the player only appeared in some videos in which she attended sporting events, although it did not dispel fears about his full freedom of movement.